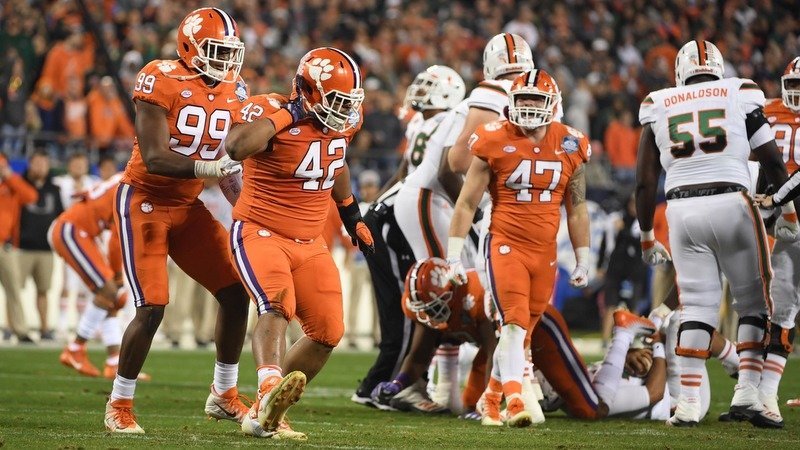 Christian Wilkins has a tough decision to make

The decision on whether to declare for the NFL Draft or stay in school another year is perhaps the biggest decision a college football player can make, even bigger than deciding on which school to attend. Millions of dollars might be on the line, and it isn’t to be taken lightly.

Sometimes, the best decision is to stay in school.

That’s the dilemma facing several Clemson players. Underclassmen have until Jan. 15 to declare for the draft and the official list of early entrants will be released by the NFL on Jan. 19. Defensive tackle Christian Wilkins, defensive ends Clelin Ferrell and Austin Bryant, linebacker Kendall Joseph, left tackle Mitch Hyatt and wide receiver Deon Cain still have decisions to make. Left guard Taylor Hearn, wide receiver Ray-Ray McCloud, and safety Van Smith have all decided to forgo their final season of eligibility and declare, while cornerback Mark Fields has decided to return.

According to NFL.com, the number of underclassmen who have applied to gain early entry into the Draft (“special eligibility”) has steadily increased in recent years. In certain cases, it may be the player’s best move; in most, though, the player may be drafted lower than he anticipated, or not at all. In these cases, the player has now forfeited the rest of his college eligibility and has given up his best chance to earn a degree while improving his football skills.

The article on NFL.com goes on to state: To help both the clubs, who want NFL-ready players in the Draft and the student-athletes, who are looking to enter the Draft early, the NFL relies on its College Advisory Committee. The Committee, which includes high-level personnel evaluators from NFL clubs and directors from the league’s two sanctioned scouting organizations (National Football Scouting and BLESTO), advises underclassmen on their draft prospects before they make a formal request to the league to join the Draft.

The ratings were revised a few years ago and are now much simpler: potential first round, potential second round, or neither, which is effectively a recommendation to stay in school.

The decision to go – or stay – has been met with mixed success for Clemson players in recent years. Vic Beasley came back for his senior season and turned in a performance worthy of a first-round pick. Nuk Hopkins was advised to stay but still wound up being drafted in the first round and is arguably the NFL’s best receiver. Artavis Scott left a year early, didn’t get drafted and spent this past season on the Chargers’ practice squad. Others have left early and it didn’t quite work out.

I get it – there are financial reasons for a player to declare. After three years in school, they want to provide for their families and they see the NFL as the chance to do just that. Others simply don’t like school and can’t wait to get on with their adult life.

Troy Vincent, who is the NFL Executive Vice President for Football Operations, cautions that if a player truly wants to one day earn a paycheck from the NFL, the smart choice is to stay in school.

“While some like to debate the advantages of declaring early for the draft, one thing is for certain: Completing your education affords you more opportunity and financial freedom beyond football,” Vincent said.

Check out these stats:

Ahead of the 2016 NFL Draft, the CAC evaluated 173 underclassmen, 65 of whom (37.6 percent) declared early for the 2016 Draft. Twenty-five of the 65 players received potential first- or second-round evaluations (two potential first-round picks and 23 potential second-round picks). Nineteen of the 25 (76 percent), were selected in the first two rounds. The remaining six were selected in the third (3), fourth (2) and fifth (1) rounds.

Since 2010, 85 percent of student-athletes who received a first- or second-round evaluation and declared for the Draft have been selected in the first two rounds.

Late Saturday, I began to hear whispers that McCloud and Smith were close to making a decision. Wondering what kind of draft grades the Clemson players have received, I started to dig. One advantage of Clemson’s ascendance into the college football elite is that you meet a lot of NFL personnel, whether on the field or in the pressbox and sometimes those relationships provide a bonus.

I was told the NFL advisory committee has told schools that the draft this year will be a little different. Due to the influx of a deep quarterback class, it will severely limit first round opportunities. I was told that Clemson had two players get second-round grades and no players with first-round grades. Let that sink in for a moment. The rest were either strongly recommended to go back to school or received no grade at all.

I argued back – we’ve all heard about Christian Wilkins and his first-round talent, as well as Mitch Hyatt and Clelin Ferrell. Surely they received first-round grades. I was told to look at it this way – Lamar Jackson, Sam Darnold, Baker Mayfield, Josh Rosen, Mason Rudolph, Luke Falk and Riley Ferguson are all likely to be taken high in the draft. At least six of them are expected to go in the first round, which means teams that take a quarterback first are more likely to fill needs with the next pick as opposed to the best available player.

In other words, players have to be physically AND technically ready to dominate to be considered in the top 20. Guys like Vic Beasley, who had 14 sacks in 2013 but came back to school and recorded 21.5 tackles for loss and earned a first-round pick.

It’s a tough decision to make, for the players themselves and their families, the most difficult decision of their young lives.