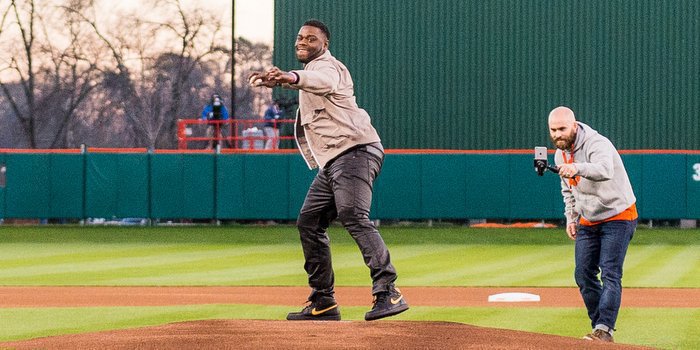 CLEMSON – With Shaq Lawson, Jonathan Meeks and Sammy Watkins in Buffalo, the Bills have recently been known as Clemson North, and Lawson hopes to continue to add to the Tiger contingency already in Upstate New York.

“I’m excited to have a full offseason with my shoulder at 100-percent. I haven’t had a full offseason at a 100-percent in a long time,” Lawson said last week at Doug Kingsmore Stadium, where he threw out the first pitch. “I can’t wait to go out there and show them my ability and put a full season together next season.”

Coming off of shoulder surgery, Lawson played in just 10 games for the Bills, tallying 13 tackles, two sacks and a forced fumble, but he said he’s looking forward to working with a new coaching staff and moving back to a familiar defense.

“We’ve got new coaches in Buffalo, and we’re going back to what I like to do in a 4-3 defense,” he said. “It’s going to be a special season for us. We made a lot of moves to open up new doors.”

However, when he travels back to Buffalo after the NFL Draft, he hopes there will be at least one familiar face in the locker room.

“We would love to have one of those guys and to have a Clemson teammate up there. Mike (Williams) or Deshaun (Watson), either one would be a great pick for us,” Lawson said of his former teammates.

Even if the Bills don’t take for Clemson quarterback Deshaun Watson, Lawson had a message for league officials and General Managers.

“If y'all don’t take Deshaun Watson as the number one quarterback, you’re crazy,” Lawson said. “I just can’t see Mitch (Trubisky) being better than him, and I actually played against him. I played against Deshaun every day in practice, and there is no comparison between those two.”

For his Clemson brethren, Lawson extended some advice on how to make the successful transition from college to the pros.

“I told those guys about the process and the Combine. I told them that it’s going to be different than Clemson,” he said. “You build relationships with guys in college, and you’ll have those guys for a long while, but when you get to the NFL, it’s different because guys have a wife and a family now, so you’re not going to have those same relationships like you did in Clemson, so cherish every moment. When it’s time to go in the league, it’s a straight business. It’s a little crazier than what I first thought. It’s a business every day, so you never know what the mood is going to be. You just have to come in there and work every day. The game in the NFL is what people have always dreamed about – playing on the big stage against the best.”