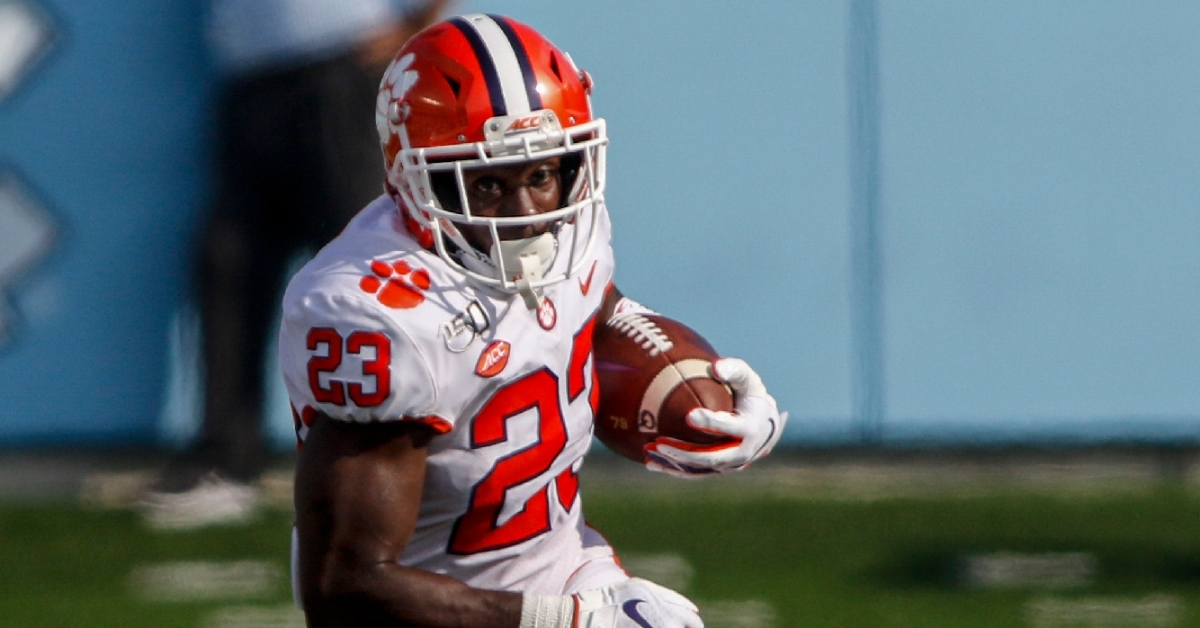 CHAPEL HILL, NC – It wasn’t pretty and it was far from Clemson’s best game but a late-game stop on a two-point conversion keeps the Tigers undefeated.

Clemson took its first lead of the game in the fourth quarter and held on for dear life to a 21-20 victory over North Carolina Saturday afternoon at Kenan Stadium.

OFFENSIVE PLAYER OF THE GAME:Once Trevor Lawrence got Tee Higgins involved in the game, the offense found a little bit of a rhythm. Higgins was the only consistent player on offense Saturday afternoon. Higgins was targeted eight times and caught six passes for 129 yards a touchdown. His 38-yard touchdown reception gave Clemson a 21-20 lead, it’s first of the game.

DEFENSIVE PLAYER OF THE GAME:Isaiah Simmons continues to be a bully on defense. No matter where he’s lined up, he makes plays and is probably the defensive MVP to this point in the season. Simmons ended the game with 10 total tackles, one sack, two-and-a-half tackles for loss and a pass breakup.

*Tigers seal the deal – The Heels responded with a long scoring drive that took the heart out of the Clemson defense, marching 75 yards in 16 plays and took over 8:35 off the clock. UNC converted on fourth down twice on the drive and got the touchdown on a one-yard dive from Javonte Williams for the score. With 1:17 to play, Brown elected to go for the two-point conversion and the possible win, but James Skalski and Xavier Thomas stopped the wide pitch a few yards short of the goal line and the Tigers led 21-20 with 1:17 to go.

*Momentum shift – UNC put together a decent drive early in the fourth quarter and faced a 4th-and-1 at the Clemson 45. UNC head coach Mack Brown – with his defense playing well – elected to go for it but the Heels were stopped for no gain and Clemson took over on downs. Six plays later Lawrence threw a strike to Higgins down the left hash for a 38-yard scoring toss and Clemson led for the first time on the day. With 9:54 to play Clemson led 21-14.

*Tigers on the board – The teams traded punts over the next few series, but the Tigers finally found a rhythm. Taking over at their own 11, Clemson put together a 10-play, 89-yard drive for the score. A 16-yard pass to Tee Higgins and a 31-yard pass to Justyn Ross set up Etienne’s 13-yard touchdown run. With 12:43 to play in the half, the score was tied at 7-7.

Tie ballgame – The teams once again traded punts and Clemson took over at its own 22 with just over five minutes to play. A 16-yard run by Lawrence and a 31-yard pass to Ross put the Tigers in UNC territory. Facing a crucial third down, Lawrence was flushed from the pocket and moved towards the right sideline before throwing a 16-yard dart to Higgins on the sideline. A few plays later Lawrence carried the ball in from four yards out and the score was tied at 14-14 with just 33 seconds remaining in the half.

STAT OF THE GAME:In the third quarter, Clemson had 57 total yards, while North Carolina had just 20.

UP NEXT: Clemson gets a much-needed week off before returning home to host Florida State.

North Carolina travels to Georgia Tech for a 4:00 p.m. matchup with the Yellow Jackets.