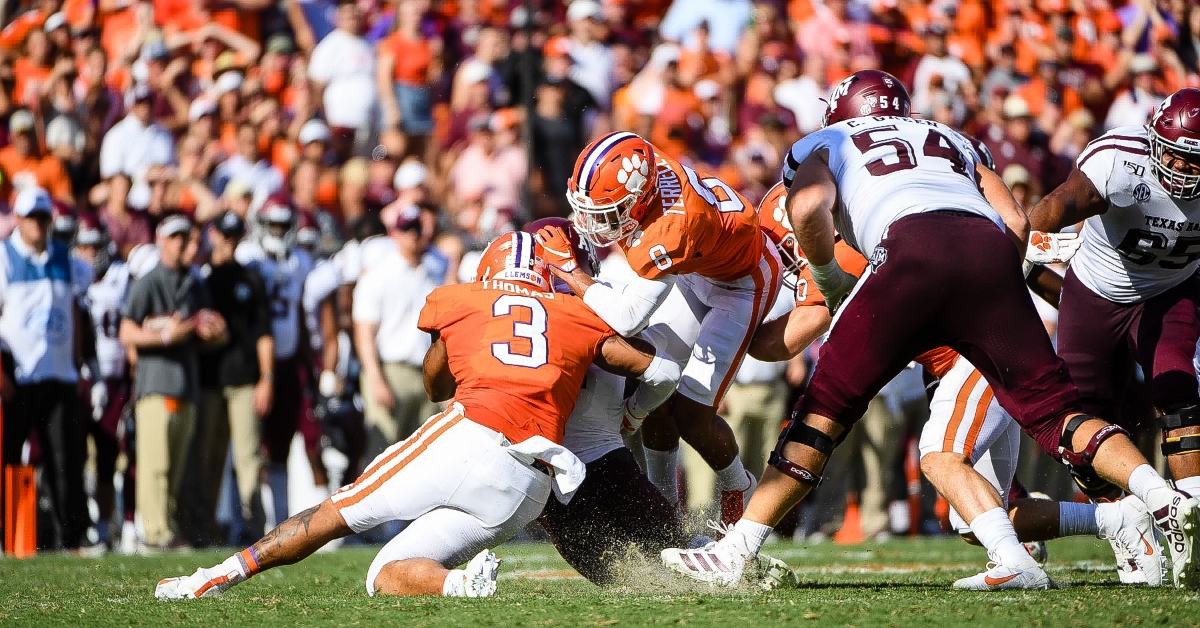 CLEMSON – After a slow start, Clemson came alive in the second quarter.

A redzone stand by the Tiger defense early in the second quarter sparked the offense as quarterback Trevor Lawrence settled in leading Clemson to a 17-3 halftime lead over Texas A&M Saturday afternoon in Death Valley.

PLAYER OF THE HALF: Lawrence got off to a slow start but found his groove in the second quarter. He finished the half with 16 completions for 188 yards and a touchdown. He also added a rushing touchdown just before halftime.

STAT OF THE HALF: Clemson's defense held the Aggies to just 2.6 yards per rush in the first half.

*Clemson's defense was gouged for over 500 yards last year in College Station but held the Aggies to just 93 yards in the first half Saturday. Quarterback Kellen Mond was held in check, completing just 5-14 passes for 51 yards

*The Clemson coaching staff has wanted Travis Etienne to be a bigger part of the passing game, and he picked up a blitzer for a key block on Clemson's first drive. On the Tigers' first scoring drive, Etienne took a quick screen and rumbled 27 yards for a first down.

*The defense allowed a 16-play scoring drive to the Aggies that took almost eight minutes off the clock. ON a hot day, the defense needs to get off the field faster.

TURNING POINT OF THE HALF: Clemson’s defense stood tall in the redzone early in the second quarter, holding A&M to just a field goal after Nolan Turner missed a tackle on third-and-long setting the Aggies up on the 15.

After A&M took the lead, Clemson’s offense finally got going. The Tigers first drive of the second quarter was a nice mix of Travis Etienne and Lawrence finding his rhythm. On 3rd-and-11, Lawrence rolled to his left and found a wide open Justyn Ross in the endzone after the A&M defensive back bit on the quarterback run.

WHAT CLEMSON NEEDS TO DO TO WIN: Offensively, Clemson needs to get the ball into the hands of Travis Etienne. Not only is Etienne as an explosive runner but it opens the offense up when he’s having success. The Clemson offense started having success in the second quarter when Etienne got going.

Defensively, Clemson needs to keep A&M running back Jashaun Corbin in check. Corbin had 12 carries for 31 yards in the first half. The Tigers need to make the tackles when they’re there and keep Kellen Mond in the pocket. Mond was all over the place with his throws in the first half and very rarely was he able to get outside the pocket.