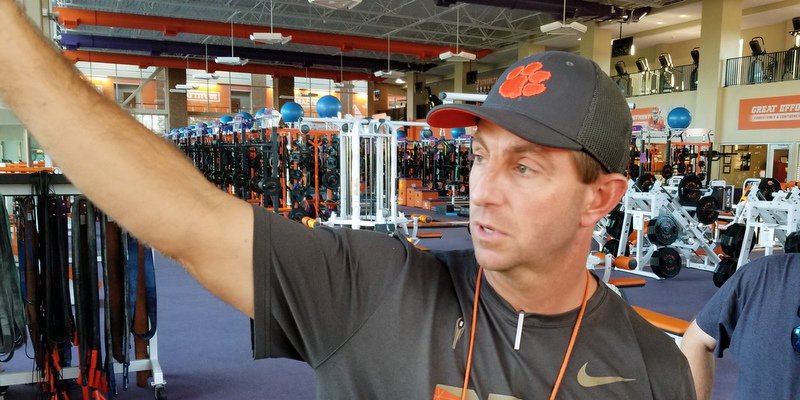 Dorian O'Daniel has two interceptions returned for touchdowns this season

Dabo Swinney defending his players, trainers swimming the moat to help a person delivered in a car accident, and the head coach making a plea for students and fans to show up early and stay late for Saturday’s home game against Wake Forest.

You know, just another week surrounding the Clemson program.

The car accident that spurred several members of the Clemson staff into action Tuesday made several headlines this week, and we spoke at length with Swinney about it after Wednesday’s practice. Imagine the feeling for Swinney, however, when his son Will (a wide receiver on the team) recognized the car and realized it was one of his friends, a young man that Swinney coached in youth baseball.

Swinney later went to the hospital, and while waiting in the emergency room, a woman slipped a sticky note to his wife, Kathleen. The note simply stated that she was a Clemson fan, her mother was in ICU and she wanted the Swinney’s to pray for her.

Kathleen gave the note to Dabo, who went over and prayed with her in the waiting room. That tells you all you need to know about the head coach at Clemson.

*Moving on to Wake Forest – people in the Clemson program knew that Boston College was going to be a tough out, and the Tigers were tied with the Eagles at 7-7 at the end of the third quarter. The Demon Deacons are better than Boston College, and the staff knows that Clemson will have to execute at a high-level Saturday.

This is an odd schedule for Clemson – the Tigers played five games in the month of September, and three of those were against ranked teams. Clemson plays Wake Forest Saturday and has a short week to prepare for the Syracuse game, which falls on a Friday. Then it’s the off week. It would be easy for the players to already start to exhale after a grueling start to the season, but Swinney walked into the interview room on Tuesday on a mission – he wanted anyone and everyone to know that even the slightest hiccup this weekend will result in a loss. 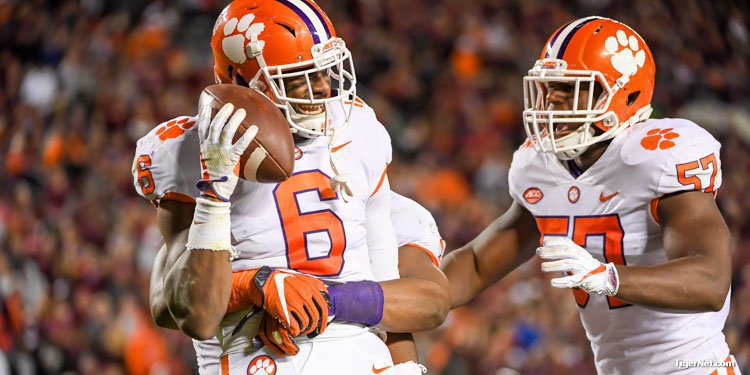 Dorian O'Daniel has two interceptions returned for touchdowns this season"

As for the noon start – rumors began to float around late Wednesday that the Florida St.-Miami game, already rescheduled for this weekend at 3:30, could be moved again. The game was originally scheduled for September 16th but was moved as Hurricane Irma made landfall in Florida.

But Tropical Depression 16, which may become Hurricane “Nate” if it forms, could cause the game to be moved to noon. If the move does happen, Florida State could potentially trade starting times and TV setups with the Tigers, who are scheduled to play the Deacons at noon on ESPN2.

*Wake Forest head coach Dave Clawson told the media this week that he thought this might be the year the Tigers take “a little dip.” That notion was dispelled when he watched film.

“I would say that watching them on film, they are playing as well as any team in the country. It is a credit to Coach Swinney and his whole coaching staff,” Clawson said. “Every year I look at depth charts. I looked at Clemson last year and thought this kid is graduating and this one will leave early. Ok, maybe next year is the year that they take a little bit of a dip. Somehow, someway, they lose all these really good players and then come back and are just as good, if not better. Right now they are probably playing better overall football now than when we played them a year ago, when they went on to win a national championship. That is a credit to Coach Swinney and his staff for the level of recruiting and player development. They lose great players and replace them with great players.”

*It’s always fun to share a laugh with this team, and Tuesday was no exception. I asked linebacker Dorian O’Daniel – who leads the team in touchdown receptions with two due to his two pick-sixes (I know, not really, but it’s fun to talk about) – about his interception at Tech.

O’Daniel laughed and said that it bounced off of the receivers’ hands and then the helmet, and he was able to snatch the ball out of the air and score. Of course, big linebacker Tre Lamar had a crushing block on the play, and Lamar said he received a small amount of credit from O’Daniel on the hit.

“I got my little thank you afterward but everybody loves the dude who got the pick, not the one who blocked, but it's straight,” Lamar said with a smile.

*On the recruiting front: It looks like Tennessee head coach Butch Jones’ days in Knoxville are numbered, and Clemson offered 2018 defensive back Jaycee Horn recently. Horn is hopeful to make it back for the Georgia Tech game at the end of the month, and that’s shaping up to be a big recruiting weekend for the staff.

As for the Tennessee commits, it’s worth keeping an eye on 5-star offensive lineman Cade Mays and safety Brendon Harris.

*I received an email Tuesday from the Shrine Bowl of the Carolinas. This year’s roster will be announced Sunday, and it looks like several Clemson commits should make the roster. They include linebacker Jake Venables, wide receiver Derion Kendrick, kicker B.T. Potter and defensive tackle Josh Belk. Clemson defensive end target K.J. Henry should make the North Carolina roster.