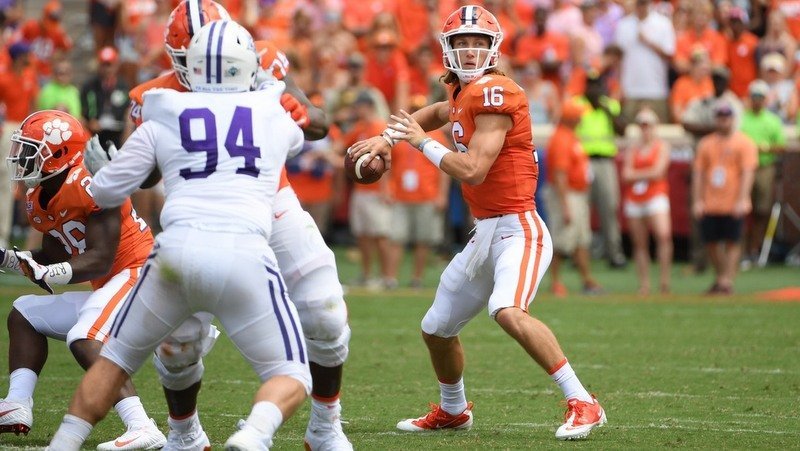 CLEMSON – Saturday’s season opener should have been about the veterans and a much-needed tuneup before next Saturday’s primetime matchup at Texas A&M. Instead, it was all about the freshmen.

The Tigers had 531 yards of total offense - 277 through the air and 254 on the ground. Clemson's defense had 10 tackles for loss, including three sacks.

“I think we had a nice balance today. We were able to play so many people," Clemson head coach Dabo Swinney said. "We didn’t commit any turnovers and committed only four penalties. The depth showed up for us today. We got all three quarterbacks in the game [and] there were a lot of opportunities for players to touch the ball.

“It doesn’t matter how talented these guys are; for anybody, the first college experience is a big deal. No matter how much you practice, it’s hard to simulate game day. Overall, there’s a lot we can coach off of, but I was pleased with what we did offensively. Defensively, our guys set the tone and created two turnovers.” 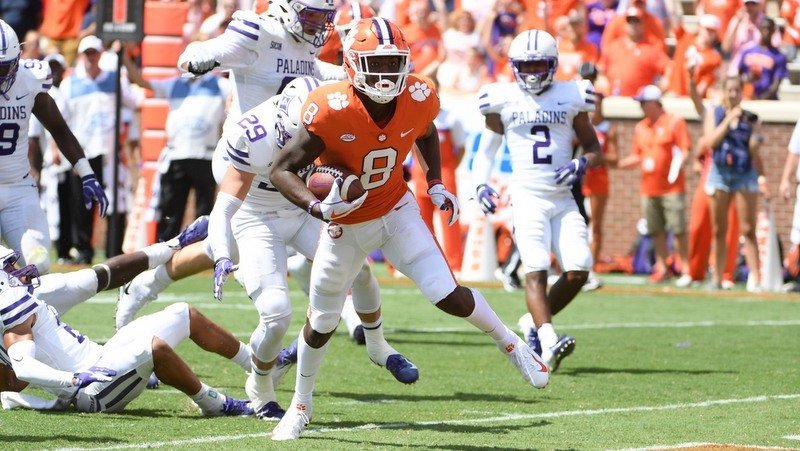 “Hats off to Clemson...they were as advertised. I thought our defense played really well for about a half," Hendrix said. "When that call right was overturned before halftime, they came down and scored, and we gave up two scores. Offensively, we struggled all day, but I thought our kids fought and hung in there. We’ll watch some tape, and there’ll be some good and bad stuff. The two freshman quarterbacks, I thought, handled themselves pretty well under the circumstances. I like this bunch. We just have to go back and get better. We certainly won’t see another group like this for the rest of the year. At least, I hope we don’t.”

Clemson turned the ball over on downs after its first offensive possession but struck pay dirt on the second. Following a Furman punt, Kelly Bryant hit Amari Rodgers on a perfectly thrown 40-yard touchdown strike, putting Clemson ahead 7-0 with 7:50 to play in the first quarter. The touchdown was the first of Rodgers’ career.

Rodgers set up Clemson’s second score with a 62-yard punt return that featured his stiff-arm of Furman punter Grayson Atkins, buying him another 20 yards. The Tigers failed to get a first down, however and settled for a 35-yard Greg Huegel field goal for a 10-0 lead.

“We want to be one of the best special teams groups in the country. We have the right roster to be elite," Swinneys said. "You saw that on kickoffs and punt returns today. Cornell Powell had a 43-yard punt return. We expect our special teams to not only keep us in games, but also win us some games.”

Trevor Lawrence entered the game on the next series and engineered a scoring drive that ended with a 49-yard field goal by Huegel for a 13-0 lead at the 9:19 mark of the second quarter. The 49 yards matches his career high.

The Tigers took over at their own five following a Furman punt and Lawrence once again put together a scoring drive that covered 95 yards. The first third down play of the drive was overturned – Lawrence threw high to Trevion Thompson on the sideline and it was originally ruled incomplete. The call was overturned after a lengthy review. A few plays later the Paladins jumped offsides and Lawrence, aware he had a free play, threw a 42-yard pass to Cornell Powell. Two plays later he threw a six-yard dart to Diondre Overton for a touchdown and Clemson led 20-0 late in the first half.

A short punt gave the Tigers the ball at the Furman 38 and it took the Tigers just five plays to reach pay dirt. Travis Etienne capped the drive with his first touchdown of the season and 14th of his career, taking a handoff from Lawrence and rumbling eight yards for the score as Clemson led 27-0 with 1:03 to play in the half.

The Tigers turned it over on downs on the first drive of the second half, but Bryant used his legs and arm to get Clemson on the board midway through the third quarter. A 38-yard pitch-and-catch between Bryant and Derion Kendrick set up Bryant’s 25-yard scoring run and Clemson led 34-0 with just over five minutes to play in the third quarter.

Bryant’s day was done at that point and he finished 10-of-16 for 127 yards and a touchdown through the air and carried the ball five times for 44 yards and another score.

A punt pinned Clemson at its own eight on the ensuing possession but it took the Tigers just three plays to score. Freshman Lyn-J-Dixon popped a 16-yard run on the first touch of his career and then followed that with a 61-yard run that put the Tigers at the 15. Lawrence hit Justyn Ross on a slip screen and Ross raced into the endzone for a 41-0 lead with just a few seconds left in the third quarter.

With the Paladins facing a third-and-long deep in their own territory, Baylon Spector recovered a Furman fumble at the 12-yard line. Two plays later Lawrence hit tight end Braden Galloway on a short touchdown throw and Clemson led 48-0 with 13:42 to play in the game.

Lawrence was done at that point, and he finished 9-of-15 for 137 yards and three touchdowns. Dixon led all runners with six carries for 89 yards, while Etienne added 63 yards on 11 carries. Rodgers had three catches for 44 yards and the score.

The Paladins added a touchdown pass with 1:18 remaining to account for the final points.

The Tigers return to action next Saturday, traveling to College Station to take on Texas A&M in a 7 pm kickoff. The game will be televised by ESPN.

Clemson vs Furman Boxscore
Get the latest Clemson gear right here!
Comment on this story