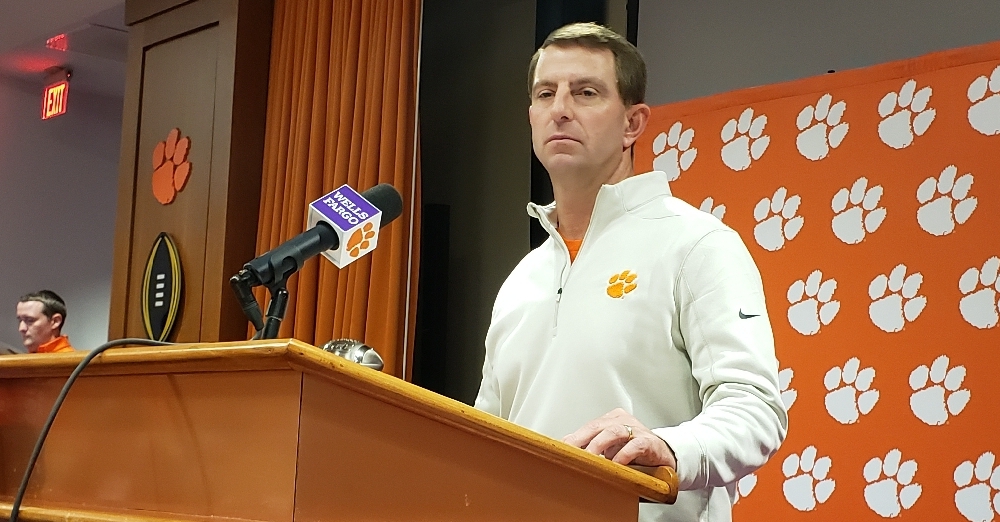 Swinney talks to the media Tuesday at his weekly press conference.

CLEMSON – Pastor Dabo Swinney was again back in the pulpit Tuesday, taking up for his team and his league as only he can.

The Tigers are preparing to take on Virginia in the ACC Championship Game Saturday at Bank of America Stadium in Charlotte (7:30 pm, ABC), and Swinney was asked about the perception that the Atlantic Coast Conference is weak.

The next 10 or so minutes of the press conference were Dabo at his best, and instead of trying to break up quotes, I will let his comments tell the story.

On the ACC and what he’s seen from the league

“I saw a guy like Sam Howell. I saw Mack Brown come in and take North Carolina to a bowl," Swinney said. "We have ten bowl teams and I think that's 42 bowl teams in four years. To me, it's more of the same, just consistency. Some years you might be a little more top-heavy with teams than maybe other years, and we've certainly had that where you know it's been us and Florida State and you know a couple other teams that are pretty doggone good and then we've had some years like this year where you just kind of have a lot of people kind of clumped in the middle if you will. But it's a deep league.

“Ten teams made bowls. There's a lot of teams that can win and they've had winning seasons, so I think that kind of speaks for itself. Our league never gets the credit, doesn't matter what we do and it's been that way forever. Our league doesn't get a lot of recognition for what's happened, but we've been very successful as a league. Three out of the last six national championships. All these other things are perception-oriented and who's ranked what and this and that. You don't play everybody, so it's a lot of hypotheticals but I just know what I know and I know what reality is, not what people tell me. I know what reality is and this is a very good league and has been for a long time. I don't think this year is as good as maybe a couple years ago as far as just maybe the strength of some of these teams. Obviously, they've had transition at Florida State and a few coaching changes and things like that. But listen, it was just a couple years ago Lamar Jackson is over there playing it at Louisville. You look at all the quarterbacks that play in the NFL right now, a majority of them are from the ACC.”

“The media. That's what drives everything and that's what drives every perception and that's what gets put out there. That doesn't mean there's bad people out there, it's not chastising anybody. But I just think other programs get the benefit of the doubt from time to time and for whatever reason, our league certainly doesn't really get the benefit of the doubt. If there was another team out there that was coming off a 15-0 season and had beaten a team by four touchdowns they would. I think people should focus more on who we are and not who we so-called play.

“I could understand that if we were a new kid on the block, but we've been around here a long time. We've had nine straight ten-plus win seasons, we're the second-winningest team in the decade, us and Alabama. We've played everybody. Every year we play the same schedule. I think the biggest thing is just sometimes people create storylines in the offseason and then sometimes it doesn't add up. We weren't supposed to be very good on defense this year. Last year's team, we had a lot of those superstar guys and we were portrayed differently and the crazy thing is this team is playing way better than last year's team and it's really not even close. They still talk about a close game in North Carolina. It still gets talked about.

“Trevor Lawrence threw a few interceptions early in the season they don't talk about all the touchdowns since. Trevor - if they thought he was good last year - he's so much better now than he was last year at any point. He is twice the quarterback right now than he was in the national championship game when everybody was crowning him the king of football. He is twice the quarterback, right now today, and people have missed it because there's just been this rhetoric all year long.

“It's not me chastising anybody at all. Everybody does their job. I just don't think our team has been portrayed properly and I think people have missed out on a beautiful football team. James Skalski is a beautiful football player. Oh my goodness. Travis Etienne - what a year he's having. It's incredible. We've dominated 11 out of 12 games and some people say (that) we've only been good since North Carolina. No, we've been great all year. We've dominated every single opponent. Texas A&M was the 12th ranked team in the country when they came in here. Nobody knows anything about that stuff, so all of a sudden we beat them and now they're not any good. It's just driven by perception.

“It's not who we play it's how you play. It's who we are and who we've been. I went on First Take and I'm asked a question - there was debate - like if we go undefeated we shouldn't be in the playoff. That's the type of conversation. And then people get amnesia this time of year. Now suddenly last two or three weeks everybody says, 'Oh, Clemson is a great team.' We're the same team we've been all year. It's just now you know they have to recognize that. But it's really not any different than it's been all year. I don't know why but I just think that sometimes we don't get the benefit of the doubt and that's a shame.”

On the Playoff Committee and how his team is portrayed

"The story instead is who we play. It's been about we played a close game. It's about how we don't play anybody, which is total disrespectful for other teams. Oh, and Trevor threw a couple of interceptions. Trevor Lawrence should be a Heisman finalist. It's been unbelievable what he's done. It's incredible what this team has done. They are better in every area as a football team than that team that went 15-0 last year, at this point. Now will they finish? I don't know. We're good enough to compete for our league, so we're gonna get a shot to do that. I think a lot of people have missed some beautiful football with this team. What this back-seven has done is unbelievable. It's the best back-seven I've coached.

“I think we've had seven wins of 30-plus points or something like that in a row, and people create other storylines to kind of try to diminish what's been accomplished. My passion is our program and my passion is these players. From time to time I think as a leader you got to speak up, simple as that, and not let other people diminish what's been accomplished.

“I just try to tell the truth the way I see it.”

ESPN’s Paul Finebaum (@finebaumshow) said Dabo Swinney was the most annoying winner in sports and in need of a timeout and a pacifier after comments about perceived disrespect for his #Clemson team. Swinney took the comments in stride on Tuesday.