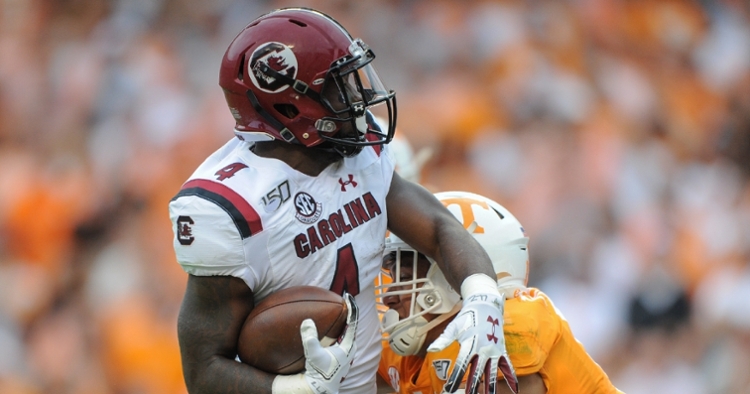 CLEMSON – Clemson players and coaches will see a familiar face when they take on South Carolina in Columbia at the end of the month. Former Clemson running back Tavien Feaster made the decision late last summer to use his final year of eligibility with the Gamecocks, but it doesn’t change to love the Tigers feel for their former teammate.

Feaster, who earned his undergraduate degree at Clemson, won two National Championships in the Upstate and ended his Tiger career with 1,330 rushing yards and 15 touchdowns on 222 carries and 23 receptions for 183 yards and one touchdown in 674 snaps over 41 career games (11 starts). He ranked second in Clemson history in career yards per carry (5.99) behind only Travis Etienne at of the conclusion of the 2018 season.

He has rushed for 625 yards this season on 112 carries and caught 13 passes for 79 yards, and Clemson players say it will be different seeing Feaster in the garnet and black.

“It’s going to be different for sure. I only played with him for a year, but obviously we had a good relationship, and it’ll be strange,” Trevor Lawrence said. “I’m sure really weird for some of the other guys that played with him for three years. It’ll be good to see him, though.”

Offensive lineman Matt Bockhorst called it unorthodox for Feaster to move to the Tigers’ arch-rival.

“It’ll be weird seeing Tavien wear those colors. Tavien made a decision he needed to make for himself and it was certainly unorthodox,” Bockhorst said. "It hasn’t happened very often before. I mean, Josh Belk sort of switched. Tavien’s a friend of mine, it’s all respect. I’ll be excited to see him after the game, and since we’re both on offense I won’t get to play against him in the game. I hope he’s doing well down there.”

Center Sean Pollard still has Feaster’s number in his phone.

“It will be a little different because his name in my phone is still what he put in there as Tavien Feaster with two tigers (emojis) next to it,” Pollard said. “I know our defense will mess around with him and I hope I get to see him before the game and share a few words with him. He’s a brother for life and teammate for life, and I know he had to make a business decision but we all respect him for it.”

“I haven’t kept in touch with him because I want to respect the rules,” Elliott said. “But I know some of the guys have. I know Travis (Etienne) has been talking to him. I know they go back and forth, and everything that I’ve heard has been positive. I hate that he’s banged up a little bit but I am sure he will do everything he can to be back for this game. I have nothing bad to say about him. You know, Tavien is one of mine. Tavien is still one of mine. He graduated from Clemson and he gave me his heart and blood and sweat and tears for three years. I am wishing him the best but I know our guys will be geared up to compete against him.”