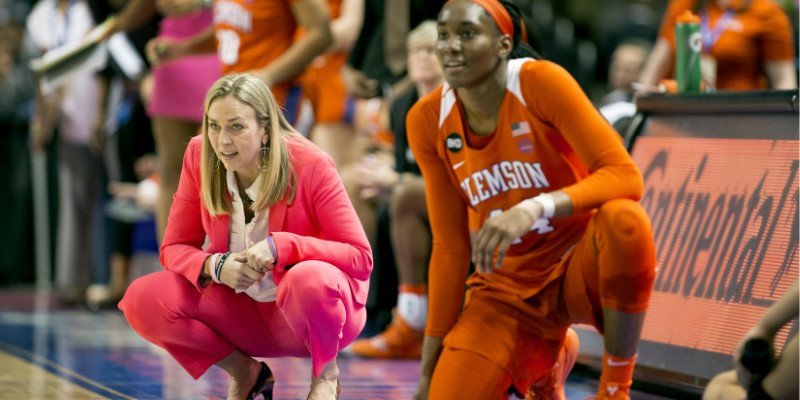 SUNSET – What does Amanda Butler hope to do for an encore? Just get better every day.

Butler entered last season without a lot of expectations for a team that had suffered through several down seasons. Instead of continuing the downward spiral, however, the Lady Tigers put together a 20-13 season, including a 9-7 mark in the ACC. It was the program’s best season in 17 years, which landed them in the NCAA Tournament for the first time since 2002.

And it all happened in Butler’s first year as head coach.

The Tigers are also coming off their most conference wins since 2002 (9). Butler was named the league’s Coach of the Year following her first season at the helm. Clemson won three games against top 25 teams in 2018-19, all coming in ACC play.

Just like last season, however, there are no goals except for one – get better every day.

“That's hard. We didn't even go into last year with, 'Here is what we want to accomplish' or 'Here is what we think we can accomplish.' We went into it with a mindset of having an open mind and let's just discover what this team can be and let's not limit them by maybe assigning some goals that might not fit them,” Butler said during basketball media day at The Reserve Wednesday. “I really like that approach of let's just try and get a little better each day and see where we end up. I think we have the right folks in the locker room, that if we stay committed to that idea of improving just a little bit every single day then we are going to be a place where we want to be when it's all said and done.”

She likes what she sees so far.

“We have a couple of practices under our belt and we are really excited about the start. We have a lot of rough edges to kind of smooth out and a lot of things to learn and discover about this team because there are so many new pieces, but I really like the things that make a team special and what I see in this team,” she said. “I see how they love each other, the chemistry, how hard they are working through trying to learn things and trying to do those things together.

“It has been a really, really positive start and we are ready to see what the year brings.”

Butler was asked how she sells her team on her process and she said doesn’t have to sell her players anything.

“I don't really think of it as selling. The thing I really want to spend on with my team is that we are going to do things a certain way,” Butler said. “We talk about TLC all the time, and 'C' is commitment and a way of doing things that distinguishes us from everybody else. And our team takes great pride in that and we take great pride in doing things our way. There is certainly buy-in and other things that are a part of that process.”