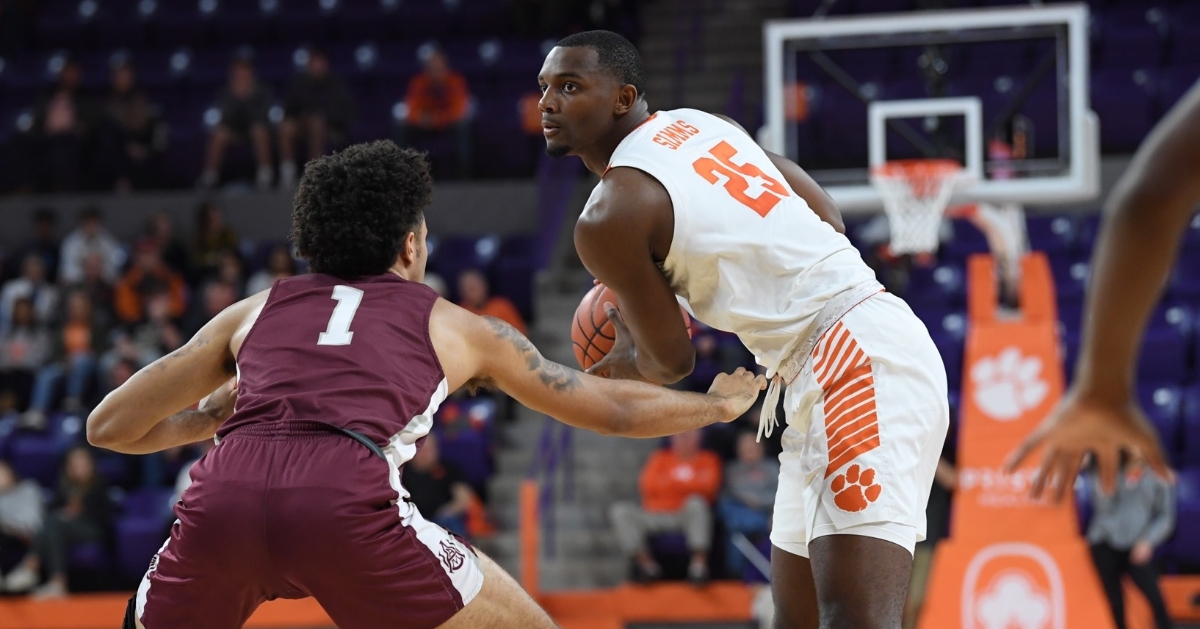 The Tigers scored 54 points in the first half, the most any team has scored in the Brad Brownell era.

A Clemson 23-0 run in the first half gave the Tigers an early cushion and helped them coast to the win.

Clemson’s defense held Alabama A&M scoreless for over six minutes during the run.

Graduate Tevin Mack had a team-high 14 points in the first half and finished with 16 for the game. Freshman Al-Amir Dawes led the Tigers with a career-high 19 points, shooting 7-11 from the field, including 3-6 from 3-point range. Hunter Tyson added 10 for the Tigers. Sophomore Trey Jemison also reached a new career-high with 10 points on five of five shooting. He also added five rebounds.

“We played a pretty clean game," head coach Brad Brownell said. "It was a fun night because we got to put some guys in that were working pretty hard for us. At the end of the game, they got to play some significant minutes, so it was fun for them, as well. I am really pleased with O’Neil [McBride], Parker [Fox] and Wells [Hoag].”

The Tigers opened the game on an 8-0 run to give themselves the early lead over the Bulldogs.

With 13:35 left in the first half, Dawes drained a three-pointer to put Clemson up 11-5. At the 12:35 mark, Dawes sank another three to put the home team up 14-7. Out of the under twelve timeout, graduate Curran Scott nailed a triple to up Clemson’s lead to 19-7.

The next possession, sophomore Hunter Tyson swished a three to put the Tigers up 15.

With 4:50 left in the first half, sophomore John Newman III posterized a Bulldog defender to up the lead to 42-16.

After a hot start in the first half, the Tigers cooled down, only scoring 21 points in the first 13 minutes in the second half.

New walk-on Wells Hoag sank his first two baskets ever as a Clemson Tiger, one being a three-pointer. He finished the game with five points.

“You know it’s funny. It’s kind of an interesting story," Brownell said. "He’s a guy who was a Bridge student his first year, so this is his first year at Clemson. Now, he’s a part of the team. We already have a lot of walk-ons, so we’ve done this with a couple of guys where they become manager. We know this is a guy who could become a walk-on next year. You need to earn your spurs and see if you really want to do it for the right reasons. He’s been great, and he’s worked really hard. We put it into motion, and it took about a week to get him where he could actually play in a game. We’ve been working on it. He only knows about a quarter or a third of the playbook. Physically, he’s a pretty good-sized kid. He’s a bright kid. He’s competed very hard and done stuff with our guys. He showed today that he can play a little bit. He was very good. All those guys did a very good job out there.”

Clemson goes to 4-1 on the season as they prepare to head out to Las Vegas for the MGM tournament.

They take on TCU in the first round at 10:30 p.m. Eastern Time on Sunday (ESPN2). They are guaranteed a second game against either Colorado or Wyoming.

Clemson vs. Alabama A&M box
Get the latest Clemson gear right here!
Comment on this story