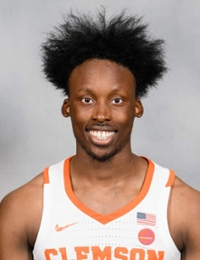 Guard
B I O
Before Clemson
Came to Clemson as a four-star prospect … ranked No. 5 in the state of North Carolina according to Phenom Hoops … ranked 42nd at his position nationally according to ESPN … led his team in scoring and scored 24 points and was named MVP of the NCISAA 3A State Championship game … selected to the NCISSA all-state team for the second consecutive season as a senior and was named to the PACIS all-conference team for the third-straight year … three-time state champion … finished with 1,400 points, 500 rebounds, 200 assists and 100 steals in career at Greensboro Day School … chose Clemson over Providence, Wake Forest, Georgia Tech and Boston College.