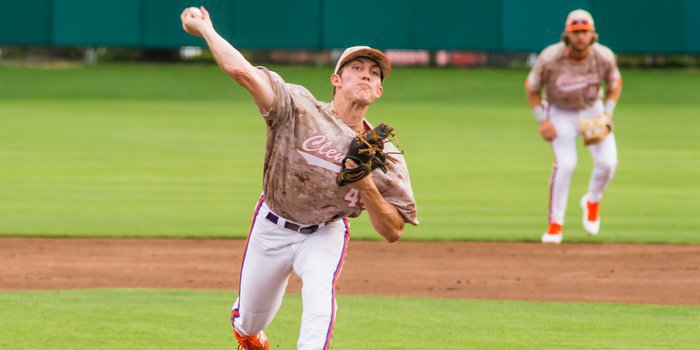 Twelve of the 16 games played before Tuesday night had been played on the road, but Clemson began a 13-game homestand with a 12-0 rout of Georgia at Doug Kingsmore Stadium Tuesday evening, snapping a three-game losing streak.

Chris Okey hit a grand slam and drove in five runs while Seth Beer drove in three as part of the Tigers’ 11-hit attack.

The Tigers improved to 25-12 with the win, while Georgia fell to 20-18. Clemson wins the season series over the Bulldogs two games to none. Ryley Gilliam pitched five strong innings in earning the win.

The Tigers got to Georgia starter Andrew Gist early and often. Chase Pinder led off the inning with a single, but he was forced at second on a fielders’ choice by Eli White. Seth Beer walked on four pitches and Chris Okey laced an RBI single to left to score White for a 1-0 lead.

White drew a one-out walk in the second and promptly stole second. Beer lined a single to right – beating the Georgia shift – to score White for a 6-0 lead.

The Tigers continued to pile on in the fourth. Pinder singled with one out and stole second easily. White bounced to third, but the third baseman dropped the ball to put runners at first and second. Both runners then stole a base, and the Bulldogs elected to pitch around Beer and load the bases. Okey smoked the first pitch into the Chapman Grandstands for a no-doubt grand slam and a 10-0 lead. The home run was Okey’s seventh of the season, his third career grand slam and second this season.

Gilliam didn’t give up a hit until there were two out in the fifth – an inning kept alive by White’s two-out error. The next batter lined a ball of White’s glove and it was ruled a hit. Gilliam’s night finished with five innings pitched, and he gave up one hit, one walk and struck out one. He improves to 2-0 on the season with the win.

The Tigers continued the onslaught in the fifth, loading the bases with one out for Beer. Beer singled up the middle to score two more runs for a 12-0 lead.

The Tigers begin a three-game series against Georgia Tech Friday at 6:30 p.m. at Doug Kingsmore. Saturday’s game will be played at 6:30 and Sunday’s first pitch will be at 1 p.m.

Clemson vs. Georgia Photos >>
Clemson vs Georgia Boxscore
ONE DAY ONLY! Fanatics.com Black Friday Sale 20% off on orders over $75
Comment on this story