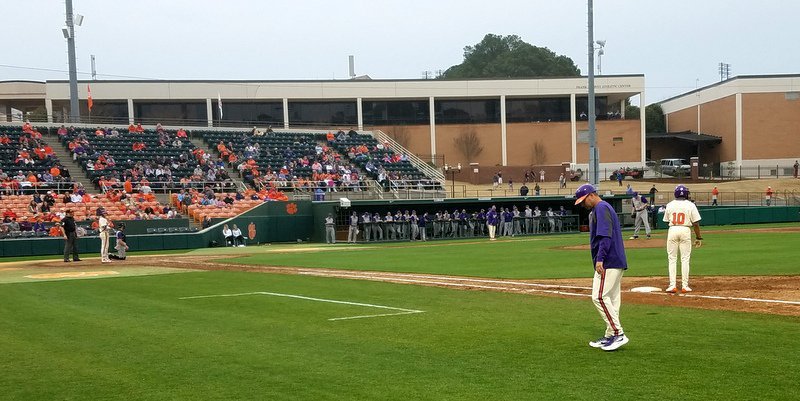 Jackson launched a three-run homer that capped a five-run seventh inning and No. 12 Clemson came back from a 5-1 deficit in beating Western Carolina 11-5 at Doug Kingsmore Stadium Wednesday evening.

Clemson had 15 hits in the victory, and Chase Pinder led the way with a 4-for-4 night in which he scored two runs and drove in four more. Grayson Byrd had two hits and knocked in three, while K.J. Bryant and Robert Jolly added two hits apiece.

Clemson improved to 2-2 on the season, while Western Carolina falls to 2-2. Ryley Gilliam entered the game in the eighth with a runner in scoring position and the Tigers leading by one and escaped the jam. He pitched a scoreless ninth and earned the save - the first of his career.

"It wasn't pretty, but one thing's for sure it was good to see our guys pick up some two-out hits with runners in scoring position," head coach Monte Lee said. "It kind of started - I gave Reed Rohlman credit in the third inning when we finally had a two-out single RBI to get us on the board. In the seventh inning, we had the bloop hit from Pinder, which gave Weston Jackson an opportunity to step up big and hit the three-run homer in the seventh inning.

"Then in the eighth inning, Pinder delivered another blow with a double, 2-RBI, and then Grayson Byrd with a two-out double that cleared the bases. I thought we had great production from the bottom of the order - Byrd, Jordan Greene gave us a couple of really good at-bats, Robert Jolly got his first career start behind the plate hit the ball really well and had two hits and scored three runs. I thought he caught exceptionally well. I'm very, very proud of Robert." 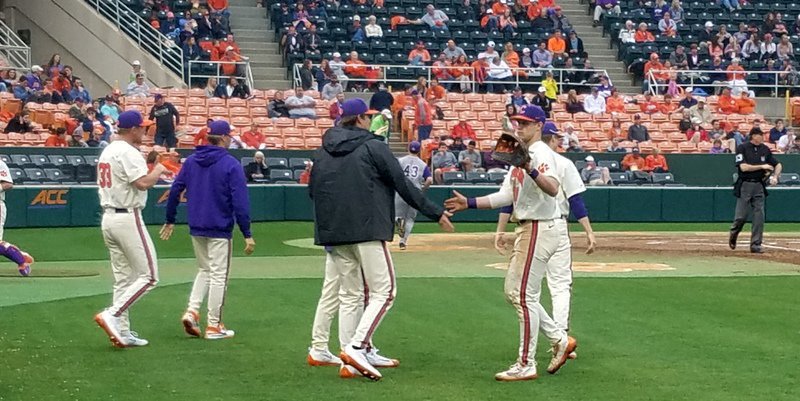 The Catamounts attacked Clemson starter Tyler Jackson early, doubling and singling in the game’s first three pitches. A sacrifice fly brought home the early run and Western led 1-0 at the end of an inning.

Western Carolina chased Jackson in the third. Brett Pope singled to right to open the frame, and moved to second on a walk by Bryson Bowman. A single from Matt Smith scored Pope, and Nobu Suzuki’s single scored Bowman for a 3-0 lead.

Jackson lasted 2 1/3 innings in his first start, giving up three earned runs while walking one and striking out two.

Robert Jolly doubled off the right-center field wall in the bottom of the inning and later scored Clemson’s first run on a sharp single to center by Reed Rohlman.

The Catamounts threatened to blow the game open in the seventh, and it was Pope and Bowman that once again were responsible for the damage. Pope singled to start the inning and Bowman doubled to left-center. A groundout and a single scored two more runs and Western had a 5-1 lead heading into the stretch.

The Tigers responded in a big way in the bottom of the frame. Pinch-hitter Jordan Greene led off the inning with a walk, Jolly singled to right-center and Bryant walked to load the bases. The threat was in jeopardy after Reed Rohlman and Seth Beer each struck out swinging, but Pinder hit a bloop single to center that scored two runs.

That brought up Jackson, who launched a 3-1 pitch into the leftfield grandstand for a 3-run homer and the 6-5 lead.

"We absolutely did. If you look at the first five innings, we had two guys on base for five consecutive innings and only scored one run. When you look at it, we're having good at-bats," Lee said. "We're putting together some pretty good at-bats without squaring a lot of balls up, but we've got to square the ball up, too. You're not just going to walk your way to six or seven runs in a ballgame. We've got to swing the bats."

The Tigers continued to score in the bottom of the eighth. Jolly walked to lead off the inning, Bryant beat out an infield single and both runners moved up a base on Rohlman’s bunt. The Catamounts walked Beer intentionally, and Pinder made them pay by lacing a two-run double down the right field line for an 8-5 lead.

Jackson was promptly drilled by a pitch to once again load the bases, but Davidson struck out for the second out (after narrowly missing a grand slam deep down the right field line). However, Byrd cleared the bases with a three-run double into right-center for an 11-5 lead.

Clemson returns to action Friday, hosting Elon in the first game of a three-game weekend series. First pitch is at 4 p.m.

Clemson vs WCU Boxscore
Get the latest Clemson gear right here!
Comment on this story