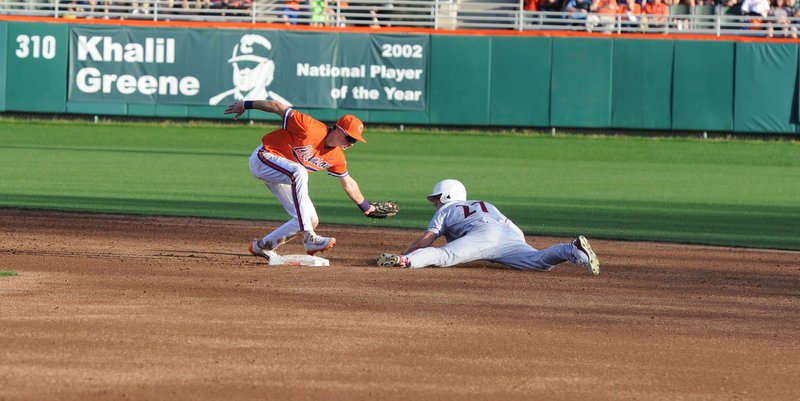 Barnes struck out a career-high 11

CLEMSON – A lot was on the line when Seth Beer stepped to the plate with the bases loaded and two out in the bottom of the 13th Friday night, and he delivered in a big way.

Beer’s single up the middle scored Robert Jolly with the game-winning run and Clemson escaped with a 1-0 victory over Elon in 13 innings at Doug Kingsmore Stadium.

Beer was 0-for-5 entering the at-bat, and his 64-game on base streak was in jeopardy, but he laced a 1-11 fastball past a diving infielder for the win. Clemson improves to 3-2 on the season, while Elon falls to 3-2.

Clemson pitchers Charlie Barnes, Ryley Gilliam and Brooks Crawford combined to strike out a school-record 23 batters. The previous high of 21 was set in 1923 and 1952. Crawford pitched the final inning for the win, improving to 2-0.

Barnes was outstanding in his second start of the season. He pitched 7 2/3 innings, throwing 111 pitches while giving up just six hits and walking none.

"What a crazy game. Extra innings on a Friday night. It sure was a Friday night pitching staff performance," head coach Monte Lee said. "That's about as good as it gets. 13 innings. We set a school record with 23 strikeouts tonight, but what's even more impressive is no walks. We did not walk a batter and struck out 23. Just really, really impressive. Barnes, Ryley Gilliam was really good again and Brooks Crawford. It was just an unbelievable job by our pitching staff. Offensively, we scuffled some. We had some opportunities, but we just couldn't a number of good quality at-bats together. I think guys are over-swinging a little bit, coming off the ball.

"We've got to stay within ourselves, use the whole field, shorten up. We only punched out four times, so we're just missing some pitches. We just couldn't find a way to center some balls early. You 've got to give Conroy - their starting pitcher a lot of credit. I thought he did an outstanding job. Kirby - the got at the end - was running it up there at 94, 95 mph. That's a really good arm. Elon has some really good arms and they definitely challenged us today. Our guys found a way to keep competing and brought a lot of energy tonight. I thought they competed extremely hard. You've got to win these kinds of games, so I'm very, very proud of our club." 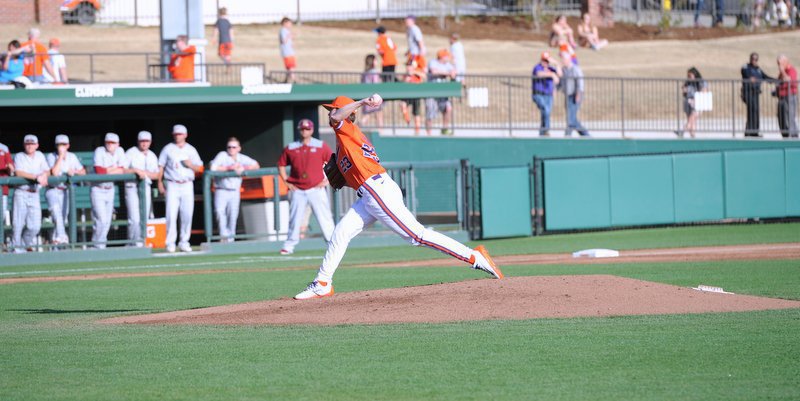 Barnes struck out a career-high 11 "

Barnes was at 99 pitches entering the eighth and got two quick outs, but an error by shortstop Logan Davidson ended his day. Gilliam came on to pitch and induced a liner to left to end the threat.

Clemson had a chance in the bottom of the eighth. Grayson Byrd laced a single to left to start the inning, and he moved to second on Patrick Cromwell’s sacrifice bunt. However, Robert Jolly and K.J. Bryant each hit weak grounders to end the threat.

Beer came up with one out in the ninth, and he stroked a 1-1 pitch from Conroy deep to right field, chasing the outfielder to the wall, but it was just a loud out, and his streak came to a very loud but disappointing end.

Pinder then laced a single to left, and Andrew Cox pinch-hit for Weston Jackson and singled to center with the outfield playing doubles depth. With runners at first and second with two out, Elon starter Ryan Conroy was lifted for lefty reliever Derek Pike, who came in to face Davidson.

Conroy’s line was as impressive as Barnes’ – he went 8 2/3 innings, nd 19striking out three and walking none while giving up just six hits. He threw 111 pitches and dropped h ERA to 1.46 after two starts.

Pike induced Davidson into a weak fly ball to left, and the teams headed to extra innings for the first time this season.

The Tigers had another chance to score in the 11th, and Beer had another chance to extend his streak. Reed Rohlman hit a single to right with one out, and Adam Renwick pinch-ran for Rohlman with Beer at the plate. On a 1-0 count to Beer, Renwick was caught stealing to erase the runner. Beer flied out to deep right and end the threat.

Gilliam blanked the Phoenix after replacing Barnes in the eighth but began to tire in the 12th. A strikeout and a wild pitch put a runner at first, and Kyle Jackson hit a one-out double off the wall to put runners at first and second. However, Gilliam struck out the next two batters to end the threat and send the game to the bottom of the 12th.

Gilliam pitched 4 1/3 innings, giving up just one hit and striking out nine. He is likely done for the rest of the weekend.

"It definitely hurts to lose Ryley, but we felt like once he got to that 40-pitch count mark that he was probably done for the weekend so we might as well ride him," Lee said. "I didn't really want him to go much more than what he went. That was as much as we could let him go. I think it was the right call. We definitely need two deep starts just because we're a little bit limited out of the bullpen without having Ryley in there. That gives other guys opportunities and they've got to step up and we've got to score some runs. We've got to help our pitching staff by scoring some runs early in the ballgame to take some pressure off of them because right now they're carrying us."

Byrd was once again a catalyst, leading off the bottom of the 13th with a single to center. Cromwell sacrificed him to second with a bunt down the third base line. That brought up Jolly, who bounced a single through the left side. Byrd advanced to third, and Jolly took second when the throw to the plate overshot the cutoff man.

Bryant was walked intentionally to load the bases, but pinch-hitter Jordan Greene bounced to the mound to force Byrd at the plate. That brought up Beer for the heroics.

Game two of the series is scheduled for 2 p.m. Saturday.

Clemson vs, Elon game one box
Get the latest Clemson gear right here!
Comment on this story