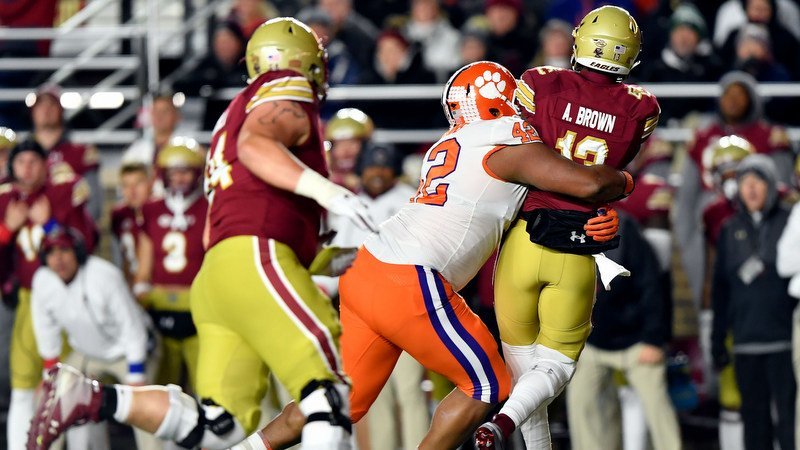 A cold Saturday night on The Heights in Chestnut Hill was a lot of fun for Clemson players and coaches, and head coach Dabo Swinney wants to make sure each of them enjoys the journey.

No. 2 Clemson defeated Boston College 27-7 Saturday night at Alumni Stadium in what turned out to be a dominating defensive effort. Boston College starting quarterback Anthony Brown was injured on the game's first series and wound up in the hospital with what head coach Steve Addazio termed internal injuries.

Swinney said he's reached out but doesn't have an update on Brown's status.

"I reached out to Steve today to check on his quarterback," Swinney said. "He said he was doing much better. I do plan on reaching out to their quarterback later tonight to check on him. It was a bang-bang play, unfortunately, but it wasn't anything that was out of line."

Swinney said the game was fun to watch.

“A fun tape to grade and watch, a tape that will make us better. A lot of good things on film,” Swinney said. “I'm just so proud of our team. Tremendous effort in preparation, a great job by our staff. We knew that was going to be a challenging game. We knew we had to beat a good team at their place and the way we did it speaks to the focus of our guys and the leadership that we have in place here. It's a great group of guys to come to work with every day. It was a special moment.”

In other words, enjoy the moment.

"I try to challenge our staff and our players to enjoy the journey. It's really special to achieve something like we did last night and to win our fourth straight division title,” Swinney said. “Our seniors really wanted to be able to do that. It was our seventh division title in 10 years. I know people, fans, get caught up in bigger things like playoffs and all that stuff. I still remember our first division win and I want to make sure that we enjoy that. It takes great commitment, dedication, and effort. I can't overstate that enough. We look forward to going back to Charlotte in a few weeks. This will be a special week with Senior Day and Military Appreciation Day.”

The Tigers were the better team from start to finish.

"The game itself, we were just dominant. We had a shutout on defense. We knew going in if they could establish a run game, that would create problems. We dominated third down,” Swinney said. “They were three of 16. But still, a lot to improve on. We had some busts. That was a challenging team to get ready for.

"Offensively, we were a few plays away - we had 424 yards of offense - of getting over 500 yards. We ended with 4.3 yards per rush. It was tough, but we did run and executed several big plays. Obviously, Milan Richard's touchdown was a big play. We did give up one sack. We had two straight weeks without a sack. There are things we need to improve on at every position. We answered on the punt return, which was good. The biggest play of the game for them was the punt return. Really, we need to do a better job of coaching our coverage. We had one player go behind their returner, for whatever reason. We were just kind of relaxed there, so we need to keep that sense of urgency. But we responded well.”

“Nothing to update tonight. Nothing different than last night."

“He played great. He was the player of the game. He was 29-of-41 in a very challenging situation. There was talk about him being a freshman and the weather and all that mess. He had some plays he'd like to have back and he missed a couple of throws, but he did very well. We didn't get the first down where he slid too early. We had a tip ball issue there. He needed to knock that down, but he's a true freshman. But he's making decisions, important decisions, checking in the run game and then he's just poised. He handles the good and bad plays with a very consistent demeanor. He's getting better and better. He was a difference in the game. I am proud of him."

Looking ahead to Duke and head coach David Cutcliffe

"First and foremost David is a great coach. He has built an excellent program. They know who they are and they are committed to that. They do a great job of evaluation. They're 7-3, they beat Northwestern and Northwestern just clinched the division in the Big 10. Their quarterback is definitely an NFL guy. Everything goes through the quarterback there. We're really just getting started studying their defense. We didn't get back until around 6 a.m. this morning. Duke has had a heck of a year, for sure. I'm looking forward to seeing David. He's one of my good friends in this business. I have all the respect in the world for him. It will be a tough battle with them Saturday night."