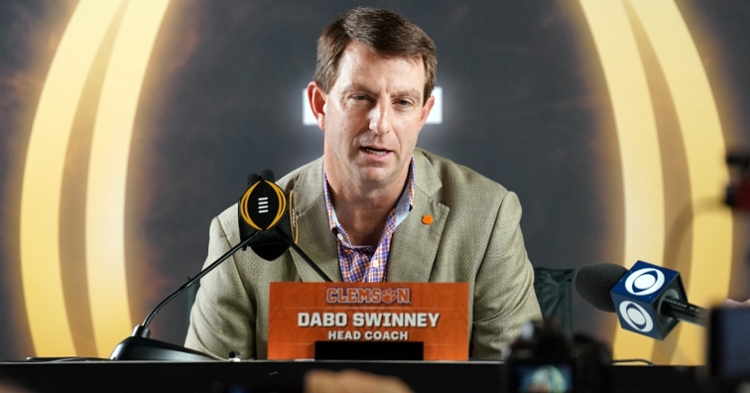 NEW ORLEANS, LA – Since Dabo Swinney took over at Clemson in 2009, every practice and every game has been a step in process toward making Clemson the premier program in the country.

The 2012 win over LSU in the Chick-fil-A Bowl was the next step in the process.

The first step in that process was winning the division in 2009.

“It was the next step. The first step was my first team in '09 winning the division,” Swinney said at the national championship media day. “You can't win – I always tell guys, you can't win five until you win four. You can't win four until you win three. You've got to take the steps. And I think so many people, so many programs, they try to take a shortcut. There's no elevator. You've got to take the steps. And that's a grind.

Swinney and Clemson faced the most adversity in 2010 when they finished with a losing record including a heartbreaking loss at Auburn and a loss to South Florida in the Meineke Car Care Bowl.

“The next step was learning how to handle adversity. 2010 we lost five games by six points or less, two of them in overtime, one of them to the National Champions at Auburn in overtime,” Swinney said. “We learned how to handle adversity. Our culture was taking root. 2011 was the next step because we needed to win an ACC Championship. We hadn't done it in 20 years. So, we won 10 games for the first time in 20 years. We won the ACC Championship. And then we got our butts kicked in the Orange Bowl. So, we come back in '12, and we win 11 games.”

When Clemson and LSU squared off on New Year’s Eve in 2012, the national narrative was that there was no way Swinney’s Tigers could hang with the Tigers from the SEC.

Proving they belonged was the next step that launched Clemson into winning its first BCS bowl game and a five-year run in the College Football Playoff.

“So, now consistency, back-to-back 10-plus win seasons, and now we get back to a big bowl, and we beat LSU and a team that was way better than us,” he said. “I mean, you can just – there ain't no doubt. That's probably the – that might be the best defense I've ever seen – that LSU defense of '12. But taking the next step of winning a game like that on a national stage and the belief – so the belief that came from that and what we were doing and then you come back in '13, back to the Orange Bowl, beat Ohio State, you win your first BCS bowl, and then the next year, we win 10 again, we beat South Carolina, we'd had a losing streak to South Carolina, beat South Carolina, beat Oklahoma, and then in '15 we're in the National Championship, got beat, '16 we're back, we win it. '17 we're right here in New Orleans, kind of fat and happy as the champions and we played like crap, and they punched us in the mouth, all right. And they were a better team.”

For Clemson, it’s always about the next step.

“And, then come back last year and win it again. It's just been a step along the way for us, he said.”