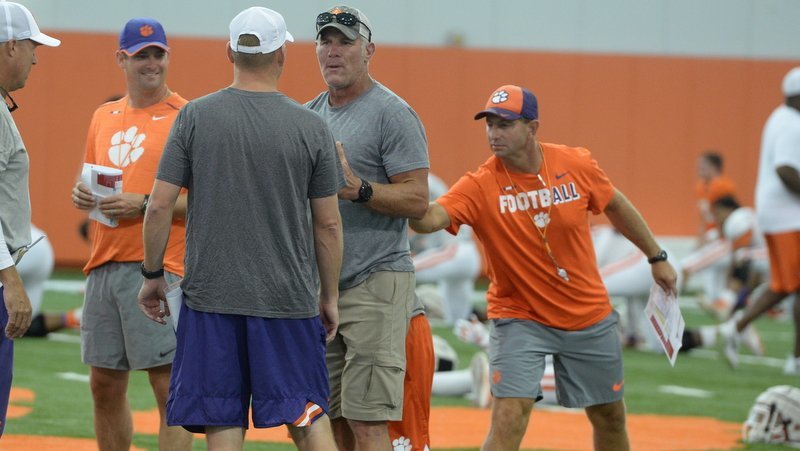 The assembled media was allowed to watch the first portion of practice and you could quickly tell where Favre – the former Green Bay quarterback – was on the field because that’s where all of the cameras were until the Paw Drill took center stage.

Before practice began, though, Kelly Bryant and Trayvon Mullen squared off in a game of corn hole to see if the offense or defense would get the closest practice field. Bryant emerged with a controversial 3-2 victory as head coach Dabo Swinney said there was a bag hanging on the lip of the hole that was worth two points breaking the tie.

The Paw Drill – Clemson’s version of the Oklahoma Drill – matched good on good for the first two periods of practice.

A couple of highlights from the Paw Drill…

*A neat moment occurred about halfway through the PAW drill. Running backs coach Tony Elliott picked out freshman running back Lyn-J Dixon. Dixon's first rush was a quick bounce to the outside. His change of direction is incredible. The next play, he caught a little seam in between two defenders and was through before they could get a hand on him. He sees the hole and he hits it, and all he needs is a little crease. It was further proof of what we've been hearing in the first part of camp. And, when it came time to run over somebody, he had no problems lowering his pads and hitting the pile. It impressed senior tight end Milan Richard, who came over to Dixon, patted him on the helmet and said, "You showed me a little something, there. You showed me something."

*Another freshman, Justin Mascoll quickly caught the attention of bystanders. He came around from the opposite side of a three-man line to make a tackle. 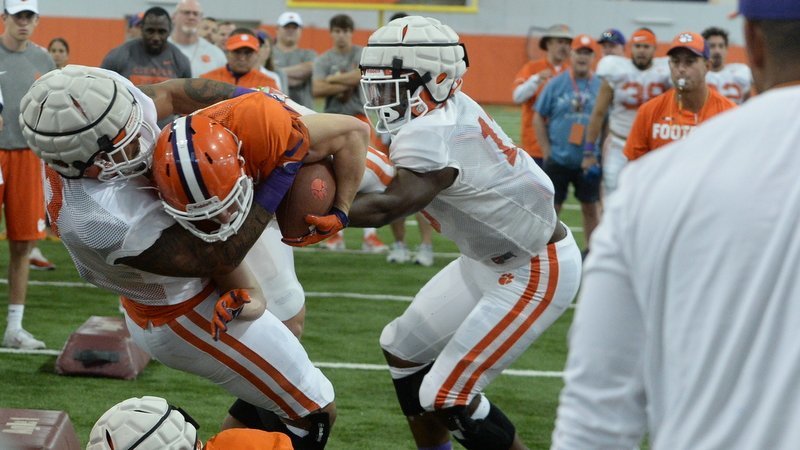 *Xavier Thomas had the play of the day, however. Reserve running back Ryan Mac Lain tried to follow a block to the outside and he ran right into Thomas. Thomas didn’t merely tackle, him, however. Thomas picked Mac Lain up off the ground, held him prone for a split second and then body slammed him. It not only drew screams and shouts from the rest of the players, but he got two arms up (like a touchdown signal) from a smiling Swinney.

Thomas is like a grown man out there, and the play drew a smile from Favre.

*The three elder tight ends – Garrett Williams, Milan Richard and Cannon Smith – got the best of the linebackers they were facing during their three downs. It was good to see that group physical at the point of contact.

*Running back Tavien Feaster, who has been limited after having meniscus surgery was full-go in drills and looked to have gained some of his explosiveness back.

*Freshman offensive lineman Jackson Carman held his own during his two cracks at the Paw Drill. Carman stonewalled Richard Yeargin on a few plays and then resumed his rivalry with Thomas – they met at The Opening last year.

*NFL scouts were back out in full force during Wednesday’s practice. The New York Jets and Baltimore Ravens both had scouts in attendance, while the Seattle Seahawks had a three-man contingent on hand.

*Former Clemson running back CJ Spiller watched practice, and he spent time in a 1-on-1 conversation with current running back Travis Etienne. It's always good to see the greats come back and interact with the current players.

*Injuries: OL Sean Pollard was in green. WR Tee Higgins, WR Will Brown, LB Jamie Skalski and DE Chris Register were all in yellow jerseys. Guys being banged up or limited at this time of year isn’t uncommon, especially after three days of intense practice.