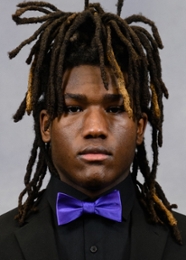 Cornerback
B I O
Missouri native who finished his prep career in Illinois and became one of the nation’s top corners
Before Clemson: National top-40 player according to 247Sports, which rated him No. 39 overall, sixth-best among cornerbacks and second-best in Missouri … On3 Sports ranked him as the nation’s No. 15 overall prospect, including listing him as the nation’s third-best cornerback and top prospect from Missouri … Rivals.com rated him as the nation’s No. 83 overall player, No. 10 cornerback and No. 3 player in the state … ranked No. 112 player in the nation by PrepStar, which also listed him as the No. 9 cornerback in the nation and third-best player in the state … ranked No. 156 overall by ESPN, including listing him as the 16th-best cornerback and fourth-best player in the state … selected to the All-American Bowl in San Antonio … native of St. Louis, Mo. but finished his prep career at East St. Louis High School in Illinois … helped his East St. Louis team to an 11-3 record in 2021 … had 84 tackles and three interceptions as a senior … had 82-yard interception return for a touchdown against Belleville West … played on 2019 state title team at Lutheran North High School in Missouri … played in just six games in 2020 due to the reduced schedule and had 22 tackles for his team that reached the state quarterfinals … had 13 receptions for 340 yards and five touchdowns and added 227 yards rushing and three scores … had 43 tackles in 2018 at St. John Vianney as a freshman … committed to Clemson on June 18, 2021 … enrolled at Clemson in January 2022 … coached by Carl Reed at Lutheran North in 2019 and 2020 before being coached by Darren Sunkett at East St. Louis in 2021.
Personal: Pre-business major … first name pronounced “tore-ee-AH-no” … born Dec. 18, 2003. Another great one joins the family?? — Clemson Football (@ClemsonFB)

Despite what ESPN might claim, when your "demise" results