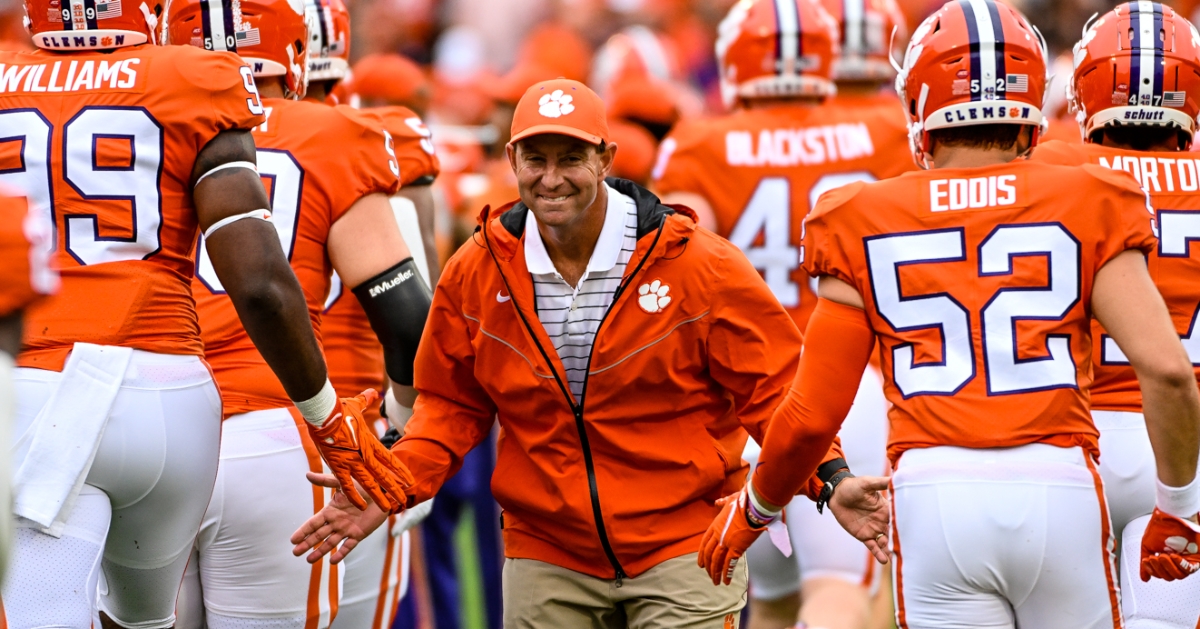 CLEMSON – The true freshmen on defense gained valuable experience, and the Tigers’ extensive injury list might not be as long this week.

Head coach Dabo Swinney held his Sunday evening teleconference with the media a few moments ago, and while there wasn’t really any breaking news, we have a few notes to pass along. We will start with the injuries – the Tigers were missing several starters on defense Saturday night, but Swinney is hopeful to have most of them back by the time the Tigers travel to Wake Forest for next Saturday’s noon contest against the Demon Deacons (ABC).

Swinney said he feels like the Tigers are in a good spot – he didn’t get into specifics – but said most of the guys are day to day. At one point during the win over Louisiana Tech, Clemson had four true freshmen (Toriano Pride, Jeadyn Lukus, Sherrod Covil, Wade Woodaz) on defense at the same time in a critical situation.

Looking back at the win over the Bulldogs, Swinney there is plenty of good and bad.

"Got a chance to review our game and just kind of what I saw during the game," Swinney said. "A lot of good things and a lot of things we've got to certainly improve to have a chance to get to 4-0. But I'm really proud of our guys, just how they competed. We're 3-0, and again, that's, that's where we hoped to be at this point, but gotta have a great week of practice and just continue to really coach hard and be coachable to correct a few more things.

"We got to really improve this week, have a great week of practice. A tough road game against a really veteran, experienced and very competitive... championship-caliber team in Wake Forest. They're the Atlantic Division champs. And they know what it looks like and they're confident in that so we'll have to correct some of these mistakes to have a chance to go and find a way to win this one."

*Defensively, they were much better in the screen game and on third down, but still giving up too many big plays (there were eight passes of 19 yards or more). Swinney said there are multiple issues at play, whether it’s communication, busts, eyes, leverage, technique, etc.

*There were no sacks on the offensive line and he’s happy to see the tight ends and receivers beginning to emerge. Credited quarterback DJ Uiagalelei’s rushing with opening up the offense.

He then gave credit to right tackle Blake Miller for getting better each week.

"He had another winning grade, another winning performance. Just keep building with him,” Swinney said. “When you're talented and have the work ethic and conscientious that he has, you're going to do what you need to improve. It's been good to see."

He said running back Will Shipley reminds him of another Tiger great.

"He's like Grady Jarrett playing tailback," Swinney said. "His motor never stops." Swinney said that even during summer conditioning, Shipley has to win every sprint, the first and last one, and is a competitor in everything he does.

He echoed offensive coordinator Brandon Streeter’s comments that they are still trying to figure out the offense – what works, what doesn’t work, what plays work best for which players, etc.

*Freshman wide receiver Adam Randall was in for 18 snaps Saturday, but he won’t be on a pitch count Saturday at Wake. He said Randall has been fully released.

*Defensive tackle Ruke Orhorhoro graded 91 percent. Safety RJ Mickens also graded out at 91% and was one of the defensive players of the game.

*He said backup quarterback Cade Klubnik is in a good spot and “will be ready if we need him.”

*Swinney said Mitchell Mayes and Bryn Tucker are offensive linemen six and seven after the starting group, with freshman Collin Sadler right there with them.