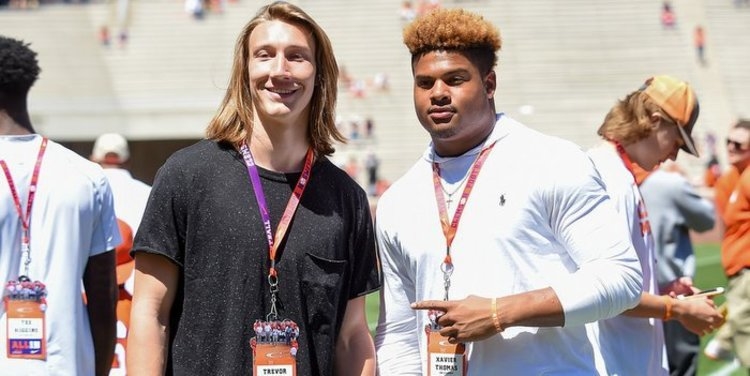 •Clemson’s 17-member scholarship class included players from eight states. Six of the players were ranked as the best in their respective state by either ESPN.com or Rivals.com. Clemson signed the number-one player according to at least one service from North Carolina, South Carolina, Florida, Ohio, Alabama and Georgia.

•Twelve of the 17 scholarship players in the class are ranked in the ESPN Top 300, including 10 in the top 150. It is tied for the most top 150 players according to ESPN in Clemson history and the most since 2008 when Clemson had 10 top 150 ESPN ranked players in Tommy Bowden’s final recruiting class.

•Clemson ranked fifth in the final ESPN rankings, sixth by 247 Sports and eighth by Rivals.com.

•Clemson is the first school since 2007 and just the second in the 13 years ESPN has had rankings, to sign three of the top six ESPN prospects. Southern Cal signed the top three in 2007. Trevor Lawrence ranked No. 2, Xavier Thomas #4 and K.J. Henry #6 this year.

•Mario Goodrich is the first Clemson signee in history from the state Missouri.

•Over the last two years Clemson has signed just 31 players, but 21 of them have been top 300 players by ESPN.com.

•In terms of top 150 signees from ESPN, Clemson had 10 this year to rank in a tie for fourth in the nation with Alabama. Clemson now has had 54 top 150 signees since 2010, or Dabo Swinney’s first full recruiting class.

•Clemson had four USA Today first or second-team All-Americans in this class. Xavier Thomas, Trevor Lawrence and Jackson Carman were first-team selections, while K.J. Henry was a second-team choice. Lawrence was named the USA Today Offensive Player of the Year. This ties for the most USA Today All-Americans in one class in Clemson history. Clemson also had four who made first or second team in 2011 and 2016.

•This decade Clemson has signed 72 players from South Carolina, 38 from Georgia, 26 from North Carolina and 20 from Florida.

•In his career as Clemson head coach dating to the 2009 recruiting class, Dabo Swinney has signed 207 players from 21 different states.