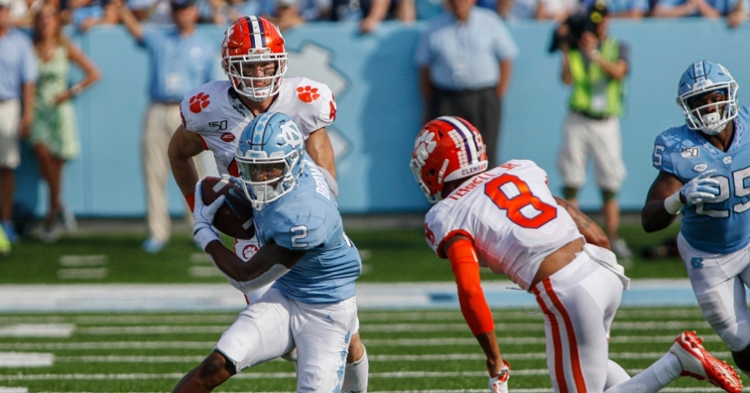 The game was a matchup of two of the five active head coaches with FBS national championships to their credit. With the victory, Head Coach Dabo Swinney now has at least one career win against every active national championship head coach (Mack Brown, Jimbo Fisher, Les Miles and Nick Saban), including wins against Brown, Fisher and Saban in Clemson’s last six games.

The game was Clemson’s first one-point victory since the 2012 Chick-fil-A Bowl, a 25-24 victory against LSU.

Quarterback Trevor Lawrence completed 18-of-30 passes for 206 yards with one touchdown and no interceptions. He also recorded career highs in rush attempts (11), rushing yards (45) and recorded a three-yard touchdown run.

On his ninth completion of the game, a 28-yard pass to Tee Higgins, Lawrence passed Rodney Williams (333) for eighth on Clemson's all-time pass completions leaderboard.

Clemson scored its first points of the game on a 13-yard touchdown run by running back Travis Etienne.

On that run, Etienne (264) passed kicker Chris Gardocki (261 from 1988-90) for ninth on Clemson's all-time scoring list. Etienne already ranks fourth on the list among non-kickers.

The rushing touchdown was also the 42nd of Etienne’s career, pushing him past Travis Zachery (41 from 1999-2001) for sole possession of the second-most career rushing touchdowns in school history.

The 100-yard receiving game was Higgins’ second of the season and sixth of his career.

Higgins gave Clemson its first lead of the game on a 38-yard pass from Lawrence with 9:54 remaining in the game.

The touchdown reception was Higgins’ 17th of his career, tying Perry Tuttle (17 from 1978-81) for ninth on the school's all-time leaderboard for career receiving touchdowns.

On the touchdown pass to Higgins, Lawrence tied Nealon Greene (43) for 10th on Clemson's all-time leaderboard for total touchdown responsibility.

Higgins’ 129 receiving yards are tied for the fourth-most by a Clemson player against North Carolina all-time, matching Phil Rogers’ 129 yards against the Tar Heels on Nov. 6, 1965.

Defensive tackle Jordan Williams recorded his first sack of the season, dropping North Carolina quarterback Sam Howell for a seven-yard loss in the second quarter. It was his first sack since Oct. 27, 2018, at Florida State.

The multi-sack game was Clemson’s nation-leading 18th since the start of the 2018 season.

The game snapped Clemson’s 14-game streak of winning by 14 points or more. The streak ends tied with the 2012-13 Florida State Seminoles and 1955-56 Oklahoma Sooners as the third-longest such streak in the AP Poll era (since 1936).

Clemson was held without a takeaway for the first time since Nov. 17, 2018. It also snapped a streak of eight consecutive games with an interception, tied for Clemson’s fourth-longest streak since 2000.

Clemson allowed first-quarter points for the first time this season on an opening drive touchdown by North Carolina. Clemson entered the game with a 45-0 advantage in the first quarter this season.

The game was tied, 14-14, at halftime. It had been 45 games since Clemson was tied at the half, dating to the College Football Playoff National Championship Game that concluded the 2015 season when Clemson and Alabama were tied, 14-14, after two quarters. Clemson is now 6-2 under Head Coach Dabo Swinney when entering halftime tied.

Clemson entered the game 38-1 since 2015 when outscoring teams in the “middle eight,” defined as the final four minutes of the first half and the opening four minutes of the second half, and outscored North Carolina, 7-0, in that window in this contest. Clemson now has a 28-10 edge in “middle eight” points in 2019 after producing a 132-10 edge in that category in 2018.

Clemson has now rushed for multiple touchdowns in six consecutive games for the first time since a nine-game streak to open the 2018 season.

The game was Clemson’s first in Chapel Hill since 2010 and only its second since Head Coach Dabo Swinney's arrival in Clemson as an assistant in 2003.

Official kickoff temperature was 91 degrees, representing the third-hottest road game in Clemson history, trailing a 2004 contest at Texas A&M (95°) and a 2010 game at Auburn (93°).

Clemson improved to 13-2 all-time in games as the AP No. 1-ranked team. Fourteen of Clemson's 15 games played at No. 1 all-time entering Saturday have come during the Dabo Swinney era.

Clemson pushed its streak of consecutive victories in ACC interdivisional matchups to nine games, dating back to the 2016 ACC Championship Game.

Clemson improved to 27-8 against ACC Coastal Division opponents, including postseason play, under Head Coach Dabo Swinney. Clemson has now won 13 of its last 14 games against the Coastal Division since 2015.

Clemson pushed its all-time record against North Carolina to 38-19-1.

Clemson earned its first win in Chapel Hill since Tommy Bowden's Tigers earned a 42-12 road win against the Tar Heels on Nov. 9, 2002.

Clemson won its ninth straight true road game. Clemson is in the midst of its second road winning streak of nine games or more all-time, including the school-record 12-game streak from 2015-17.

Clemson collected its 34th victory in its last 37 games away from home.

Clemson won a 14th consecutive ACC regular season game for the third time in school history (20 from 1981-84, 14 from 2015-16). It was Clemson's 16th straight victory against ACC opponents, including postseason play.

Clemson won its 22nd consecutive game in the month of September, dating back to 2014. The current streak is already the longest in school history.

Clemson has now won 37 of its last 39 games against ACC teams.

Clemson has now won 21 of its last 22 games away from home against ACC teams.

Clemson has now won 34 of its last 37 games away from home.

Clemson has now won 66 of its last 68 games against unranked teams.

Clemson has won 73 straight games when holding teams under 23 points (dates to 2010).