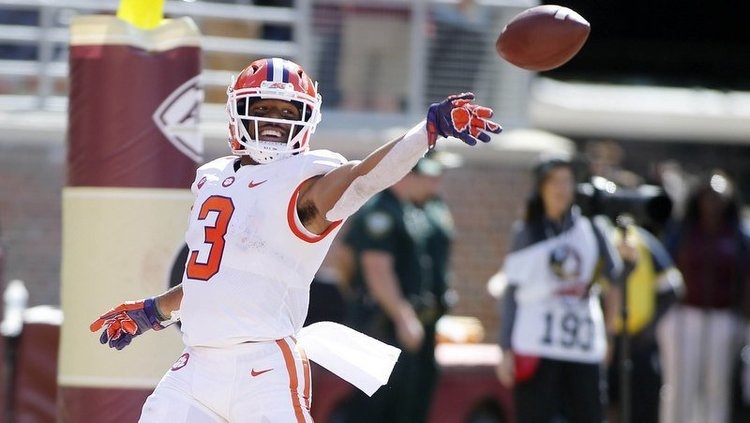 Amari Rodgers is leading the ACC in rating when targeted and bests the team in catch rate. (USA TODAY Sports-Glenn Bell)

If ever there’s a week where the mantra of “It’s about Clemson and not an opponent” is true: it’s this one.

Because the opponent in Louisville is not good and Clemson is arguably playing like the best team in the country.

Dabo Swinney’s Tigers are hovering around a 40-point favorite for the noon kickoff with Louisville. Statistically, the Cardinals’ only saving grace is a top-25 special teams unit around offensive and defensive efficiencies in the triple digits nationally on average. Only three Power 5 teams are rated worse than Louisville in ESPN's Football Power Index (93rd) and they are by far the worst FBS team on the Tigers' schedule (Georgia Southern next at No. 73).

The Cardinals defense has rated in the single-digits in efficiency in three games this season - one versus Alabama (8 percent) but another most recently versus Wake Forest at home (6 percent; the Demon Deacons scored three points on Clemson and rank 59th in offensive efficiency).

With Clemson rated in the top-15 in offensive and defensive efficiency on ESPN and Football Outsiders, the projected scores follow the Vegas line.

One Football Outsiders metric with the FEI picks Clemson 56-0 and another with the S&P+ takes the Tigers, 45-11. ESPN-affiliated metrics with TeamRankings (51-10) and numberFire (52-10) are on the same track with big spreads.

Check out the team profiles and some more notes on the Tigers below:

Advanced stats of note through eight games for the Tigers:

* Amari Rodgers and Tee Higgins showing out in Tallahassee was just an indication of the kind of season the two are having. Pro Football Focus has Rodgers leading the ACC (140) and Tee Higgins third-best (130.9) in highest passer rating when targeted. They accomplish that in different ways. Rodgers has posted a team-high 83.3 catch rate with 30 receptions in 36 targets and three touchdowns. Higgins has logged a team-high 52 targets with 32 catches for 488 yards and a team-best six touchdowns.

These ACC WRs see the highest passer rating when targeted through 9 weeks pic.twitter.com/7wjDJAtZYJ

** Percentage of carries where an O-line executes and produces at least five yards of rushing for the ballcarrier.

^ Percentage of plays where a defense tallied a tackle for loss, forced a fumble or defensed a pass.)