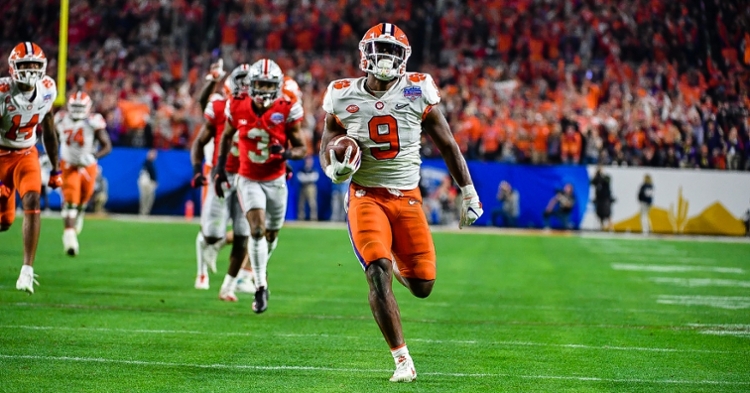 Clemson has been an almost-unanimous preseason No. 1 up to this point across the media landscape.

247Sports has the Ohio State Buckeyes on top to start the season, however.

"Heisman Trophy finalist Justin Fields is back for his junior season, and he’ll throw to a wide receiver room that projects to be among the best in the country," 247Sports' Chris Hummer writes. "Chris Olave and Garrett Wilson are known commodities, and incoming five-star freshmen Julian Fleming and Jaxon Smith-Njigba won’t take long to become so. The offensive line is led by three returning starters, left tackle Thayer Munford, center Josh Myers and right guard Wyatt Davis, all of whom are All-American candidates...Defense is where questions arise as top five picks Chase Young and Jeff Okudah exit along with five additional starters off the nation’s No. 1 overall unit. Don’t forget the group’s main architect, Jeff Hafley, is now Boston College’s head coach.

"Still, Ohio State does not lack for potential standouts. Cornerback Shaun Wade returns to anchor the secondary as the Buckeyes’ next likely first-round DB, and rising sophomore Zach Harrison projects as the team’s next star edge rusher."

Clemson is up next in the No. 2 spot.

"The Tigers have reached the playoffs for five straight seasons," Hummer writes, "and they have a playoff-worthy roster once again. It starts with the best quarterback prospect of a generation, Trevor Lawrence, and flows all the way to the Tigers’ incoming No. 3 overall recruiting class. Are there things not to like? Of course. Clemson is losing four offensive line starters and one of the most impactful defenders in the country (Isaiah Simmons). A recent season-ending surgery to star receiver Justyn Ross doesn’t help either.

"But the Tigers will be far better along the defensive line: Tyler Davis, Xavier Thomas, Bryan Bresee and several other elite talents is a scary combination. That depth should allow defensive coordinator Brent Venables to switch back to his preferred four-down look up front after altering the scheme a season ago."

November scheduled-opponent Notre Dame is No. 8. North Carolina is another ACC rep at No. 19 and Virginia Tech is there as well at No. 24.