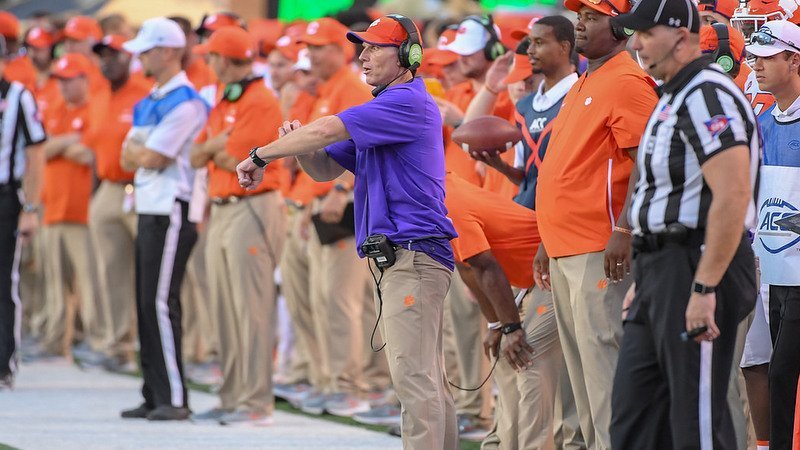 Venables says he has it all at Clemson

None of that means Venables is ready to pack up and head to Lubbock.

A report surfaced Monday morning from the Austin American-Statesman stating that Hocutt has spoken with Venables, his former college teammate at Kansas St., about the opening.

“Kirby and I were college teammates, fellow linebackers, and are very good friends. I talked to Kirby a lot, and I’ve talked to him recently but that’s all I'll say,” Venables said. “But I have a great job and great loyalty for the people responsible for me being here.”

Kingsbury had a 35-40 record over six years at Texas Tech, closing this season with a 35-24 loss to Baylor on Saturday that kept the Red Raiders from reaching bowl eligibility. Kingsbury had two years left on his contract with a $4.2 million buyout.

After upping Venables’ salary to $2 million a year in February, the school extended the deal to five seasons through 2022 and added retention bonuses that make the package worth $11.6 million. However, Venables has more than just monetary reasons to stay in Clemson – his son Jake is a redshirt freshman linebacker on the team.

“My son Jake is here, and he’s chasing a dream, and I sold this dream to him,” Venables said. “My responsibility as a dad is to support for as long as he wants to chase it. I will never complicate the integrity of my job by looking for other opportunities, ever. Who am I to be a hypocrite regardless of what opportunities are out there? That's how I look at it."

Venables went on to say that he has it all at Clemson.

“I’ve never tried to leverage one situation for another. Ever. I would never try to prostitute myself. If I’m worthy of something then let the powers that be decide,” he said. “You want to be valued. You want to be appreciated. To me, I get more out of that than anything, and to me, I have it all here at Clemson,” Venables said. “The success of our players, our team, our offense, coach Swinney, the leadership, the byproduct of that is success for all of us.

“And so that’s part of the profession that we live in. Managing it is pretty simple to me. You do have representation that handles a lot of stuff, and you give them guidance about how to handle certain things. But I’ve always had a ‘be here now mentality’ and never tried to have multiple hats in the ring.”