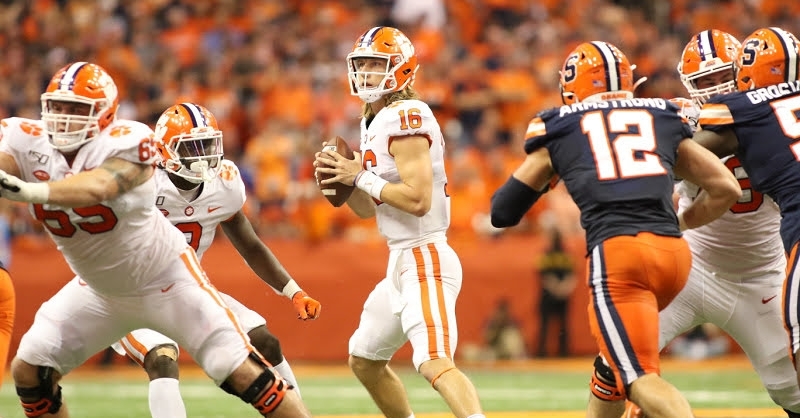 Lawrence looks for a passing lane against Syracuse. (Photo by Susan Lloyd)

CLEMSON – Trevor Lawrence isn’t worried about the outside noise.

Clemson’s star sophomore quarterback has put together a start that has many wondering if he is in a sophomore slump – he’s thrown five touchdown passes but also has five interceptions and he’s completing just 61 percent of his passes.

Many people compare Lawrence’s stats to last season when he took the college football world by storm and wonder if something is off with the Tigers’ signal caller.

“I think I’m the same guy I was. There have definitely been some bad decisions that I have made in games, and that’s going to happen when playing quarterback,” Lawrence said. “We run a spread offense, so we throw the ball a lot. There is going to be some bad decisions and some throws that aren’t great throws. That’s just part of the game. I’m trying to get better every week. I’m trying to help my team win in any way that I can.”

He doesn’t let outside factors affect his preparation or his performance.

“No matter what you do, everyone is going to talk about the bad. That’s fine, and that’s just how it is,” he said. “You kind of get used to it after a while. We try to keep everything internal. We know what this team is capable of. We know who we are. We try and stay locked into that and not listen to the outside noise. That’s just how it is.”

Co-offensive coordinator Jeff Scott agrees that the team can’t worry about the outside noise.

Lawrence threw for 395 yards and three touchdowns last Saturday in the Carrier Dome, including an 87-yard touchdown pass to Amari Rodgers.

“It was cool. It was a lot louder than I expected. It just echoes, but it was really fun,” Lawrence said. “It’s hot in there. I’m sure all of you that were there can tell that. It was awesome, and a cool experience. They’ve got great fans It was cool to be a part of something like that.

“It (Rodgers’ performance) was awesome. We all knew it was coming because of how hard he has worked to get back. We’ve seen him in practice. He looks better than he was before. He’s faster, and he looks great. It was really cool to see that pay off and see him reap those benefits.”

Heading into this week’s game against Charlotte, Lawrence isn’t looking to improve his stats – he’s just looking for the offense to improve as a whole.