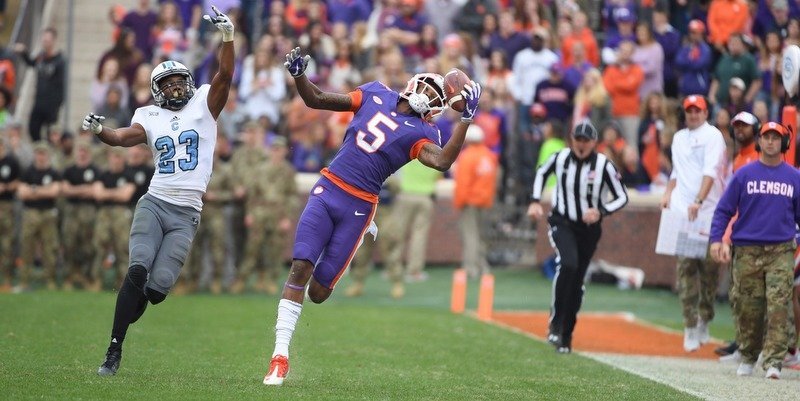 No. 2 Clemson celebrated Military Appreciation Day with a workmanlike 61-3 victory over The Citadel in Death Valley. A ton of players saw action, there were no significant injuries, and the Clemson faithful got a heavy dose of America as Lee Greenwood sang “God Bless the USA” during a halftime ceremony.

Clemson improves to 10-1 with the victory and will face arch-rival South Carolina in Columbia next week. The Citadel ends its season with a 5-6 record.

“Congratulations to the seniors. Senior Day is always an emotional game," head coach Dabo Swinney said. "Today, we showed some maturity as a team…to get control of the game and get other guys some opportunities and hold The Citadel to three points was awesome.

“We played so many guys. We also had three quarterbacks throw for over 100 yards, and I don’t know if that’s ever happened before. It was great to see Deon Cain get back on track. How about Tee Higgins? What a performance he had. Also, Travis Etienne broke C.J. Spiller’s freshman touchdown record. James Skalski got first start and played well. Again, so many guys made critical plays at critical times. This was just a fun day to see these guys have a great time playing well and seeing other guy play well and get excited about that, too.”

Swinney said no one does Military Appreciation Day better than Clemson.

“It’s been awesome all day. The job that Clemson does on Military Appreciation Day is amazing," he said. "There were so many spectators on hand today, and we wanted to put on a special show for them. I’m glad that everybody got to take part and enjoy themselves for three hours on a such a meaningful day.”

The Bulldog rushing attack earned two quick first downs, and facing a 4th-and-3 at the Clemson 42, head coach Brent Thompson gambled and went for the first down. Clemson’s defense stiffened and Tigers stopped the Bulldogs a yard short of the conversion.

Five plays later, the Tigers faced a 3rd-and-20 at their own 47 when Kelly Bryant found Deon Cain down the right sideline. Cain gathered in the throw at about the six and carried a defender into the end zone to complete a 53-yard touchdown throw for a 7-0 Clemson lead midway through the first quarter.

Three plays later, Trayvon Mullen ended the next Bulldog drive with an interception at The Citadel 49. Etienne had rushes of eight yards and 20 yards before ending the drive with a six-yard run up the middle. With 5:38 to play in the quarter, Clemson led 14-0.

The touchdown was the 10th rushing score of the year for Etienne, tying C.J. Spiller’s freshman record that he set in 2006.

The Clemson defense forced another Bulldog punt, and after a punt, it took the Tigers eight plays to cover 69 yards. The drive ended with a 12-yard scoring toss from Bryant to Hunter Renfrow. The touchdown, Renfrow’s first of the season, gave Clemson a 21-0 lead late in the first quarter.

Another short Bulldog punt turned into another touchdown drive for the Tigers. Bryant led Clemson down the field, covering 57 yards in just seven plays. The final play was a 13-yard skinny post touchdown pass to T.J. Chase for the first score of Chase’s career, and the Tigers led 28-0 with 11:59 to play in the second quarter.

On their next possession, the Tigers added a 26-yard field goal by Alex Spence to go up 31-0 and Bryant’s day was done. Bryant ended his day completing 17-of-22 passes for 230 yards and three scores.

Zerrick Cooper replaced Bryant and the Tigers had a three-and-out, but stopped The Citadel and forced a punt with a little over a minute to play in the half. Cooper completed a 39-yard pass to Tee Higgins early in the drive, and the two hooked up again a few plays later. Cooper lofted a pass into the end zone that bounced off of Higgins and off the shoulder pads of a Bulldog safety. Higgins then dove and caught the deflection for a 32-yard touchdown reception with just five seconds left in the half. Clemson led 38-0 at intermission.

Clemson needed just one play to score in the third quarter. Tavien Feaster took the handoff from Hunter Johnson, broke a tackle in the middle of the line and then broke another tackle near midfield on his way to a 61-yard touchdown run. Clemson led 45-0 just a few seconds into the third quarter.

The Tigers continued to pour it on. Johnson hit Cain on a gorgeous 41-yarder down the right sideline, setting up a seven-yard scoring run by Etienne. Etienne’s score broke the Spiller record he tied earlier in the game, and the Tigers led 52-0 with 9:11 to play in the third quarter.

Higgins made another acrobatic catch on the Tigers’ next drive. Johnson lofted a pass down the left sideline and Higgins caught the ball with one hand and walked the tightrope down the sideline to complete a 78-yard pitch and catch. The extra point attempt failed and Clemson led 58-0 with just under four minutes to play in the quarter.

Left-footed kicker Christian Groomes added to the score with a 38-yard field goal, making it 61-0 with 6:09 to play. The Citadel added a late field goal that made it 61-3.

The Tigers and Gamecocks are scheduled for a 7:30 kickoff on ESPN. The Tigers won their third in a row in the series with a 56-7 victory in Death Valley last season.