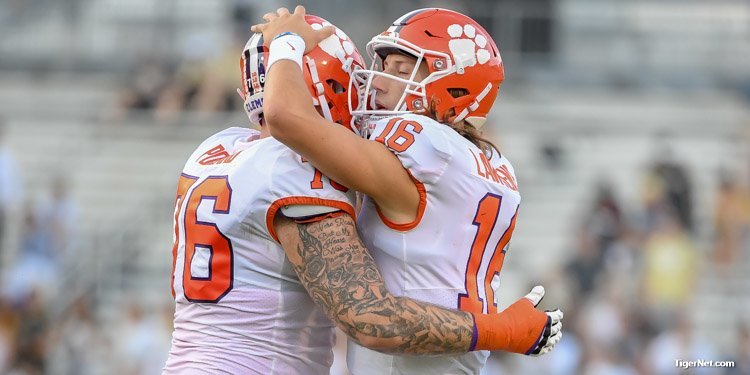 Hurricane Michael roared through the Upstate of South Carolina late Wednesday and early Thursday, symbolically ending the heated first half of the college football season and ushering in a cooler, and hopefully less dramatic, second half.

The Tigers are off this week but will face an undefeated NC State team in Death Valley to open the second half of the season. With the first half – and all of the drama – in the rear view mirror, here are five of the top moments from a tumultuous and undefeated first half.

5. Clemson blows out Wake to end first half

The Tigers entered last weekend with many doubting whether this team was good enough to make another run to the College Football Playoff. Needing to not only win but win in convincing fashion, the Tigers turned in a 63-3 victory that gives the team momentum heading into the second half of the season.

Three Tigers rushed for at least 125 yards apiece, and the team rolled up 471 yards rushing in the rout.

It was the first time in school history that Clemson had three players with at least that many yards apiece, and the first time since 2006 that they three in triple figures. The team rushing total was the program's best since 1981 and the fourth-best in its history.

Bryant, who led Clemson to the College Football Playoff last season, started each of the first four games this season, but Lawrence, the No. 2 overall recruit in the nation was superb coming off the bench, including completing 13 of 18 passes for 176 yards and four touchdowns against Georgia Tech,

"After four games, just looking at it, they've both played well, but this came down to you have to reward productivity. He's taken advantage of [opportunities]," co-offensive coordinator Tony Elliott said. "Kelly didn't do anything wrong, but it's a situation where he's been in the game and productive, and to be fair to competition, just like we do for every position, Coach decided to name him the starter."

Bryant missed the next few practices after the Lawrence announcement and then made the decision to transfer. Thanks to the new NCAA redshirt rule, Bryant can take this season as a redshirt year and have one year of eligibility remaining.

Bryant went 16-2 as a starter at Clemson, taking the Tigers to the College Football Playoff a year ago. He is set to visit North Carolina.

Clemson doesn’t win at Texas A&M with the heroics of Wallace.

With the Aggies trailing the Tigers by eight points, A&M quarterback Kellen Mond completed a pass to Quartney Davis. Wallace chased downDavis on what looked like a 23-yard touchdown, punching the ball through the back of the end zone for a touchback.

The play was reviewed and stood as call, thwarting the Aggies’ scoring opportunity.

A&M got the ball back and Wallace came close to intercepting quarterback Mond's pass to wide receiver Kendrick Rodgers. Instead, the ball clanged off the Tigers' safety and nestled into Rodgers' hands for a touchdown. In one play, Wallace went from essentially sealing his team's win to gifting the Aggies an opportunity to tie the game with a two-point conversion.

1. The 94-yard drive to beat Syracuse

Clemson escaped upset-minded Syracuse with a depleted secondary, a backup quarterback, a shuffled offensive line, and a gutsy 13-play drive that covered 94 yards for the game’s final score.

Lawrence went down with an injury in the first half and didn’t return, leaving the game in the hands of Chase Brice, who started the week as the third-string quarterback. With Clemson trailing 23-20, a booming punt pinned the Tigers at their own six-yard line.

The 94 yards didn’t faze Brice, Tavien Feaster, or Travis Etienne. Etienne had five carries and Feaster six on the drive, but Brice came up with two plays that made the difference. Facing a 4th-and-1 just over midfield, the Tigers went for it and were called for a false start. Now a passing situation, Brice hit Higgins for 20 yards and a first down at the Syracuse 32. Brice followed with a 17-yard run to the Syracuse 15, and Etienne finished the drive with a two-yard run that made it 27-23 with 41 seconds to play.