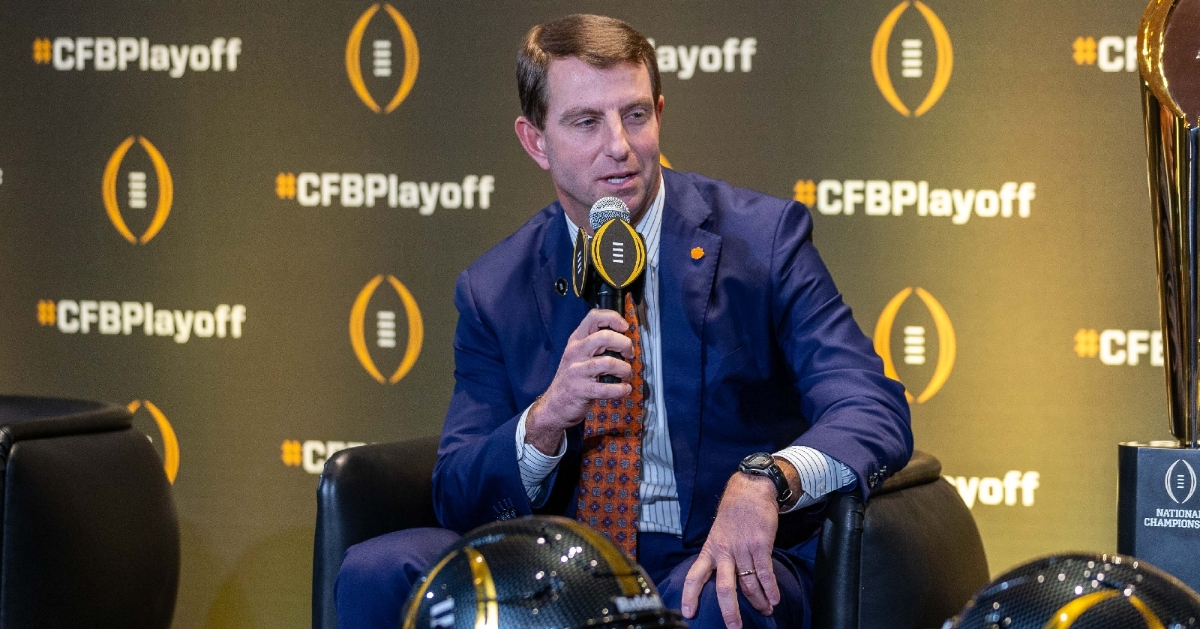 ATLANTA, GA – Dabo Swinney’s coaching tree is starting out like a twig with the hiring of Jeff Scott at South Florida.

Scott, Clemson’s former co-offensive coordinator, and wide receivers coach was named the fifth head coach in South Florida history Monday. Swinney said that he knew as early as last week that Scott was the front-runner to become the top Bull.

“Yeah, we knew. Well, take that back. We weren't 100% until Sunday that he had the job. I had kind of a wink-wink, nod-nod from Michael Kelly (the USF Athletic Director)," Swinney said. "I've known Michael Kelly for a long time. He was our ACC football operations guy. Then he was the CFP guy for the first few years there.

Swinney said losing Scott is like losing a son but now he has a start to his coaching tree.

“He's been with me 12 years. It's like sending a son off to college, kind of sad, but you know he's very well-prepared,” Swinney said. “I'm just happy. I'm happy for South Florida, happy for Jeff, how it all came together. Hopefully, there will be some other guys that will get an opportunity through Jeff's opportunity, as well. I don't really have a big coaching tree, but I got like a twig now and a leaf growing. He'll do awesome. He's so well-prepared. Got off to a good start yesterday.”

Scott will coach the Tigers during the College Football Playoff.

“It was just one of the questions when I met with him last week, If this happens, let's talk about a timeline on how we would like this thing to go and work, and what's best for you,” Swinney said of the plan. “I'm kind of excited that he's going to be gone for a little while, I can take them wideouts back. That's my passion. My man Grisham, Tyler Grisham, is so well-prepared. He was a great player for me. Played four years in the pros. He's been back with me for six years. He was a GA for three years, then a player development guy for three years.

“He's been very patient, well prepared for this opportunity. He and I will handle the wideouts until we break, then once we get back from our break, Jeff will be back with us full-time to finish out. He'll be down there through next Wednesday. Again, when we reconvene to fly out to Arizona, he'll be all Clemson all the way until we finish. I'm excited about that. Same thing for Brad.”

Swinney said the loss of Scott will be felt within the Clemson program.

“Jeff is a huge loss for us. As I said, he's been with me for 12 years. He was a GA for me. When I got the interim job, I brought him in there with me, kind of trained him up, if you will,” Swinney said. “He's just done a phenomenal job in everything that you ever asked him to do. One of the main reasons I hired him is prior to becoming the head coach, Coach Bowden, I ran the camps, I ran the clinics, there were a lot of things I did for Coach Bowden. When you're in charge of those things, you're always trying to get the GAs, student workers to help you out. Sometimes full-time coaches aren't quite as antsy to put the trash bags out where they need to be or whatever needs to be done.

“But Jeff Scott, whatever you asked him to do, he would so far exceed what your expectation was. I told him that. I told him, If I ever get a job, you're going to be the first guy I hire. He was always early, always late, no job was too small for him. I was always so impressed with him. Literally the day I became an interim, I said, All right, here we go. I said, If I get the job, you got the job.”

Scott wasn’t entirely sure he would get to keep the job, however.

“He loves to tell the story,” Swinney said. “He went home that night, telling his wife, he is so excited. Coach Swinney tells me if he gets the job, we got seven weeks to go, he's going to hire me. Then all of a sudden across the ESPN ticker, the last 30 years zero interim coaches at the mid-season got the job, zero out of 29 or whatever it was. He loves to tell that.

“But he's awesome. He was a great ambassador, representative of our program, Clemson University. Unbelievable recruiter, too. Just did a great job, recruited a lot of great young men to Clemson.”