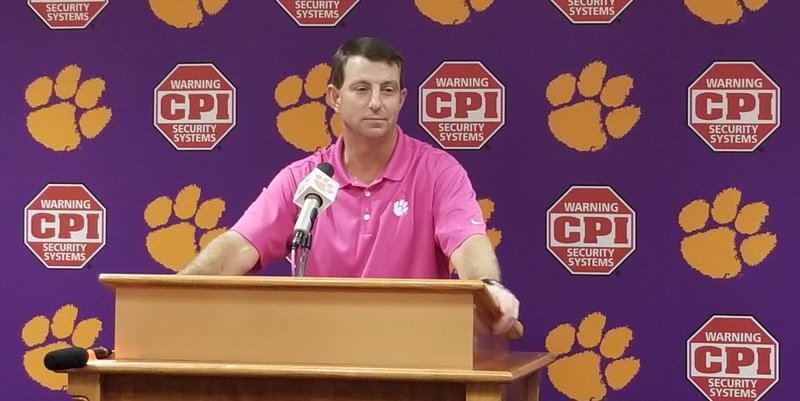 A video surfaced late last week that showed two players holding an impromptu boxing match while the rest of the team was in meetings, and it quickly went viral.

Swinney wasn’t pleased and told the media that he addressed it with his team.

“Oh yeah, we had a chance to address that. It's stupid. First of all, it's an old video. I don't know when it was shot but it's an old video,” Swinney said Tuesday. “We had a couple of walk-ons in there with a little too much time on their hands. We all have raised kids and sometimes young people with a little too much time on their hands do stupid stuff. You've got a pair of boxing gloves laying around, the next thing you know you've got a boxing match going on. You've got a mat on the ground, boys will start wrestling and goofing off. It's been going on forever and ever and ever and ever. It's just that somebody had a video of it and put it out and it was brought to my attention. It's obviously something that we don't tolerate. It's them being goofy and goofing off down there.”

Swinney said you don’t want to ruin a new house.

“I told them it's like you buy a house. You go to school, you get that job, you get married, you've got your family and you're getting on with your life,” Swinney said. “Finally, because of your name and your credibility that you've established, you've got a bank that's going to loan you $300,000 and you've got to bring them $30,000 and you're going to own a home. Isn't that awesome? It's going to be in your name. Now, you're excited and you move into your new home, you get some furniture. You get the no interest for four years and you get the furniture and you're excited to come to your new home and here you go with your life, are you going to push the furniture out of the way and invite the boys over and say, 'Alright boys, let's wrestle!’

He then said it wasn’t even a good boxing match.

“It was a bad boxing match. Somebody could've gotten hurt,” Swinney said. “It's just stupid. That's how all of a sudden somebody gets hurt because they're goofing off. Things that can be prevented that you don't need to be dealing with."

While the video hit social media late last week and made national news, Swinney said he can assure everyone that's not when it was recorded.

“I think anything that is associated with Clemson is going to be some type of news," he said. "Like I said, it was an old video. It wasn't anything that happened last week. I guess whoever had the video decided to put it out last week. I guess that was the most viral opportunity you could get because it came after a loss. I don't know when the video was shot, but there wasn't anybody having any boxing matches down there last week, I promise you that.”

Clemson Football is about that life. They have a damn fight club in the lockeroom. @clemsonbarstool @barstoolgamecocks