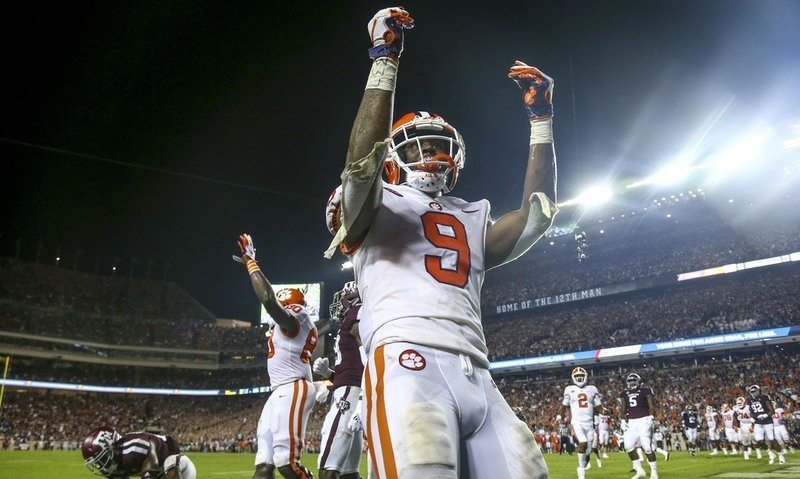 Tee Higgins was a big factor in the win, taking three catches 123 yards with one touchdown. (Jerome Miron-USA TODAY Sports)

No. 2 Clemson's trip to Texas A&M looked on paper to be one of the bigger tests the regular season would bring the Tigers.

Saturday's action was all that and more as the Tigers escaped College Station's Kyle Field with the 28-26 win.

This season the ‘Second Look’ features the TigerNet staff grading the Tigers as a group and offering some different perspectives on the action each week. Here’s our look at week two of Clemson football:

Clemson’s quarterback system has the attention of the college football world as similar battles at Playoff contenders seemed to have reached conclusions. And midway through Saturday’s action, the Tigers seemed to be trending the same way.

A senior in Kelly Bryant and a freshman in Trevor Lawrence took care of the ball well for a second-straight game - almost to a fault in opting for the more conservative option most times. Deep throws were placed well at points and others were overthrown but well out of harm’s way. Both were beneficiaries of their talented receiver corps - particularly the Volunteer State duo of Tee Higgins and Amari Rodgers - making plays.

Also at points they were hamstrung by missed assignments and Tiger o-linemen just being beaten by a quick A&M front, which accelerated the mental clock on getting rid of the ball. That was particularly true for Lawrence in his road debut as the game went on. Quick screens on the outside were clearly part of the plan to get some easy yards but were routinely shut down by the Aggies’ athletes. 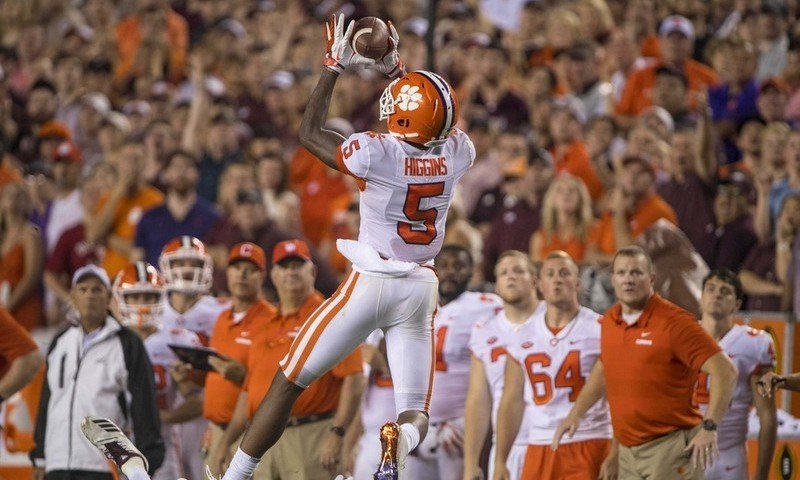 Tee Higgins was a big factor in the win, taking three catches 123 yards with one touchdown. (Jerome Miron-USA TODAY Sports)"

Bryant did rebound well from a mishandled snap at the goal line to close his first half with a string of solid throws and also a couple key scrambles to extend back-to-back second-half TD drives that proved to be decisive.

Third down woes did continue as Clemson currently sits in 96th nationally in conversions - most notably Bryant missing a third-down throw and then a keeper getting stuffed to keep the Aggies in it late.

Being one of the tougher tests on the schedule, some struggles are afforded - especially given the road environment - but this game had the feel that the offense couldn’t shift into the gear they should’ve to pull away. The good news is the ‘W’ is on the board, but there is plenty of room for improvement going forward. -- Brandon Rink

Clemson’s defense has had better days.

For three quarters Saturday, Brent Venables’ group bent but didn’t break and the Tigers held a 28-13 lead. Texas A&M wouldn’t go away, however, and quarterback Kellen Mond threw for 201 yards and two touchdowns in the fourth quarter as part of a 430-yard night. Overall, the Aggies gained 501 yards and held the ball for almost 34 minutes. The 501 yards were the most allowed by the Clemson defense since allowing 568 yards to Lamar Jackson and Louisville in 2016.

Despite the strong start, Clemson’s defense began to show cracks in the final quarter and A&M pulled within two points with under a minute left.

K’Von Wallace intercepted Mond’s pass in the end zone on the 2-point conversion to secure the win, but the lack of depth in the secondary is now a concern.

It’s a passing grade for the defense, but barely and only because they walked out with a win. -- David Hood

Clemson’s special teams unit was about as close to perfect as one can get during the opening week of the season, but a step up in competition proved challenging. There was still plenty of good to go along with areas that need improvement, however.

Starting with the good…Greg Huegel and B.T. Potter continued their excellent start Saturday night. Huegel was 4-for-4 on extra points, while Potter – who was making his first-ever start on the road didn’t let the environment affect him and showed consistency in his deep kickoffs.

Dexter Lawrence blocked a field goal attempt in the second quarter – the third blocked kick of his career. It was first blocked kick for Clemson since October 15, 2016 when Christian Wilkins blocked a kick against N.C. State.

Punting and punt coverage were certainly an issue Saturday. Punter Will Spiers’ doesn’t look terrible at 40.1 yards, but a late fourth quarter punt of just 22 yards set the Aggies up near midfield, setting up Texas A&M’s final touchdown of the game. -- Nikki Hood