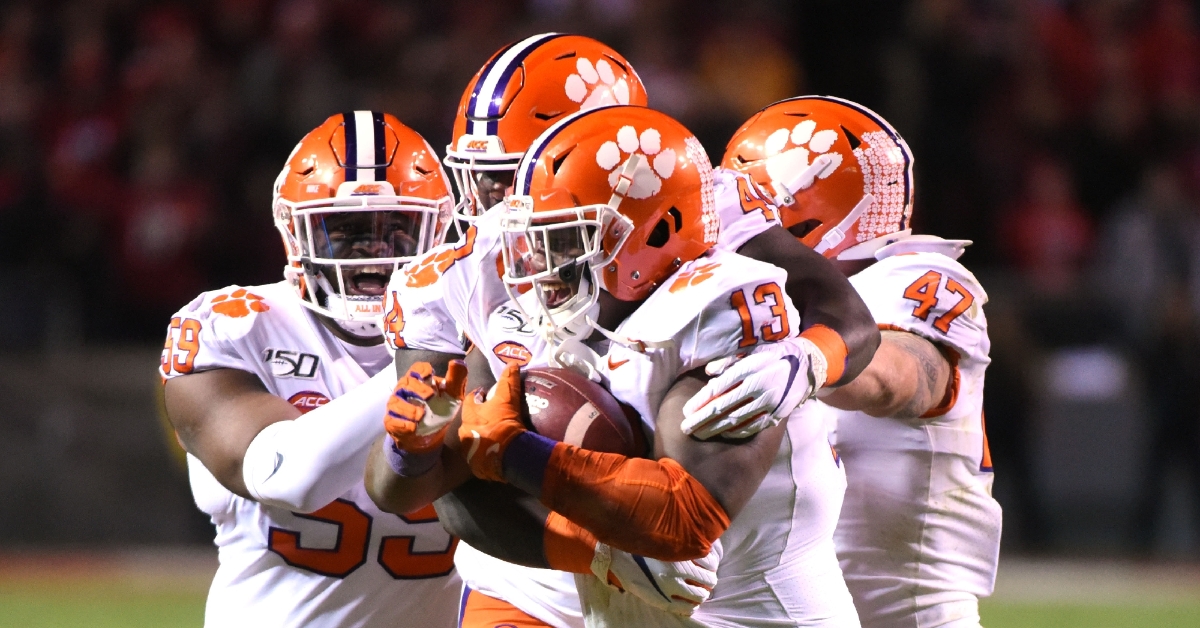 Clemson clinched the Atlantic Division with another dominant effort on both sides of the ball in Raleigh.

TigerNet tackles game No. 10 for the Tigers with the key takeaways and game grades.

What we know about Clemson football (game-week 10)

About 45 minutes before kickoff at Carter-Finley Stadium Saturday night, I walked down the Clemson sideline and found ESPN college football analyst Kirk Herbstreit playing catch with one of his sons. I looked over at Herbie and said, “Are they going to break out the orange pants?”

He looked back and smiled, and said, “I think so!!”

That, in total, was the amount of drama and the only thing that was ever in doubt between the Tigers and the Wolfpack. Clemson led 28-0 at the end of the first quarter, 42-0 at halftime and was playing subs very early in the third quarter. The only question left was what the final score would be.

I know people sometimes tire of Dabo Swinney’s “play to a standard” mantra, but when you’re outclassing any and all competition it’s the one way to keep the players engaged in the process. Clemson players go out and play to that standard – against Clemson – and let everything else fall to the side.

When the game lacks drama 15 minutes in, it’s the only way to do it. - David Hood

* The calendar’s turn to Clemson’s championship phase is showing a team that can name its score and limit most any offense whatsoever from the opponent. Top-four rankings nationally in total offense (2) and defense (4) and the top-six marks in scoring averages on the attack (6) and on defense (3) are no fluke adjusted by schedule — the challenges still few this season, however. From a schematic and efficiency standpoint, the Tigers are so far out in front of its schedule recently and making a statement with each 60-minute period whether pollsters and pundits are paying attention or not.

Travis Etienne has led the nation in yards per carry over the last couple weeks and has used his uncommon combination of speed and power to be the most explosive running back in college football — taking 17 touches for 144 yards and three touchdowns on Saturday.

Lawrence continues to show his progression as a player, limiting mistakes (no turnovers), efficiently passing (20-of-27 for 276 yards, 3 TDs) and using his legs to add a dimension (eight carries for 59 yards, TD) that makes this as potent an offense as there’s been in Clemson recently.

The focus in the face of a not-so-challenging opponent on defense was impressive as well. The first-team did give up the rare touchdown in the second half, but up against tricks and some tempo from the young yet beat-up NC State attack, they were able to maintain the streak of under 300 yards allowed (290). The linebacker trio of Chad Smith, James Skalski and Isaiah Simmons continued to be disruptive (15 tackles, 3 TFLs, forced fumble) and the back-seven group as a whole held an opposing QB under 50 percent passing for the fifth game in a row (14-of-29 for 166 yards; six out of seven games and seven out of 10 with under 50 percent allowed this season).

Clemson has gone along at its own pace this season and is right where it wants to be going into the final stretch. - Brandon Rink

People around the country wonder how Swinney and his coaches recruit at a very high level. The look on offensive lineman John Simpson’s face during postgame interviews told the story.

Simpson stood in the NC State Wolfpack’s halftime locker room and answered questions about his first career touchdown, a one-yard plunge in the second quarter. Simpson has always been engaging with the media – he’s a great interview – but Saturday night was on a different level.

There are times when players want to escape the postgame crush of cameras and microphones, but Simpson stood in front of a locker and answered each and every question with the world’s biggest smile. Some media members would drift away, their questions done, and others would arrive to ask the same questions.

Simpson answered each and every question and might have stayed all night if Football Communications Director Ross Taylor hadn’t pushed him towards the Clemson buses.

That’s why players want to come to Clemson – even offensive linemen have touchdown dreams. - Nikki Hood

Clemson continues to build and add looks that have opponents on their heels, with Lawrence taking care of the ball and Etienne barrelling over defenders — there may not be a better looking offense in the country at the moment.

The consistency week-to-week of this group is remarkable and to not give up a single game of over 300 yards is impressive through 10 contests.

It was a quiet night for the special teams group but punter Will Spiers got some nice rolls and totaled two attempts of over 50 yards and two that landed inside the 20 in four attempts.