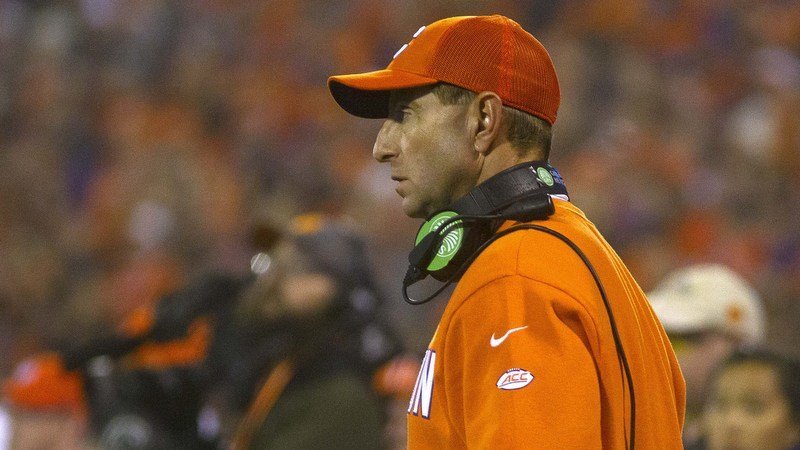 Clemson head coach Dabo Swinney glares at an official during the win over the Gamecocks (Photo by Josh Kelly, USAT)

No. 2 Clemson plays Pitt Saturday in the ACC Championship Game, and he spent the first few minutes dissecting the Tigers’ 56-35 victory over arch-rival South Carolina but didn’t wait for another question to be asked before getting something off his chest.

We wrote a story where we overheard a fan say the win felt like a loss because of the defensive breakdowns, and Swinney came out swinging when he heard talk of such comments.

“I have been a part of this thing for sixteen years,” Swinney said. “I just want to win by one more point. If that ever gets to where that is not enough. It is time for me to move on to somewhere else… I’m definitely not going to be disappointed over a 21-point win over a state rival, ever.”

Clemson defeated South Carolina for a fifth consecutive season, but the defense allowed 600 yards and quarterback Jake Bentley set a rivalry record with 510 yards, the most ever against a Clemson team. However, the game was never really in doubt and the Tigers won by three touchdowns over a rival that had nothing to lose, and Swinney made sure everyone heard his feelings on the subject.

“And you people that suggest that it felt like a loss, y'all need to check yourself, too,” he said. “And for all of those people out there that want to complain about the five wins in a row and by winning by three touchdowns. Man! That is shameful! That is a lack of respect for our program and a lack of respect for the work these players and coaches put in.

“I hope you write that - this is a 12-0 football team. A senior class that has won 52 games and we have people complaining. Give me a break. If 12-0 is not good enough, then it is time to seek other places. Make sure you get that.”

A media member asked Swinney if some of the reactions to the win came from a fan base spoiled by success, he doubled down on his comments.

“I say it one more time. We have had eight 10-plus win seasons,” Swinney said. “We are 12-0 for the third time in the history of this school and we have won five state championships in a row. When that is not enough for some people, that is sad.

“I have been a part of that when we have lost five of those in a row. There has been some articles pushed my way and some comments from people. This program is never going to be that way and I am not going to stand for that. It is too hard to win. These players work too hard. The goal is to win period and that is just the way it is. I don’t want to ever be a program, ever, that does not appreciate winning.

“When you win by three touchdowns in a state championship, you got people that can’t appreciate that then that is really sad. That is really sad. Just look around college football. There are a lot of places out there that would love to have the program we have here. I can assure you of that.”