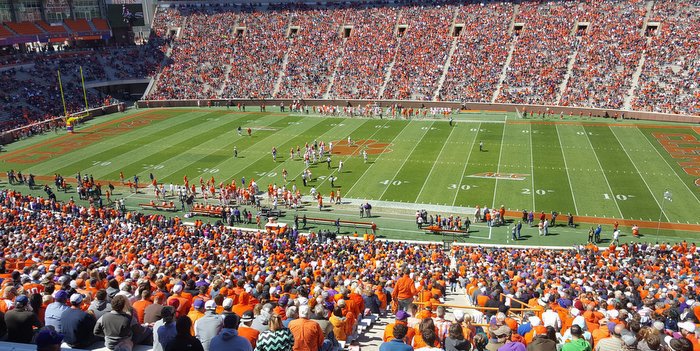 CLEMSON – Clemson’s spring game is underway in Death Valley under sunny skies and with a chilly wind with the Orange leading the White 14-9.

Played a few series for each team, and he was as good as expected. Watson completed a 47-yard pass to Hunter Renfrow on the second play from scrimmage, and followed that up with passes of 10 yards and four yards – all to Renfrow – for an early touchdown.

Watson later hit Ray-Ray McCloud on a 61-yard touchdown pass, another pass where the wide receiver got behind the defender. He spent the rest of the half standing with head coach Dabo Swinney behind the offense, getting his mental reps.

Based off what we saw in the first half, Choice looks to be the guy that will back up Wayne Gallman at running back. Obviously a lot of what Choice and Tyshon Dye and C.J. Fuller are able to accomplish are the result of offensive line play, but Choice runs downhill and just looks to have that burst you’re looking for.

Artavis Scott and the kickoffs

Scott had a long kickoff and punt return in the first half, and both times he was tackled by the kicker. However, he looks like a weapon in the return game. He also had a couple of nice catches in the half.

None of the kickoffs were impressive and the punting has been very lackluster. A strong breeze might have a little to do with that.

I like what I’ve seen out of Dexter Lawrence – even though he still tends to get a little high with his pads at times – but he’s that immovable object we’ve been hearing about.

Wilkins has indeed spent time at defensive end, and while he hasn’t made a lot of plays it also looks like he’s been held on a lot of them. Love his burst off the line from end.

Bryant and Ferrell have also looked good at times, especially Bryant. He looks like a guy that wants to win a job. On the last play of the half, Bryant looked like he was shot out of a cannon to "sack" the quarterback on a hail mary attempt.

Other than running ability, there just doesn’t seem to be a lot of separation between Nick Schuessler and Kelly Bryant, other than Bryant’s ability to run the football. Both have had their good moments and their bad moments – both have a tendency to hold on to the ball too long – but Schuessler might have an edge in the passing game.

Turnovers have been the difference between the two quarterbacks. Bryant has thrown two interceptions - the first by Marcus Edmond and the second by Ryan Carter.

Dabo Swinney challenged Clemson fans to show up for the spring game, specifically asking for over 50,000 to attend. Just from our observations, Swinney got his wish as most of the lower deck and the hill were full.