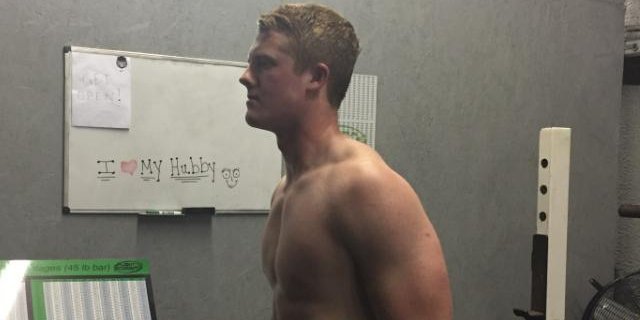 Following Clemson head coach Dabo Swinney’s high school camp in June of 2015, a picture of Venables made its way to Scott Littlejohn, the director of Flight School, a sports performance training school in Anderson.

Littlejohn texted the picture over to Venables, who had one reaction.

“I saw that picture, and I wanted to throw up,” Venables said. “That kid looks sick. Give him a sandwich.”

That picture started Venables on a quest to be the best linebacker he can be.

Venables sits at 228 pounds today (he wants to stop around 235), but adding over 50 pounds of muscle hasn’t been easy, even for a hungry teenager.

“I’m eating six to eight meals a day. That’s one thing that my dad emphasizes to me. I have to be constantly eating,” he said. “There are some classes at school that the teachers don’t let us eat in class, but I’m finding a way to stuff food down my throat. It’s hard because you have to be committed to sitting through all of those meals. Sometimes it takes me an hour before I can leave the dinner table because my dad is just giving me more plates.”

Most of us have to watch what we eat, and even when we eat tiny meals, we still gain weight. For Venables, he has to make sure all of his meals consist of the right kind of foods.

“First, I have to make sure that I’m eating the right foods because around here my dad doesn’t give us much sugar, so you’re not going to be able to find a lot around our house,” Venables said, talking about Clemson defensive coordinator Brent Venables. “I work out at Flight School, which is where Ben Boulware, Kendall Joseph and Martavis Bryant all train. We are training every day. It’s insane. We’re always shocking our muscles and doing new stuff. We’re always adding in new stuff. I’m adding in a whole lot of running, too, as well as weights. The main thing my dad has emphasized is flexibility because I don’t want just to get really big but not be able to move my body because that doesn’t do me any good.”

For a linebacker, flexibility is just as important as brute strength.

“At Flight School, before we ever start lifting weights, we’re really emphasizing our explosiveness and our hip mobility and flexibility,” Venables said. “That’s the main thing. We’re stretching five times throughout the three-hour workout. The thing that my dad and Coach Littlejohn at Flight School emphasize is change of direction because as a linebacker, that’s the name of the game.”

Venables will get his chance to gauge his progress when he competes at Nike’s Opening Combine in Charlotte in two weeks. What else does he want to prove?

“That I belong with the best. I know I’m up there and I know I have a shot to make it to Oregon this summer,” Venables said. “It has been a goal of mine to get an invite since I was a little kid.”

However, Venables isn’t all work and no play – he’s having fun acting as a recruiter and helping build what figures to be an outstanding 2018 recruiting class at Clemson.

“It’s much more fun than being the recruit,” he said. “I’m just sitting here watching things fall into place. It’s kind of cool because I know everything before it happens. It’s awesome, and it’s been great. We’re going to get a whole lot more guys, and it’s going to be big time.”