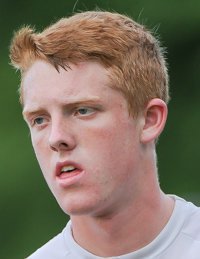 Linebacker
B I O
Played Outside linebacker for Daniel High School… ranked as the fifth overall prospect in the state of South Carolina and 30th best linebacker in the nation by 247sports…listed as the seventh best player in South Carolina and No. 32 linebacker by Rivals.com…named to the All-Region I-AAAA team… played for the South Carolina team in the Shrine Bowl…had 70 tackles during his senior season at Daniel High, he had 22 tackles for loss, five of which were sacks…had an 85-yard interception return for a touchdown against Westside early in the season…had season high 15 tackles against Pickens…also a starter as a sophomore and junior….played his high school football for Jeff Fruster….wore No. 15 at Daniel…also played on the Daniel basketball team in 2016-17…committed to Clemson on 12/18/2016, his dad’s birthday, he will sign with Clemson just two days after his dad’s birthday, Dec. 20, 2017… son of Clemson Defensive Coordinator Brent Venables, the winner of the 2016 Frank Broyles Award. …recruited by Brent Venables

He played in the Freshman All-American game in San Antonio.