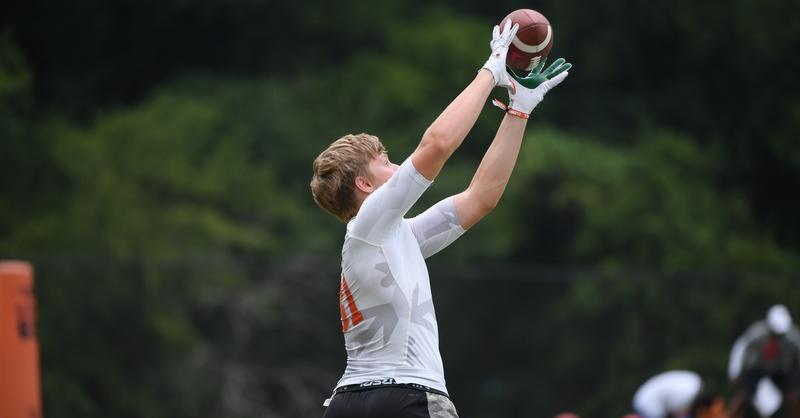 Berrong catches a pass during camp

The nation’s number one tight end visited Clemson for head coach Dabo Swinney’s high school camp a few weeks ago, and now he’s hopeful an offer is on the way.

Cane Berrong is a 4-star 2021 prospect (6-4, 220) out of Hartwell (GA) Hart County that is listed as the number one tight end nationally by 247 Sports. He has offers from across the nation, including Alabama, Georgia, Florida, LSU, Notre Dame, Michigan, Oklahoma, Texas, and Wisconsin.

“It was my third time visiting Clemson,” Berrong told TigerNet. “I came over after practicing with my high school that morning from, and I made the trip with my head coach. I really like that Clemson is a family atmosphere. Coach Pearman spent the most time with me and we’ve had the most contact. He’s a good guy.”

Did Pearman mention a Clemson offer?

“He just said they would start offering the 21s in a few weeks and that I set the bar for my class,” Berrong said. “He told my HC that he knew I was fast but not that fast.”

Where would the Tigers stand if the offer came and when does he want to make a decision?

“They would be up there for sure. It’s like a half hour from home,” Berrong said. “My mom would be happy for sure. I want to make a decision soon. I want to see how the 20 class shakes out and look at rosters. So, it could be as early in the fall or after signing day.”

Berrong is more than a traditional tight end. In watching his film, he’s either in the slot or off the line of scrimmage or sometimes flexed out wide. He also lines up in an H-back type role and could potentially block out of that formation.

However, he sees himself as a receiver.

“I’m a Irv Smith, Jr., type of TE. I’m not a 6’6 guy,” he said. “I’m going to beat you coming out of my breaks. “I’m a 4.2 shuttle guy and with top end speed because I’m a 4.5 guy at 220 pounds. I do have length as my wingspan is 6’5 and can go up and get the ball. I’m at a 31 inch vertical right now so I want to continue work on getting more explosive to improve that and take a more physical approach after the catch and start running some guys over.”