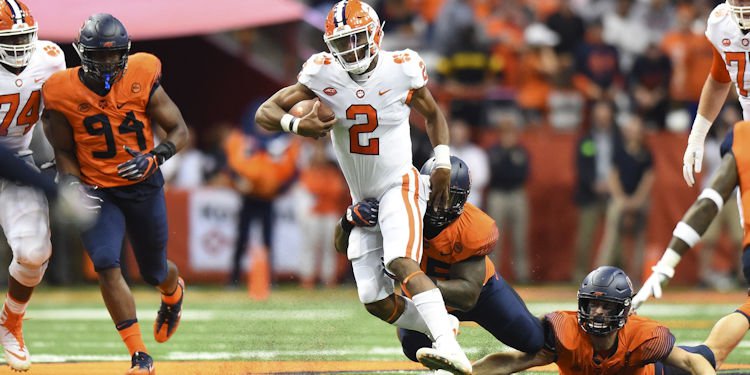 CLEMSON – Through six games, the Clemson offense was among the nation’s leaders in third-down conversion percentage at 49.2 percent, good for 11th-best in the nation.

With a hobbled quarterback to start the game and a backup quarterback that finished the game, the Tigers were a paltry 2-of-11 against Syracuse in a 27-24 upset loss. Co-offensive coordinator Jeff Scott told the media Tuesday that a failure to gain yards on first and second down led to the third-down woes.

"After studying the video, the biggest thing that stands out is that we were 2-of-11 on third down. Up until that point, we've been pretty good on third down this year but that was a big part of the game so going back and looking at what the issues were on third down,” Scott said. “The big part of it that 6 of the 11 were on third-and-10 or longer. We really put ourselves behind the chains. We had five tackles for loss and one penalty on first and second down that really put us in those third and long situations which were difficult, and we had one opportunity on the third and short early in the game that we didn't get. Yesterday was all about studying the video as coaches and players, finding where the mistakes were and taking ownership of that and finding ways to get that corrected and learning from it and moving on.”

Clemson was tackled for a loss five times on the night.

"I think the biggest thing is you go look at them individually and how did they happen. It really comes down to maybe one guy on each of those plays and one guy not doing his job and having a missed assignment,” Scott said. “As coaches just showing the guys how it takes one guy to not be where he's supposed to be, and we had that happen several times. Against a defense like that, that's very attacking, it's hard to get behind the chains, and as coaches we've got to put our guys in position to execute. They've got to do a good job of their assignment and executing it. There's a very fine line and you see that in that type of game. It wasn't like there was10 or 12 mistakes. It really comes down to five to seven plays and that can be the difference in those type of games."

The Tigers hit tight end Milan Richard on a 24-yard pass play midway through the first quarter, but the deep ball was nonexistent after that play, and Scott said teams haven’t been playing a lot of man coverage.

"It's a combination of finding the right spots, and we had one early where we hit Milan early and tried to take a deep shot, and they were in cover two and ever since maybe Wake Forest on the first drive where we hit Deon on the man coverage, we haven't really gotten a lot of man coverage in those last two games,” Scott said. “We as coaches have to find some opportunities and the other thing is just being patient and taking what they can give you, and that can be frustrating because you want to throw the ball downfield, but you've got to be smart at times as well."

Bryant went into the game with a sore ankle and suffered a concussion late in the first half, and Scott said the coaches will continue to evaluate backups Zerrick Cooper and Hunter Johnson and split the reps.

"We'll continue to do that like we have been. We expect Kelly to be healthy and back. I thought Zerrick did a good job of getting thrown in that situation with the game on the line and playing an entire half,” Scott said. “He did a lot of good things, and he made some mistakes, and something he'll learn from and Hunter is right there. Hunter is going to get his opportunities at the right time. He's been doing a better job in practice, and hopefully, they don't have to come into a situation where Kelly's injured like that, but hopefully, we get those guys some more experience as it goes.

"Yeah, I think Deon was involved. He probably had more catches last week, seven catches, than he had last year. I think the biggest thing we all want to see is the deep ball down the field with the deep shots. I think you see a lot of the soft coverage is because of Deon and what he's shown on video and Ray-Ray and you think earlier in the year those guys had some nice deep balls down the field and teams have chosen not to give us those balls and stay patient and take the easy six-seven yards, and those are the ones we're getting and there are certain times where we want to find those deep shots to throw the ball down the field and that's what we'll continue to work on."