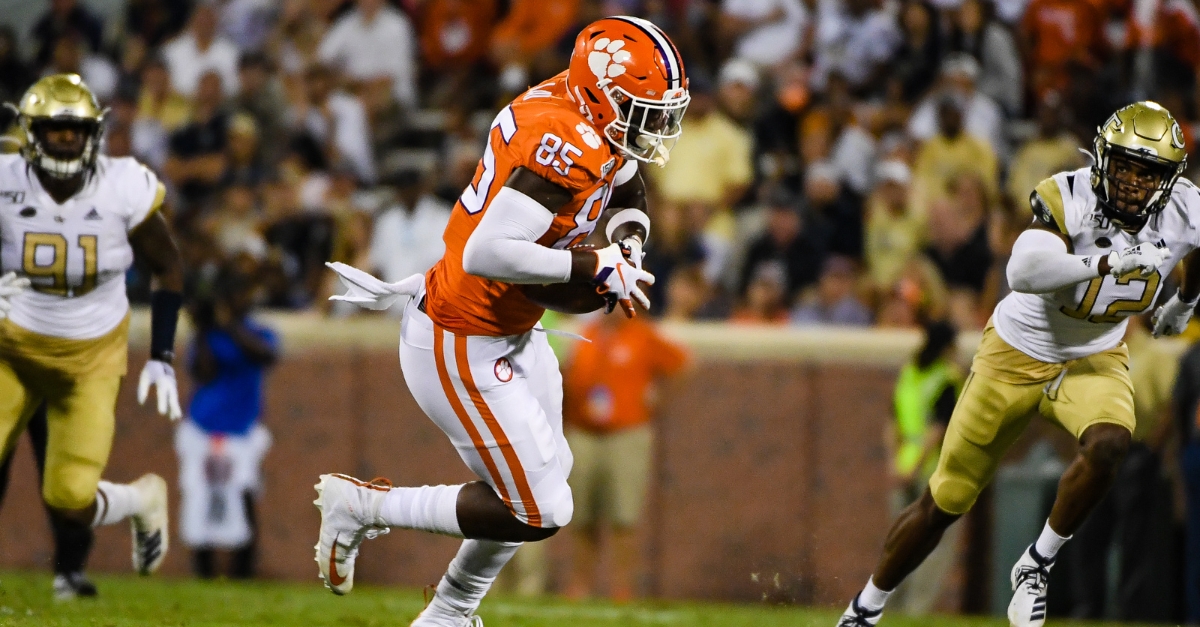 Lay is one of the bigger tight ends in the country

Jaelyn Lay walked onto Clemson’s campus looking like one of those players that head coach Dabo Swinney says looks great getting off the bus. Standing 6-foot-6 and weighing in at 270 pounds, there is no doubt that Lay is impressive in stature.

But when it came to football and football strength there was work to be done.

Lay played 46 snaps over four games while redshirting during the 2019 season. He caught a 20-yard pass in his collegiate debut vs. Georgia Tech. He also saw action against Charlotte and Syracuse during the regular season and played against Virginia in the ACC Championship Game in early December.

Lay said he didn’t mind redshirting because he knew he needed to improve.

“It’s been OK,” he said of the redshirt year. “You’ve got to work to do better and do what you can to improve for next year or whenever you can play. This year we got four games so just doing whatever you can do get better when you play.”

He was rated as one of the top five tight ends or H-Backs in the nation by ESPN and Rivals, and ESPN ranked Lay as the fourth best tight end/H-back, while Rivals ranked him fifth in that position. He was ranked as the No. 165 best all-around player in the nation and 16th-best player from the state of Georgia and ranked as the 21st-best overall tight end by 247Sports.

Lay said his proudest moment was a block during the game against Virginia, a simple play that gives him the confidence he can be a regular contributor next season at tight end, a position he is still learning to play.

“It was very difficult. In high school, I only played wide receiver,” Lay said. “It was rare that I worked at tight end. If I was, I was just running out on a go route. I mainly played slot receiver and wideout in high school. Coming here and playing in the backfield and playing attached was a big adjustment.”

Where did he improve the most?

“I improved in the weight room,” Lay said. “When I came here, I could barely do a 225-(pound rep) twice. Now, I can do it at least 15 times. Focused on my route-running and blocking. I’ve worked with the scout team. It’s been helping.”

He puts the extra time with strength and conditioning coach Joey Batson to good use.

“I always try to do extra. Try to do five pounds more than my last set,” Lay said. “I think that was how I was able to build up.”

Lay said he will use the winter and spring to get into the playbook and work on his technique so he can play naturally.

“Staying true to technique and what I’m used to playing so I can play free,” Lay said of his offseason plan. “Not overthinking everything and keep playing and have fun like I did in high school.”

At 6-6, Lay is tied for tallest tight end in Clemson history and he sees his size - including his weight – as an advantage.

“I love being a mismatch. Most people on paper think my weight is a lot,” he said. “I’m still fast and quick and I have good route-running. That’s a good part of my game that I have and I have a good catch radius.”