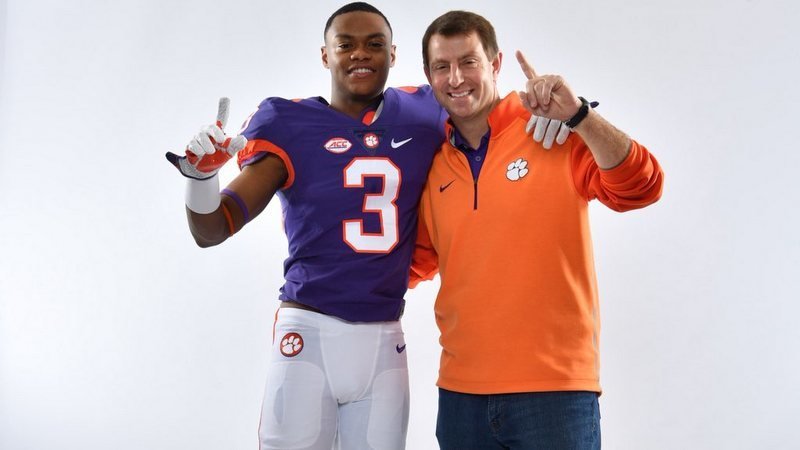 That was the message espoused by recruiting coordinator Brandon Streeter during his National Signing Day press conference last Wednesday. The Tigers reeled in the nation’s fifth-ranked recruiting class – according to ESPN – and were a consensus Top 10 by most media outlets despite signing just 17 recruits.

Streeter took to the podium in the team room at the new football operations center to discuss the class but spent the first six minutes of the session thanking everyone involved in the Clemson recruiting process. He mentioned the members of Clemson’s social media team, graphics staff, the pilots of the team plane, secretaries and the other support staff that make up Clemson’s giant recruiting operation.

“You've heard about how it takes a village to raise a child. We talk about that a lot with our players here,” Streeter said. “When they come on their recruiting trips here, we show them the picture of all of the families and how many people are going to be involved with them as they go throughout their career here at Clemson. It's so true. It really carries over into the recruiting process.”

Streeter said the coaches that go out on the road recruiting are given the lion’s share of the credit when a big-time prospect chooses Clemson, but the reality is that there are dozens of support staff back home making sure each coach has all the tools necessary to do his job.

“Even when we are on the road it takes a village, and that village is all of the people involved behind the scenes and the coaches on the road,” Streeter said. “There are so many different tactics and different ways that we go attack this recruiting process. But being on the road with the full-time coaches, it's been an honor to be a part of that. It's neat to work with these guys and to communicate the way that we do. We have different strategies for each guy. “

He then went on to say that it’s easy to recruit when coaches don’t let egos get in the way of the job and you have a leader who sets the tone.

“There are no egos in our staff and that helps a lot of things and that makes things go smoother. It all starts with Coach Swinney and his vision for our program and his leadership and what he represents,” Streeter said. “It's easy for us because we just follow his direction. We echo all of the comments that he gives to us in the meeting room and then we go and attack it in the recruiting process and find guys that fit our program. You've heard it before - we are looking for the fit and the right fit. We aren't just chasing the stars behind the name. That is what we do and it's worked so far.”

The strategy has worked – Clemson was named the nation’s number one recruiting brand in a recent survey and it led to the 2018 recruiting class hailing from different parts of the country.

“It just shows that our brand is getting stronger and stronger,” Streeter said. “I know I mentioned last year that we're getting guys here and there from different states that are a little bit further away. Like we had Kansas with Isaiah Simmons and a couple other guys, and then Missouri this year. And then getting the No. 1 guy in six different states? I don't know if anybody else can say that, but that's strong. It's a tribute to the people here, and to the brand of Clemson University. It's exciting, it really is. Fired up about it." -