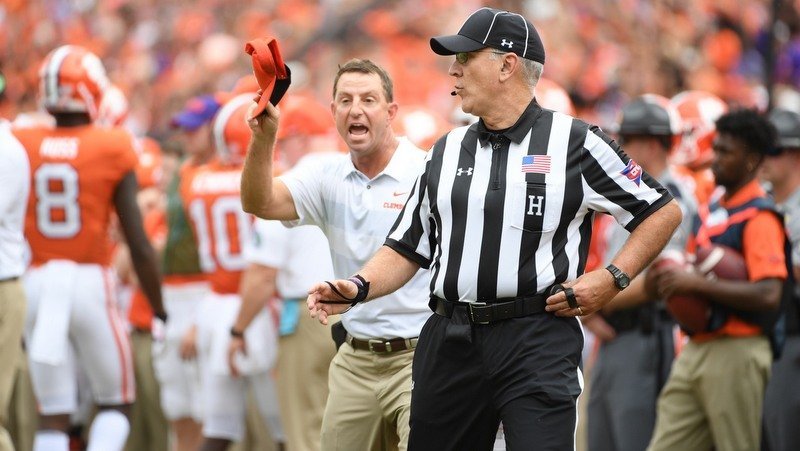 CLEMSON – Dabo Swinney’s worst nightmare occurred late in the first half when quarterback Trevor Lawrence was unnecessarily hit and was forced to exit due to concussion protocol.

Without Lawrence, Clemson is down to just Chase Brice at quarterback.

Clemson’s defense was reeling to end the half as Syracuse led 16-7 at intermission.

Cue the anxiety in the Valley.

PLAYER OF THE HALF: Clemson’s offensive line…The offensive line unit for the Tigers has come under fire during the first part of the season, but for most of the first half, they looked like the unit we thought they could be. They kept Trevor Lawrence upright and opened holes for the running backs.

STAT OF THE HALF: Syracuse’s first-half touchdown was the first allowed by Clemson at Memorial Stadium since Nov. 12, 2016. The Tigers held opponents without a first-half TD in Death Valley for 686 days, including 309:52 of game play.

WHAT WENT RIGHT: Clemson’s running game really carried the offense during the first half with Travis Etienne, Tavien Feaster, Adam Choice and even Trevor Lawrence all getting involved.

A lot of fans like to gripe about the play calling, especially when it comes to the screen game, but Lawrence found Amari Rodgers and Hunter Renfrow on screens during the first half and the plays picked up positive yardage every time. Stop me if you’ve heard this before, but it looked reminiscent of the offense in 2015 and 2016.

On defense, Brent Venables likes to change the calls at the last second, but the defense stayed in a lot of base and executed its will for most of the half.

On Clemson’s first drive of the game, Trevor Lawrence held the ball just a little too long when trying to decide whether or not to give it up and the play ended in a fumble recovered by Syracuse.

For the second time at home, kicker Greg Huegel has had a rough go. He missed two field goals two weeks ago against Georgia Southern and missed his first attempt of 47 yards Saturday afternoon.

Clemson’s depth and inexperience in the secondary showed late in the second half when Nolan Turner – who is seeing is first true game action this season – was beat on a long pass play that set up Syracuse’s first touchdown.

Syracuse used Clemson’s aggressiveness against them as quarterback Eric Dungey would hold onto the football for an extra second to set up the screen game with the running back.

TURNING POINT OF THE HALF: Trevor Lawrence left the game with what appeared to be a concussion.

WHAT CLEMSON NEEDS TO DO TO WIN: Get Chase Brice ready to lead the offense - or Lawrence back in actoin - and rely on the running game to move the ball.