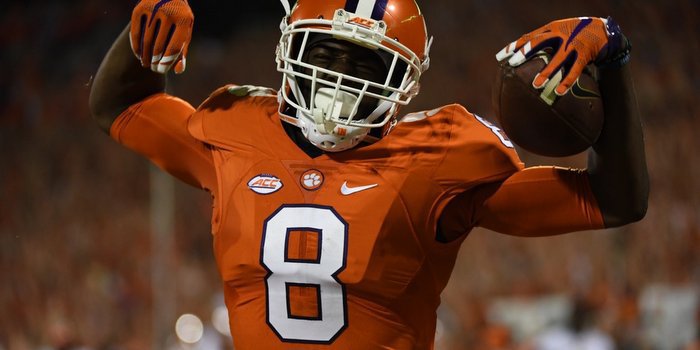 CLEMSON – One yard short after Clemson was left for dead.

Louisville’s James Quick was knocked out of bounds one yard short of a first down on fourth down inside the Clemson five-yard line with just over thirty seconds to play, and No. 5 Clemson overcame a 36-28 deficit in the last six minutes in defeating No. 3 Louisville 42-36 in front of 83,362 screaming fans in Death Valley Saturday night.

Clemson had scored the go-ahead touchdown with just over three minutes to play, but Louisville marched down the field in emphatic fashion and had it 4th-and-12 at the Clemson 14 with 37 seconds to play. With the season on the line for both teams, Jackson completed his pass to Quick on the right sideline, but Quick was knocked out of bounds by Marcus Edmond at the three, one yard short of the marker, and the Tigers took over on downs.

Clemson trailed 36-28 late, but Artavis Scott’s 77-yard kickoff return fueled a fast and furious final seven minutes for the Tigers, who improve to 5-0 on the season and 2-0 in the ACC. Louisville falls to 4-1 and 1-1 in the ACC.

Two years ago in Clemson, the Tigers held on fourth down inside the five, with a pass intended for Quick knocked away by former defensive tackle DeShawn Williams.

With Florida St.’s loss to North Carolina earlier in the day – giving the ‘Noles two conference losses – the game turned into what would almost be a de facto ACC Atlantic championship game. Clemson would have to lose two more conference games and Louisville would have to run the table in the conference in order to have a chance at winning the Atlantic. Clemson plays at Florida St. on Oct. 29th. 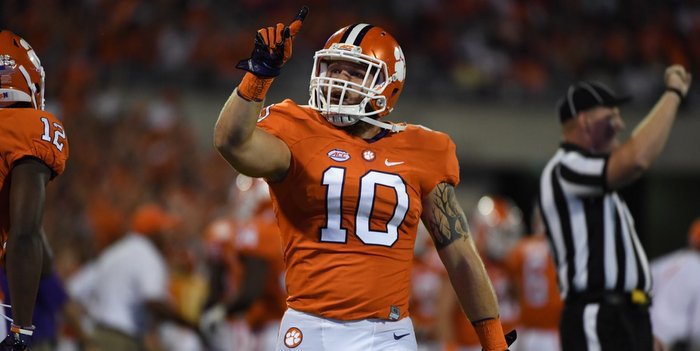 "What an awesome moment to be a part of. I am sure it was awesome to watch and it was awesome to be a part f most of the time," head coach Dabo Swinney said after the game. "Incredible. Just an incredible game. It's what makes college football so much fun. I love the effort, the toughness, the passion and the heart our guys have for each other and they believe no matter what. Five turnovers, two in the redzone and one of them a touchdown, against the No. 3 team in the country and we win. Incredible Let me tell you how that happens: character. Culture. Heart. And group of young men that believe no matter what. Just awesome to be a part of. It's special."

Clemson jumped out to a 28-10 lead at halftime and appeared on the way to routing the Cardinals, but three second half turnovers helped Louisville scored 26 unanswered points and take a 36-28 lead with 7:52 to play, setting up Scott’s kick return.

"Offensively, we made it hard. "I told them with 7:52 to play and we are down eight that players make plays," Swinney said. "Coaches can only put you in position. We had the throw to Ray-Ray and give the ball to an offense that scores 63 points a game. And then we have a turnover in the redzone and said defense go get it. Our defense has never played that may snaps."

Louisville outgained Clemson 568-507, and Heisman candidate Lamar Jackson was electric. He finished the night 27-for-44 for 295 yards and a touchdown, and he ran the ball 31 times for 162 yards. Watson had 14 carries for 91 yards and Wayne Gallman had 16 carries for 110 yards, while Deon Cain had four big catches for 98 yards and two scores.

Clemson had five sacks and 10 tackles for loss, but Louisville was 9-of-18 on third down and had the ball for an astounding 37 minutes.

It was Edmond's big tackle that made the difference.

"Fourth down and we have a redshirt junior that hasn’t played until this year," Swinney said. "He missed fall camp and is just now getting healthy – it's awesome to see that guy make a play on fourth down. Last year he was running routes as a wide receiver, and one year later he makes the game-winning tackle That’s special."

The teams were scoreless through the first quarter as the defenses took early control. Clemson brought pressure up the middle repeatedly, however, and Louisville adjusted and put a nice drive together. The Cardinals hit a big play to the tight end at the one and punched it in three plays later for a 7-0 lead with 14:18 left in the second quarter.

Clemson answered with a long drive of its own, marching to the Louisville 16. On first down, however, Watson’s end zone throw was behind Mike Williams and Louisville’s Jaire Alexander intercepted the pass to shut down the Tigers’ first real scoring threat.

Things then got interesting.

Louisville picked up two quick first downs and hit midfield, but a high snap that Jackson wasn’t prepared to receive was fumbled and recovered by Ben Boulware. Two plays later, Watson hit Deon Cain on a 33-yard touchdown pass – Cain backed into the end zone after catching it at the five – and Clemson had tied the game at 7-7.

Louisville then threw an interception – caught by Jadar Johnson – but Watson fumbled it back to Louisville on the next play. Louisville followed that with a fumble of its own – three turnovers in three plays – and Gallman made the Cardinals pay with a 24-yard touchdown run up the middle and Clemson led 14-7 with just over six minutes to play in the half.

Louisville was forced to punt it away, and Tigers once again struck quickly. Watson hit a striding Cain in the end zone for a 37-yard touchdown, and Clemson led 21-7 with 3:47 to play in the half.

The Cardinals responded with a nice drive just before the half, driving inside the Clemson 10 but settling for a Blanton Creque 26-yard field, and the Tigers led 21-10 with 37 seconds left to play first half.

Instead of sitting on the ball and taking an 11-point lead into the locker room, Clemson tried for more points. And succeeded. The drive started with Watson hitting Scott for 23 yards, and that was followed by an interference call that put the ball at the Cardinal 35. Watson hit Williams on a sideline route for 18 yards and then 12 more to the Louisville five. Watson then calmly hit Scott coming on a quick cross for the touchdown and Clemson led 28-10 with five seconds left to play in the half.

Things got intense in a hurry to start the second half. The Tigers took the opening kickoff back to the 27, but on the second play from scrimmage Watson’s pass bounced off the hands of Ray-Ray McCloud and was intercepted by Chucky Williams at the Clemson 36. The Cards made the Tigers pay with an eight-yard scoring toss to James Quick, and Clemson led 28-16 after the extra point was missed.

The Tigers had a quick three-and-out – failing to gain yardage on a 3rd-and-one – and Louisville went down the field again, taking 11 plays to march 64 yards. However, Jackson was stopped by Ben Boulware on a 3rd-and-goal carry, and the Cardinals settled for a 21-yard field goal from Creque as Clemson led 28-19 with 5:21 to play in the third quarter.

Clemson responded by putting together a long drive that was based on the running of Watson and Gallman, and Clemson set up shop inside the Louisville 20. Watson threw a laser to Jordan Leggett inside the five, but Leggett coughed up the ball and Clemson’s scoring chance.

Louisville got more than a field goal, marching straight down the field on a tired Clemson defense, punctuating an outstanding third quarter with a one-yard run by Jackson that made it 28-26 with 45 seconds to play in the third.

Needing a long drive to help the defense, the offense instead went three-and-out after a jailbreak rush forced Watson to throw it away on third down. What did Louisville do? Marched it down the field, and they got a Creque field goal that gave Louisville the lead at 29-28 with 10:23 to play.

How did Clemson respond? Another interception, this one past midfield, and Jackson reeled off a 38-yard run to put Louisville in good shape inside the Clemson 20. Two plays later, Jackson scampered in for the touchdown and Louisville was rolling 36-28 with 7:52 to play.

Artavis Scott put some life back into the stadium with a 77-yard kick return, and Watson hit Williams from 20 yards out for the touchdown. The two-point conversion was missed, however, and Louisville led 36-34 with 7:05 to play.

Clemson forced a quick three-and-out by the Cards, but a booming punt left Clemson with 85 yards to pay dirt. It just eight plays to hit that pay dirt. Watson hit Cain on a 24-yarder to the Louisville 31, and he then hit Leggett on a pass on the sideline that Leggett took into the end zone. The Tigers got the 2-point conversion, and led 42-36 with just over three minutes to play, setting up the frantic final minutes.

Clemson has a short week, traveling to Boston College to take on the Eagles Friday night at Alumni Stadium in Chestnut Hill.

Clemson 42, Louisville 36
Get the latest Clemson gear right here!
Comment on this story