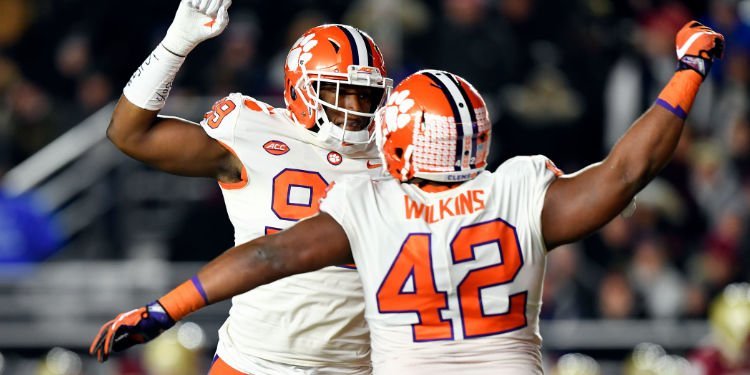 CHESTNUT HILL, MA – Christian Wilkins sat down with head coach Dabo Swinney after Clemson knocked off Boston College Saturday night and opened up a bag of chips, oblivious to the interview Swinney was giving.

Swinney turned to Wilkins and said, “Go ahead and eat.”

Wilkins and the entire defense ate Saturday night, holding Boston College to 113 total yards, including just 24 in the first half. The Eagles rushed 33 times for nine yards, an average of 0.3 yards per carry.

“They had nine yards rushing. I mean, so part of that, they had a couple of really bad snaps that took a lot of yards off, but our guys were really dialed in,” Swinney said. “They're a big challenge schematically with all the different bunch sets and the tight ends, and they create angles, and they create extra gaps, and you've got to get the gaps right. You've got to be really disciplined with the play action, and our guys just did an awesome job. I mean, I'm really proud of our defense.

“I'm giving credit to that D-line. Again, we had great prep. We tackled well, and Dillon is -- man, he's a 250-pound man coming downhill, and we were able to hold him in check, and that was big for us. And then when they did get some balls on the edge on us on some of the play action stuff, we were well-positioned, and we were able to come up and make the tackles. They did not have a lot of big plays on us. So just really tremendous.”

Wilkins grew up in nearby Springfield, Mass, and was a Boston College fan growing up.

“This is definitely just special. Everyone knows I grew up about an hour away from here. Just coming back home and playing in front of friends and family and loved ones and the home crowd was obviously special,” Wilkins said “It meant a lot because of the group of seniors. We just do a great job of leading every day. There's no other group of guys that I'd want to do it with, so it was a special opportunity. We did something tonight that's never been done before, so I'm definitely thankful for that.

“I want to give a lot of respect to Boston College because they don't make it easy. They move people and they're really physical. You have to come with the right mindset and I feel like we did that tonight. You have to be disciplined and just play physical. The coaches let us play and put the game in our hands defensively and everyone executed so that was great to see.”

Wilkins also made an appearance on offense – facing 4th-and-goal at the two, the Tigers brought in the Fridge Package with Wilkins and Dexter Lawrence. The fake to Wilkins allowed tight end Milan Richard to get open for the score.

“I know I've got special talents with my running abilities, so I always thought there was a chance that I'd line up in the backfield,” Wilkins said. “I'm happy that we scored on that play even though I was the decoy on that one. I've shown my abilities so now people know I'm a threat. I'm in the scouting report now - 'Watch 42 when he gets back there.'”

Wilkins said that while the defense was dominant, he still sees room for improvement.

“We've been playing well but there's always room to improve,” he said. “Definitely, I'm grateful for the mindset of the defense. We try to bring it every day in practice and challenge each other and stress ourselves but there's always room for improvement. Until we shut someone out - no yards passing, no yards rushing - we're never satisfied. I feel like the mindset is that we're always hungry and we always want the best on defense.”

Swinney says he appreciates the leadership of Wilkins.