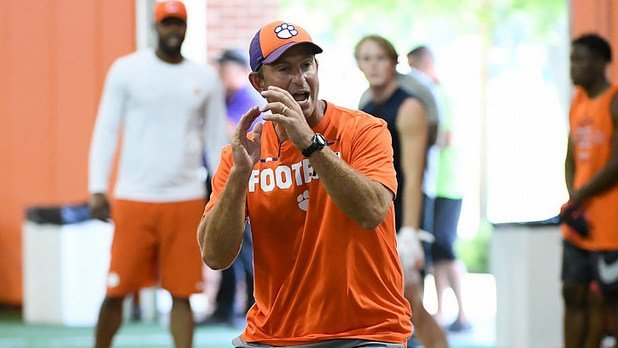 OXFORD, MS – And just like that, it’s football season once again. Sort of.

Clemson’s baseball team was bounced from the NCAA Oxford Regional in Mississippi Sunday afternoon, ending the Tigers’ spring sport seasons that we cover. Thus begins a long stretch of no games – it’s 87 days until Clemson kicks off the 2019 football season at home against Georgia Tech – but that stretch isn’t without interest.

Dabo Swinney’s media golf outing is in a mere 44 days and will be quickly followed by the ACC Football Kickoff. Following a brief pause, fall practice will get underway and we will be off to the proverbial races.

However, as one friend pointed out to me Sunday evening, it’s always football season in the South. And football is back in town this week with the start of Swinney’s high school camps. Camp starts this Tuesday and runs through Thursday and follows the same schedule the following week.

Things are different now than they were a few years ago. The Tigers went into camp in June with just two or three commitments for that year’s recruiting cycle and I cautioned everyone that the commits would start to fall during camp, following the close of camp and the All In Cookout.

The coaches would watch that year’s crop of prospects in the hopes of landing a commitment or a promise to attend the Cookout.

Following the commitment of 3-star safety Tyler Venables Sunday, the coaching staff has a whopping 17 commitments for the 2020 recruiting cycle and have precious few spots remaining. As the Clemson brand has grown and the Tigers have added two National Championships, the coaching staff is more particular with their offers.

For many prospects, that means a trip to camp where the coaches can work with the player, get to know him in a 1-on-1 setting and find out not only how coachable the player is but what he brings to the team. That includes Miami (FL) Gulliver Prep tight end Diego LaMonica who has visited Clemson and been in constant contact with the coaches but has yet to draw an offer. That could change after his visit this week.

The week is also essential for laying the groundwork for 2021 and beyond. Heading into last June 2020 quarterback commit DJ Uiagalelei had never visited Clemson but showed up for the final week of camp with coach Terry Bullock in tow. Uiagalelei worked out for the coaches in the afternoon, was offered that evening, and the rest is history.

“I knew for sure, well the time I felt it, was probably when I was out there in June - almost a year ago,” Uiagalelei told TigerNet in a special interview. “It was the first time I had been out there. I just felt like this was the place I needed to be. That was when I felt it. I felt like this is definitely the place for me, and this definitely where I want to be. This is where I want to play.”

It was also in last year’s camp when the Tigers made a move for offensive line commit Walker Parks, a fast-riser who now stands as one of the nation’s top prospects at his position.

Football is back, and it comes at the right time.