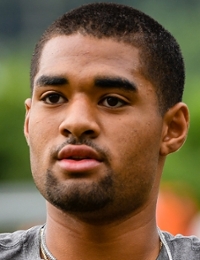 Quarterback
B I O
Listed as the top player in the nation by PrepStar and ranked second according to Rivals.com behind Clemson signee and classmate Bryan Bresee … top quarterback in the nation according to Rivals.com and PrepStar… led his team to No. 1 ranking by MaxPreps and USA Today after guiding them to a 7A state championship in California … will play in the U.S. Army All-American Bowl on Jan. 4, 2020 in San Antonio, Texas … National Offensive Player of the Year and first-team All-American by USA Today in 2018 as a junior … threw for 10,496 yards in his high school career and had 127 career touchdowns against just 11 interceptions … completed 585-of-871 passes for a 66 percent completion mark … averaged 18 yards per completion … also rushed for 1,103 yards and 18 touchdowns in his career, a 6.1 yard-per-carry average. Ranked as the No. 1 overall player in the nation, the best quarterback and best player in California by PrepStar … ranked as the No. 2 overall player in the nation by Rivals.com, which also called him the top quarterback and top player in California … 247Sports ranked him the No. 3 overall player in the nation, the top quarterback and second-best player from California. Played for Jason Negro at St. John Bosco High in Bellflower, Calif. … led his team to a 13-1 record and state championship in 2019 … won state championship on Dec. 14, as he was 24-of-29 for 410 yards and four touchdowns while also gaining 67 rushing yards on just five carries with another touchdown on the ground … led team to thrilling semifinal victory over Mater Dei, which had beaten St. John Bosco in the regular season and entered the game ranked No. 1 in the nation by USA Today and MaxPreps … led St. John Bosco to victory out of a 28-5 deficit in that game, completing 26-38 for 446 yards and five touchdowns … completed 222-of-344 passes for 4,225 yards and 48 touchdowns against just two interceptions in 2019, averaging 19 yards per completion and 12.3 yards per attempt … added 412 yards rushing and eight touchdowns … as a junior in 2018, led team to a 13-1 record with only loss coming to Mater Dei in state playoffs … had exceptional game against Miliani, completing 25-of-31 passes for 380 yards and six touchdowns … completed 13-of-15 for 361 yards and six scores against Oaks Christian … completed 179-of-257 passes for 3,366 yards and 48 touchdowns against just seven interceptions on the year and added 50 carries for 312 yards and six rushing touchdowns … as a sophomore in 2017, completed 184-of-270 for 2,905 yards and 31 touchdowns against just two interceptions … posted 67 rushes for 379 yards and four touchdowns as a sophomore … helped team to 10-2 record that year … helped lead team to 40-38 victory against Santa Margarita by throwing for 405 yards and two scores and followed that performance with 320 yards and four touchdown passes against Servite … completed 20-of-21 passes and two scores against Mater Dei in state playoff game. Committed to Clemson on May 5, 2019 … wore No. 5 in high school … recruited to Clemson by Brandon Streeter … expected to enroll at Clemson in January 2020 … name pronounced ooh-ee-UNGUH-luh-lay.