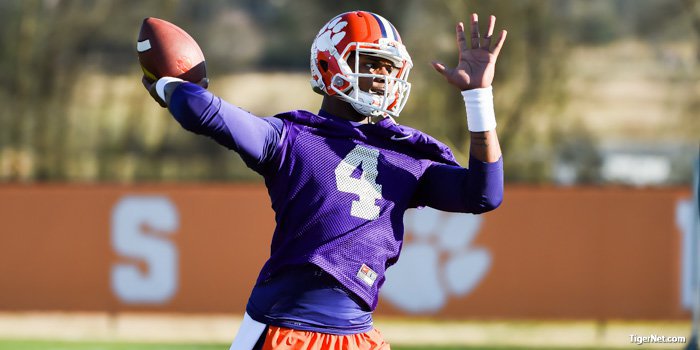 CLEMSON – Spring practice is about new beginnings, and Monday’s first practice of the spring was about the beginning of a process that will take Clemson from number two to number one.

Head coach Dabo Swinney met with the media Monday to discuss the start of the spring, and he said this spring is about trying to get his team to number one.

“First of all, it's good to be back on the grass today. Really thankful for a beautiful day here in Clemson to get back to football. I want to revisit last year - we were really proud of our team. What a special team. So many good things - finished number two and today is about trying to get to number one,” Swinney said. “That's really what it's about. We're back to work. I'm really proud of our staff. We've had a great and fast "off" season. We have really put a lot of work into trying to get better - studying ourselves, our quality control, our self-evaluation, our challenging of everything that we do and how we do it and why we do it. We're looking at all of the good things that we did and the bad and trying to continue to be good at certain things and improve areas where we didn't do so good. I really think we've done a great job evaluating ourselves and really getting a good plan together for what we want to accomplish this spring. We've got our team goals and individual goals.

“Today is about starting that process. Spring practice is about details and going back to the basics. We're a young football team. We've got twenty-two scholarship seniors and juniors on this team, so we'll have sixty-three freshman and sophomores. We have a lot to do from a teaching standpoint and you can't ever forget that as a coach. We have some guys that could go play today, but not a lot of those guys. So, spring is about really building a great foundation from a core values standpoint - who we are as a program. We have to come out of spring with a great foundation that we can take into this summer, so that when we get done with summer we can feel great about where we are in camp, so when camp is over we can be ready to play. Because we're going to have to be ready to play, especially opening up down at Auburn.”

Swinney said there is a lot to like about a group that he thinks will have more competitive depth than last season.

“I like this group - I really do. This is a group that is going to really gel quickly. I've already seen a good chemistry and a good transition of leadership in our off season with the mat drills and all of the things that we do. Just seeing how these guys have responded,” he said. “I'm very encouraged. I think the biggest thing about this team is it's a new team, new chemistry, new leadership, but this team is going to have much more competitive depth than we had last year. If you look at last year's team, defensively, I felt like our first eleven, twelve, thirteen guys could go play against anybody, anywhere, anytime, but after that there were so many freshmen. Not necessarily a drop off in talent, but a huge drop-off in experience.

“I love Austin Bryant, I love (Richard) Yeargin and Clelin (Ferrell), but they weren't going to beat out Shaq and Dodd. I love Kendall Joseph and those guys, but it was going to be hard to beat out BJ Goodson, just because of the experience and knowledge. It's hard to just get that. That's good to have that type of "quality" guy back, but what I don't like is that you don't have that competitive depth, and you don't have that iron sharpening iron - the sense of urgency that you like to have at every position. We were very, very fortunate last year. We were able to pretty much keep those eleven to twelve guys defensively healthy. It allowed us to develop those young guys at a healthy pace, so when all of a sudden when we're in the Orange Bowl, and we need Austin Bryant, he's ready to play - and at a level that we need him to play at.”

He especially likes the competition that will develop defensively.

“The flip side of this football team defensively is the talent is good, but the competition is going to be great and that will make us better as a team,” he said. “The flip side of it offensively, we had so many guys last year that we weren't counting on, especially on the offensive line that really came through for us - a lot of young guys that are now proven. Mitch Hyatt is not a myth anymore, he's not a theory. (Jake) Fruhmorgen is not a hope anymore. (Justin) Falcinelli is not a myth. We know so much more right now and the confidence of our offense is just at another level from where we were this time last year. Same thing at quarterback - last year, we didn't have Deshaun Watson going through spring. Kelly Bryant was just trying to figure out what the formations were. I think we're in a situation now between Kelly and Nick, and Tucker was just getting here, where we're going to be in a much better spot from a depth standpoint as far as the ability to truly go and run the offense and win.

“Same thing at running back. We're going to have more balance and more competition at tailback than we had last year with the addition of Adam Choice, the experience of Fuller, the process that Dye has gone through. I'm excited about that group. Leggett this time last year, we hoped that what we were seeing was going to produce some good fruit, well, he was a Mackey finalist. Now, you have him back and he is on another level mentally. The development of Milan (Richard) and Cannon (Smith) and Garrett (Williams) and (D.J.) Greenlee. You lose Charone Peake, but you add Mike Williams back.”

Swinney then said that there is no telling which player will step forward to be the next Hunter Renfrow.

“We played several freshmen last year at receiver. Renfrow was a folk hero that y’all heard about from fall camp and now everywhere I go I hear, ‘I got the next Renfrow for you coach.’ Trevion (Thompson) and Deon and Ray-Ray McCloud were all freshman,” he said. “They all have experience now and they've all done some things and have a better understanding, so I like where our team is. (Greg) Huegel wasn't even on the team this time last year. Now, he's made All-American. (Andy) Teasdall hadn't really "done it" yet. Seth (Ryan) was taking over the holding duties and did a great job for us. We are starting over at snapper, but (David) Estes was the snapper the entire second half of the ACC Championship game. Jim Brown got dinged with a concussion and was out for the second half and we never missed a beat with Estes. At least he got a little bit of experience, which will be where we start. Austin Spence will have a chance to compete for that job, so will (Bradley) Tatko and (Patrick) Phibbs. Those guys will all get a chance to compete. That's the one thing we've got to get figured out.”