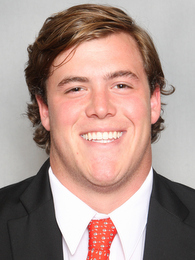 Long Snapper
B I O
Original walk-on who earned a scholarship in August 2015 ... served as long snapper on team that finished No. 2 in the country ... played 19 games in his career ... three-time ACC Academic Honor Roll member.

2015: Appeared in all 15 games, with great success on snaps for punts and placekicks ... snapped perfectly despite torrential rain conditions in win over No. 6 Notre Dame ... named co-special teams player-of-the-game with Andy Teasdall by the coaching staff ... coaches player-of-the-game in the win over South Carolina, a 37-32 triumph in Columbia ... missed some time late in the ACC Championship Game after suffering a concussion in the win over the Tar Heels.

2012: ACC Academic Honor Roll member ... played one game ... snapped on one punt against Ball State on Sept. 8; it was his first career game.

We have initiated a counter attack on China...