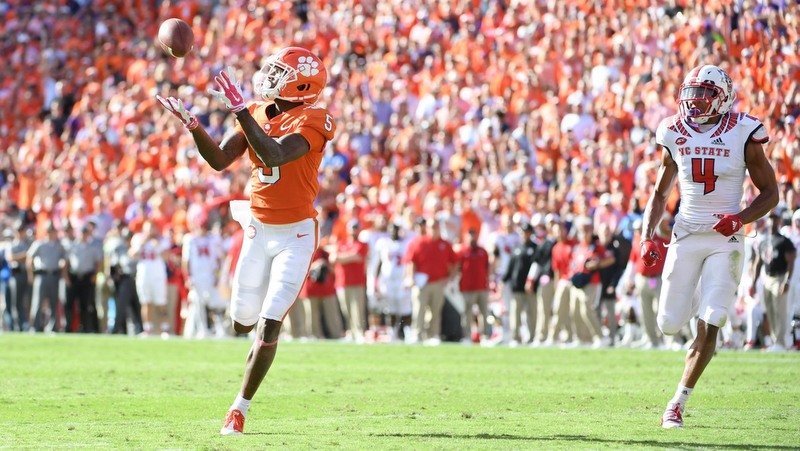 Tee Higgins had a big first half for the Tigers

CLEMSON – Clemson used the off week to get healthy and calm the storms that had occurred in the previous two weeks.

The Tigers came out looking like a well-oiled machine and took a 24-0 lead over N.C. State to the locker room at halftime Saturday afternoon in Death Valley.

PLAYER OF THE HALF: For the first time all season, quarterback Trevor Lawrence looked in total control of the offense. The first drive of the game was about as textbook as it gets and led to seven points. Lawrence made the throws to the sideline look easy and wasn’t afraid to use it feet to pick up a first down. He finished the first half 21-of-29 for 244 yards and a touchdown and five carries for 12 yards.

STAT OF THE HALF: Dabo Swinney is known for playing guys early and often and in the first half of a key division game between two undefeated teams, Clemson played 54 players.

*Higgins: Clemson wide receiver Tee Higgins makes Lawrence’s job look easy. He was catching everything thrown his way and finished the first half with six catches for 100 yards and touchdown. The touchdown was a 46-yard strike from Lawrence.

*Third downs: Clemson was successful on third down, especially using the sideline throw from Lawrence. The Tigers were 4-of-7 on third down, while the defense held the Wolfpack to just 1-of-5.

*The crowd had a huge impact on N.C. State in the first half causing multiple false starts, a delay of game and even factored into the fumble that was recovered by Dexter Lawrence with 2:15 to play before halftime.

*K’Von Wallace had a huge interception with just 40 seconds to play before halftime. He and a gang of Clemson defenders returned it to the four-yard line.

*Clemson mishandled the third down situation with time running out in the half, but still managed to get a field goal.

TURNING POINT OF THE HALF: Clemson set the tone for the game with the opening drive.

The Pack played seven or eight defenders in the box, daring Lawrence to beat them through the air, and Lawrence used a 12-yard run and two passes to Tee Higgins to set up a three-yard scoring run by Etienne. With 11:23 remaining in the first quarter, Clemson held a 7-0 lead.

WHAT CLEMSON NEEDS TO DO TO WIN: The offense needs to continue to try to use the passing game to open up the running game. Usually, it’s the other way around, but N.C. State is determined to make Lawrence beat them through the air. If Lawrence can hit a couple of deep passes, it should force the Wolfpack to take a safety out of the box open up the ground game for Travis Etienne.