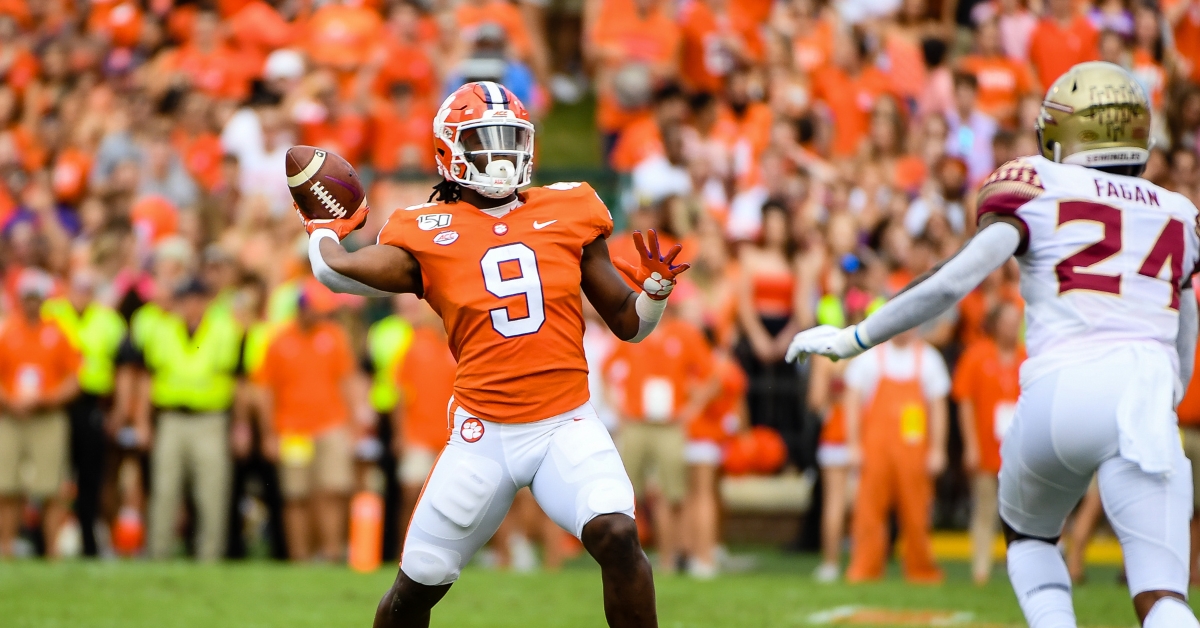 Etienne throws a pass against FSU.

CLEMSON – Clemson’s offense came out on the attack Saturday against Florida State, with a focus on getting running back Travis Etienne more touches on designed runs. Etienne was also tasked with executing a halfback pass, which worked to perfection.

Etienne tossed a 23-yard strike to Justyn Ross on the game’s second play to help set up the Tigers’ first touchdown, and then finished the day with 17 carries for 127 yards. It was Etienne’s first 100-yard effort since the opener against Georgia Tech.

Co-offensive coordinator Tony Elliott told Etienne that the pass was coming, regardless of where the ball was on the field.

“I told him, I said, look, we're running it regardless of the hash, so you better learn how to throw it going to your left being right-handed,” Elliott said Monday. “But I tell you what, he had two weeks to kind of recenter himself. You know, didn't have his best game up in North Carolina from a pass protection standpoint. And so it was good to see him come out with the right mindset and, and just overall we wanted to be aggressive. Let these guys know who we are and what has made us successful. And when we get off to a fast start, it puts a lot of pressure on the opposing team and allows our defense to kind of pin their ears back. And so it was good for those guys to come out and execute those first couple of plays and go right down the field and score on that first drive.”

Elliott also went into the game wanting to make sure Etienne got a certain number of touches on designed runs.

“I think that I have to do a good job in certain situations of taking the RPO (run-pass option play) off and then just calling it where it's a designed run regardless of what the defense is,” he said. “If you give Travis the ball, he's going to break a tackle or two. And so it doesn't have to be perfect. And then taking a little bit of stress off of Trevor, too, that he doesn't have to make every situation right. And then you saw the early in the game on first down we jumped in some 12 personnel stuff with some flash motion stuff that forced the ball to him.

“So just incorporating that and not just making it a situation where you're putting all the onus on the RPO to bail you out. Sometimes you just got to force the issue. And that's what we did. Especially down there once we got inside the red zone too, took some of the RPOs off. There were a couple where we left the RPO on and there were a few where we just said, 'Hey, take the RPO off and give it to Travis and let's go.'”

Elliott said over half of Clemson’s playcalls are RPOs.

“You know, I'd say probably at least 60 percent of it's going to be RPO based off what the defense gives you. And then definitely in short-yardage, you take a lot of the RPOs off of it, but sometimes you leave it on just depending on how their tendencies are,” Elliott said. “But I'd say that's probably a fair assessment, but sometimes you just need to just take it off. Even when you call the RPO-looking concept, take the RPO off and let Travis get the ball.”

#Clemson has had run-pass options (RPOs) be a staple of the attack this season, but Tigers co-offensive coordinator Tony Elliott says they made it a priority to get Travis Etienne the ball versus FSU.