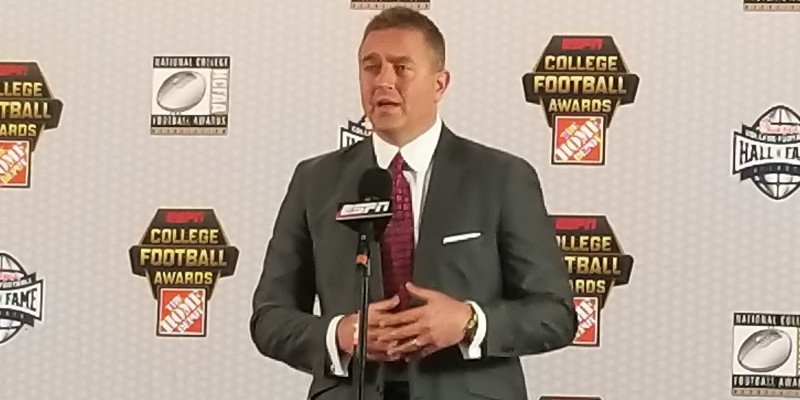 Kirk Herbstreit thinks Clemson is better than it was a year ago.

Some ESPN college football analysts are finally getting on board with the idea that Clemson might be a better team than it was a year ago and might just be better than media darling LSU.

LSU sits atop the College Football Playoff rankings, and deservedly so. The Bayou Bengals have multiple wins over ranked teams, including a beatdown of Alabama in Tuscaloosa a few weeks ago.

Clemson started the season ranked No. 1 nationally, has won all but one of its games in dominating fashion and is on a historic pace both offensively and defensively. Still, the Tigers have slipped in the national narrative because of a one-point win at UNC in late September.

Since that time, however, the Tigers have been dominant according to analyst Tom Luginbill.

“The problem is those that were running their mouths and we talked about it. I can't tell you how many times we talked about it on this show during that time was they are human. It's okay,” Luginbill said on Mark Packer’s radio show this week. “They are going to make poor plays. They are not going to be perfect every time. And again we became so conditioned after seeing it look so easy a year ago. That you are going to go out there and put your uniform on and everything is going to be easy. It doesn't work that way. I for one believe that the North Carolina game, which by the way was followed by a bye week. From that point on was when everything changed. It was a great message for Dabo Swinney to have for his football team of look what can happen. To me it is good for that to happen sometimes to a football team."

"Let's compare some narratives here. So you have that narrative about the Clemson offense. And the problems and maybe Trevor Lawrence not being perfect and having turnovers and so on and so forth,” Luginbill said. “How much have you heard anybody talk about the 600 yards of offense that LSU just gave up to Ole Miss? That is what I am talking about. That is my point. Right now, LSU is as good as there is in college football on offense. And everything they touch seems to turn to gold. But they have some warts now on defense.”

Kirk Herbstreit thinks Clemson is better than the team that went 15-0 last season.

"And the reality is they're (Clemson) actually better. Believe it or not, they're a better team right now than they were a year ago, where they finished 15-0. It is scary,” Herbstreit said. “Now, they don't have Christian Wilkins and Ferrell in that defensive line and Dexter Lawrence. But they're doing it differently. Their strength now is the back seven, the linebackers, the safeties and the corners. An abundance of leadership on that side of the ball.

“Offensively, they're better at quarterback with Lawrence. They're better on the offensive line. They're better at receiver. They're better in the backfield. I mean, they're a dangerous team and I don't think people are really going to pay attention to them until we get to the Playoff and they end up playing whoever they get to play in that first round because nobody's going to care when they play South Carolina on the road in Columbia, nobody's going to care when they go to Charlotte and play in the ACC championship. It's going to take them to, like I said, go all the way into the end of the Playoff until people are going to realize, potentially, ‘Wow, Trevor Lawrence, Clemson. They're good.'"