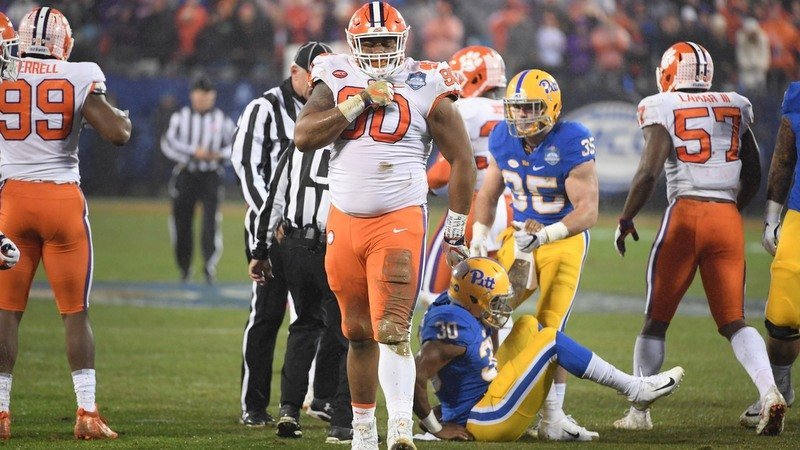 CHARLOTTE, NC – The weather in Charlotte Saturday night was awful, with blowing rain and wind for most of the night. We’ll call it a Clemson Reign.

Travis Etienne scored two touchdowns and ran for 156 yards as No. 2 Clemson defeated Pitt 42-10 in the ACC Championship Game at Bank of America Stadium, likely securing a berth in a fourth consecutive College Football Playoff.

Clemson improves to 13-0 overall and will wait to see where the College Football Playoff committee sends the Tigers for the New Year – either the Orange Bowl or the Cotton Bowl. Pitt falls to 7-6 on the season.

Clemson now has 18 ACC championships in school history, the most in the history of the conference. The Tigers are the first ACC program to win four consecutive ACC titles outright. Florida State had a streak of nine straight ACC titles, but that streak included two co-championships that prevented Bobby Bowden's Seminoles from ever winning four straight titles outright.

Pitt won the toss, elected to defer, and promptly gave up a touchdown 13 seconds later. Etienne took the first handoff of the game, bounced over the right side, broke a tackle and outran the defense the rest of the way for a 75-yard touchdown run. The previous long was a was Josh Nesbitt pass to Demaryius Thomas in 2009, a play that covered 70 yards.

Two series later, Isaiah Simmons stripped Pitt quarterback Kenny Pickett of the football at the Panther 21, and Christian Wilkins grabbed the ball out of the air and returned it 18 yards to the Panther 3-yard line. Etienne bounced over from three yards out a play later and Clemson led 14-0.

The Panthers finally found some running room late in the first and put together a 9-play scoring drive that ended with a 38-yard field goal. Late in the first, Clemson led 14-3.

After the first two scoring drives the Clemson offense bogged down, and following a short punt the Panthers put another score on the board. The Tigers had taken over at their own 1-yard line and gained just four yards on three plays. The snap on the punt was bounced to Will Spiers, and his 34-yard punt gave the Panthers good field position at the Clemson 39.

Six plays later the Panthers scored on Qadree Ollison’s one-yard run and Clemson’s lead was just four at 14-10 with 7:56 to play in the half.

Needing a response, the Tigers got a big play from its playmaker. Etienne’s 45-yard run started a 7-play, 75-yard drive that ended with a 5-yard touchdown pass from Lawrence to Tee Higgins. The ball was a perfectly thrown fade into the right corner that Higgins snatched out of the air, getting one foot down in bounds, and Clemson led 21-10 with 4:57 to play in the half.

The Panthers had one last chance to score, but AJ Terrell intercepted Kenny Pickett’s pass and returned it 31 yards to the Panther 10-yard line with 29 seconds remaining. Lawrence promptly hit Higgins on a crossing route for a 10-yard score and Clemson led 28-10 with 25 seconds left in the half.

It took the Tigers until the fourth quarter to put another point on the board. Taking over at the 31, Lawrence hit Tee Higgins on a 21-yard middle strike to open the drive. Lawrence added an 8-yard run, and the Tigers opened the playbook. Lawrence handed off to the running back, who turned around and tossed the ball back to Lawrence on a flea-flicker. Lawrence launched the ball to Ross for a 38-yard gain to the Pitt two. Adam Choice finished the drive with a one-yard run and Clemson led 35-10 early in the fourth quarter.

Clemson vs. Pittsburgh Stats
Get the latest Clemson gear right here!
Comment on this story